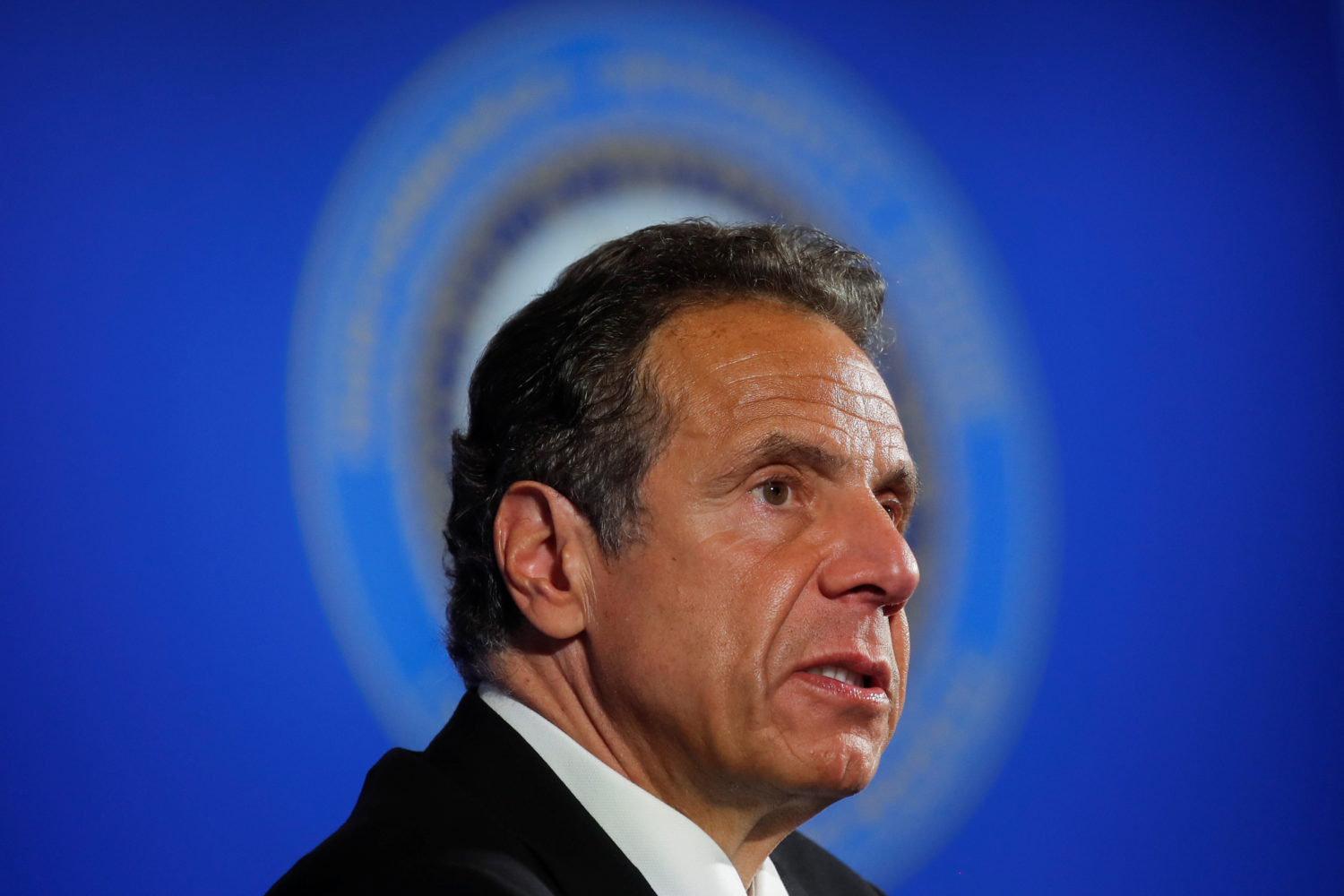 (Reuters) – New York Governor Andrew Cuomo said he would sign an executive order on Thursday authorizing businesses to deny entry to anyone who does not wear a mask or face covering, stressing masks were critical to preventing the spread of the novel coronavirus. 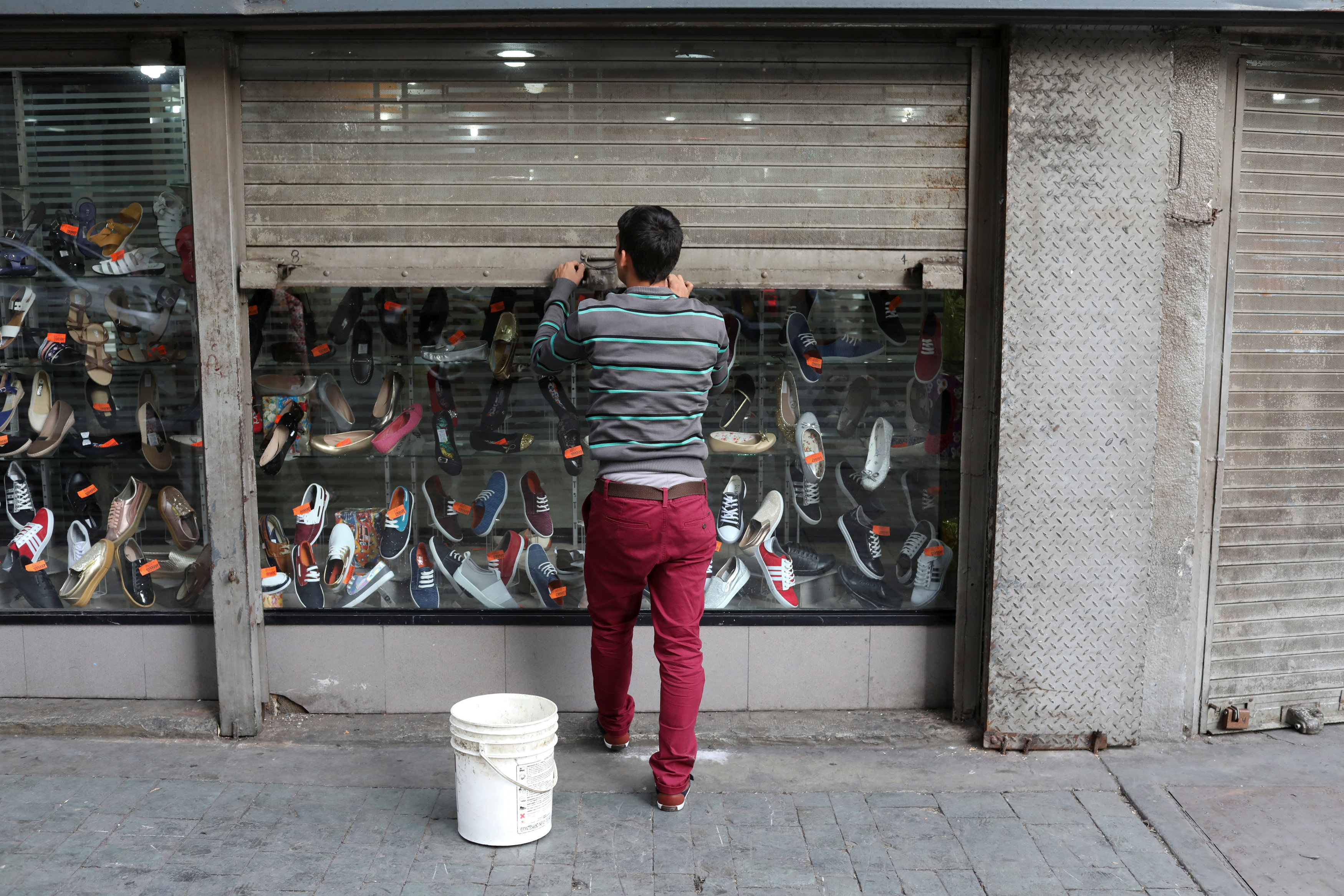 By Alexandra Ulmer and Anggy Polanco

CARACAS/SAN CRISTOBAL, Venezuela (Reuters) – A wave of looting by hungry mobs across Venezuela has left streets of shuttered shops in provincial towns and pushed some store owners to arm themselves with guns and machetes, stirring fear that the turmoil could spread to the capital Caracas.

Worsening food shortages and runaway inflation have unleashed the spate of pillaging since Christmas in the South American country, in which seven people have reportedly died.

The unrest was sparked by shortages of pork for traditional holiday meals, despite socialist President Nicolas Maduro’s promise of subsidized meat to alleviate shortages.

Looters have ransacked trucks, supermarkets and liquor stores across the nation of 30 million people, which ranks as one of the most violent in the world.

The plunder is heaping more pain on battered businesses, raising questions about how much longer they can survive. Venezuela, once one of Latin America’s richest countries, is suffering a fifth straight year of recession and the world’s highest inflation rate, which the opposition-run Congress says topped 2,600 percent last year.

In the first 11 days of January alone, some 107 lootings or attempted lootings have taken place, according to the Venezuelan Observatory for Social Conflict, a rights group.

In one of the most dramatic incidents, a mob slaughtered cattle grazing in a field in the mountainous western state of Merida.

Skeptical that authorities can protect them, shopkeepers in the Andean town of Garcia de Hevia in the neighboring state of Tachira have taken matters into their own hands.

“We’re arming ourselves with sticks, knives, machetes, and firearms to defend our assets,” recounted William Roa, the president of the local shopkeepers’ association.

Roa, who owns a restaurant and liquor store, estimated that more than two-thirds of stores in the small town near the Colombian border were shut.

“A person spends the night in each store and we communicate using WhatsApp groups, coordinating by block 24 hours a day,” he said.

In Ciudad Guayana, a former industrial powerhouse on the Orinoco river in eastern Venezuela, many stores remain closed after a wave of nighttime lootings.

Businessmen in Caracas now fear the lootings, so far concentrated in the poorer and more lawless provinces, will spread to the sprawling capital, with its teeming hillside slums.

The owners of patisserie Arte Paris, in the city’s gritty downtown, reinforced the storefront with metal shutters last month. They now only stock ingredients like sugar for a handful of days and have considered hiring a costly nighttime guard.

“The fear is real,” said Sebastian Fallone, one of the owners, as men and children begged patrons for food. “I leave at night without knowing what I will find the next morning.”

Government critics say Maduro’s refusal to reform the OPEC nation’s floundering economy is to blame for the chaotic fight for survival in the country home to the world’s largest crude reserves.

With a presidential election looming this year, Maduro retorts that Venezuela’s oil-reliant economy is under attack by U.S.-backed saboteurs seeking to stoke conflict and discredit socialism in Latin America.

While videos of ransacking have gone viral, Maduro’s government has stayed largely mum. The Information Ministry did not respond to a request for information on the scale and impact of the looting.

The unrest has also stoked fears Venezuelan society could unravel as chaos sets in, fuelling mass emigration to nearby South American countries or a full-blown social explosion at home. 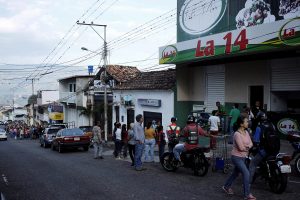 People line up outside a supermarket with its security shutters partially closed as a precaution against riots or lootings, in San Cristobal, Venezuela January 16, 2018. REUTERS/Carlos Eduardo Ramirez

“Small-scale protests will be numerous and increasingly violent; any of these protests could contain the spark to serious unrest,” said consultancy Teneo Intelligence in a note to clients about the year ahead in Venezuela.

In an effort to curb voter anger over inflation, the government agency tasked with ensuring “fair prices” ordered some 200 supermarkets to slash their rates this month, triggering frenetic buying.

Roadside lootings have also scared truck drivers, disrupting the food distribution chain that is traditionally slower anyway in January because of holidays.

For Mery Cacua, manager of La Gran Parada, a supermarket chain in Tachira’s state capital San Cristobal, it has become too much to handle.

“We’re closing in two weeks. There’s no hope anymore,” said Cacua, adding she and her siblings had not yet mustered the strength to break the news to their 87-year-old father, who founded the business 60 years ago.

The family does not know what to do but is considering starting from scratch in Colombia.

Venezuelan supermarkets that remain open are often a shadow of what they once were. Many shelves are barren and poor Venezuelans increasingly mass outside stores, imploring entering shoppers to buy them goods.

“What are they going to loot here? There’s nothing. The warehouse is empty,” said an employee at a big supermarket in Caracas, as a colleague behind him filled empty shelves with water bottles to make them look stocked.