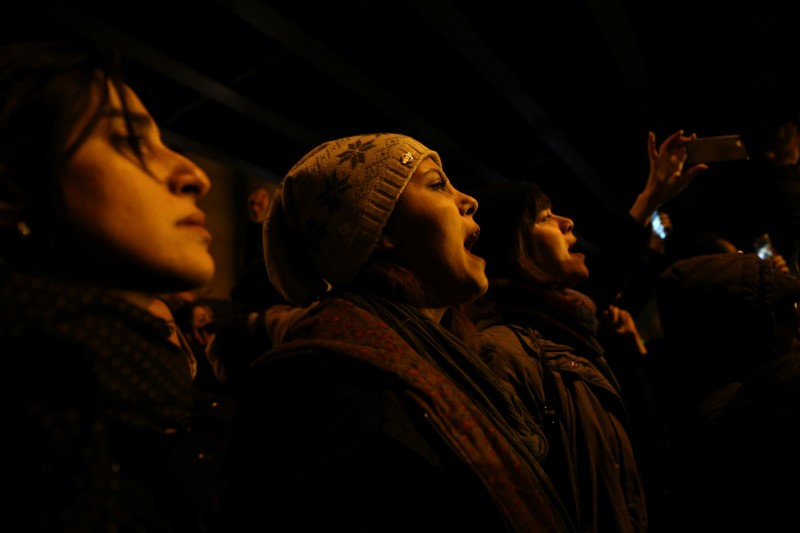 DUBAI (Reuters) – Protesters denouncing Iran’s clerical rulers took to the streets and riot police deployed to face them on Monday, in a third day of demonstrations after authorities acknowledged shooting down a passenger plane by accident.

Demonstrations, some apparently met by a violent crackdown, are the latest twist in one of the most serious escalations between the United States and Iran since the 1979 Iranian revolution swept the U.S.-backed shah from power.

Video from inside Iran showed students on Monday chanting slogans including “Clerics get lost!” outside universities in the city of Isfahan and in Tehran, where riot police were filmed taking out positions on the streets.

Images from the previous two days of protests showed wounded people being carried and pools of blood on the ground. Gunshots could be heard, although the police denied opening fire.

U.S. President Donald Trump, who raised the stakes last week by ordering the killing in a drone strike of Iran’s most powerful military commander, tweeted to Iran’s leaders: “don’t kill your protesters.”

Tehran has acknowledged shooting down the Ukrainian jetliner by mistake on Wednesday, killing all 176 aboard, hours after it had fired at U.S. targets in Iraq to retaliate for the killing on Jan. 3 of General Qassem Soleimani in Baghdad.

Iranian public anger, rumbling for days as Iran repeatedly denied it was to blame for the plane crash, erupted into protests on Saturday when the military admitted its role.

Scores, possibly hundreds, of protesters were videoed at sites in Tehran and Isfahan, a major city south of the capital.

“They killed our elites and replaced them with clerics,” they chanted outside a Tehran university, referring to Iranian students returning to studies in Canada who were on the plane.

Reuters could not authenticate the footage. State-affiliated media has reported protests in Tehran and other cities but has provided few details.

“At protests, police absolutely did not shoot because the capital’s police officers have been given orders to show restraint,” Tehran police chief Hossein Rahimi said in a statement on state media.

Tehran’s showdown with Washington has come at a precarious time for the authorities in Iran and the proxy forces they support to wield influence across the Middle East. Sanctions imposed by Trump have hammered the Iranian economy.

Iran’s authorities killed hundreds of protesters in November in what appears to have been the bloodiest crackdown on anti-government unrest since 1979. In Iraq and Lebanon, governments supported by Iran-backed armed groups have faced mass protests.

In his latest tweet directed at Iran, Trump wrote on Sunday that “I couldn’t care less if they negotiate. Will be totally up to them but, no nuclear weapons and ‘don’t kill your protesters’.”

Iran’s government spokesman dismissed Trump’s comments, saying Iranians were suffering because of his actions and they would remember he had ordered the killing of Soleimani.

Trump had precipitated the escalation with Iran since 2018 by pulling out of a deal between Tehran and world powers under which sanctions were eased in return for Iran curbing its nuclear program. Trump says he wants a more stringent pact.

Iran has repeatedly said it will not negotiate as long as U.S. sanctions are in place. It denies seeking nuclear arms.

The recent flare-up began in December when rockets fired at U.S. bases in Iraq killed a U.S. contractor. Washington blamed pro-Iran militia and launched air strikes that killed at least 25 fighters. After the militia surrounded the U.S. embassy in Baghdad for two days, Trump ordered the strike on Soleimani.

Iran retaliated on Wednesday by firing missiles at Iraqi bases where U.S. troops were stationed, but did not kill any Americans. The Ukrainian plane, on its way to Kiev, crashed shortly after. Most of those killed were Iranians or Iranian dual nationals. Scores were Canadians, many dual nationals who had traveled to Iran to visit relatives.

After days of denying responsibility, commanders of Iran’s Revolutionary Guards issued profuse apologies. Iran’s president called it a “disastrous mistake”. A top commander said he had told the authorities on the day of the crash it had been shot down, raising questions about why Iran had initially denied it. 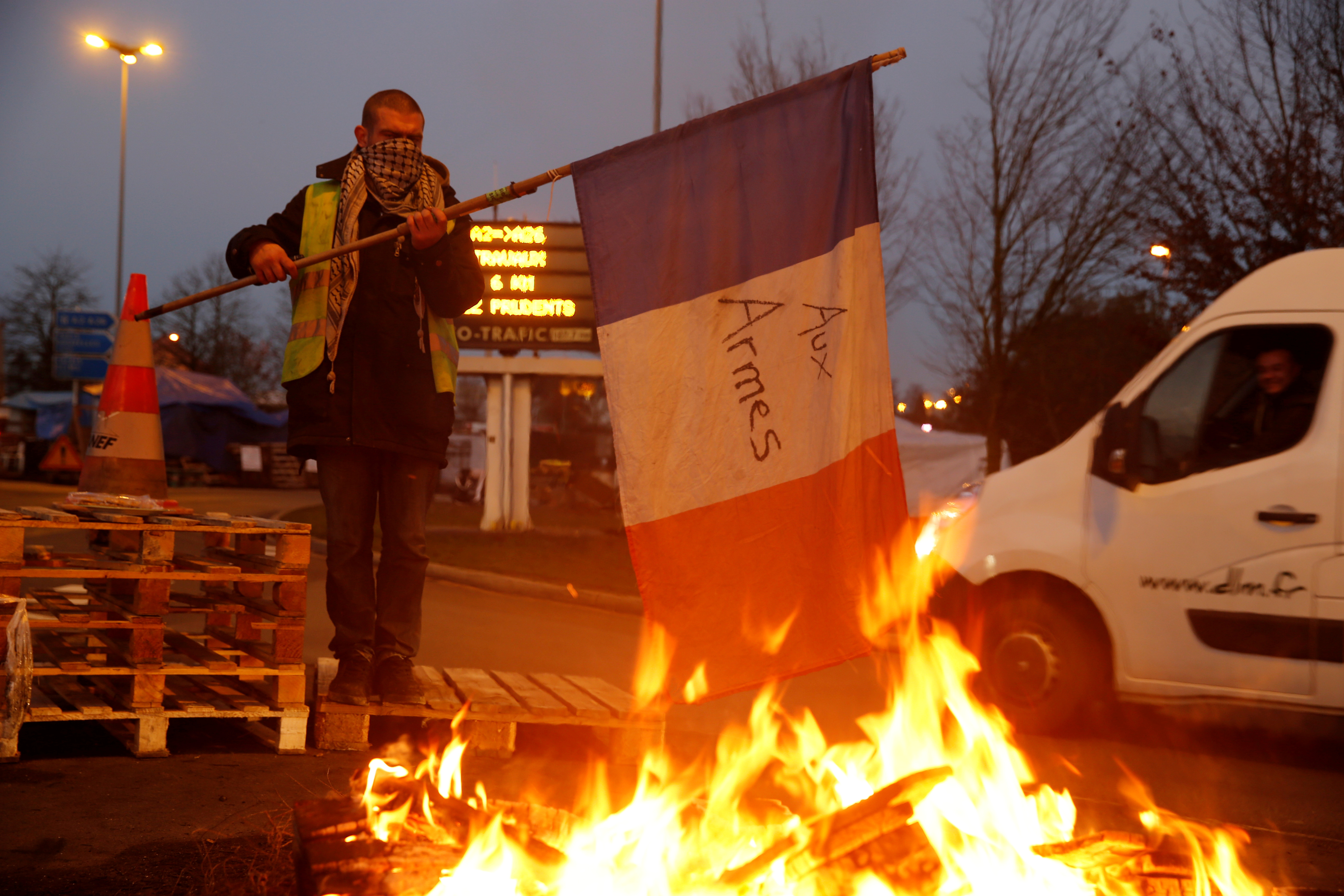 By Sudip Kar-Gupta and Richard Lough

PARIS (Reuters) – President Emmanuel Macron could amend a wealth tax that critics say goes too easy on the rich, his government indicated on Wednesday, a day after suspending further fuel-tax hikes in the face of protests across France over living costs.

The Macron administration is struggling to defuse the anger driving the “yellow vest” protests, as it reels from the worst riots seen in central Paris in five decades last Saturday.

Government spokesman Benjamin Griveaux said all tax-related policies needed to be periodically evaluated and, if deemed not to be working, should be changed. He said the wealth tax could be reassessed in the autumn of 2019.

“If a measure that we have taken, which is costing the public money, turns out not to be working, if it’s not going well, we’re not stupid – we would change it,” Griveaux told RTL radio.

The unrest over the squeeze on household budgets comes as OECD data showed that France has become the most highly taxed country in the developed world, surpassing even high-tax Denmark.

Griveaux later told a weekly news conference that Macron had called on all political parties, trade unions and business leaders to press the need for calm.

Student protests and planned trade union strikes in the energy and port sectors next week underscored the risk of contagion.

A Macron aide denied that any eventual revision of the wealth tax would represent a major climb-down by Macron, a pro-business former investment banker, adding that the president remained committed to his reform drive.

Griveaux defended Macron’s decision last year to narrow the wealth tax – known in France as “ISF” – to a tax on real estate assets, rather than all of an individual’s worldwide assets, from jewelry to yachts to investments, over the value of 1.3 million euros ($1.5 million).

Those changes earned Macron the label “president of the rich” among the hard-pressed middle-class voters and blue-collar workers who criticize the president for pursuing policies that favor the wealthy and do nothing to help the poor.

Griveaux said the wealth tax reform had not been “a gift to the rich” and was aimed at encouraging wealthy individuals to invest more in France.

“This money was to be invested in our SMEs for them to develop, innovate and hire. If that is not the case … then we can reopen it for discussion.”

The “yellow vest” movement – so-called because of the high-vis jackets worn by protesters – began with the aim of highlighting the squeeze on household budgets caused by fuel taxes but morphed into a broader, sometimes-violent rebellion against 40-year-old Macron.

Prime Minister Edouard Philippe said the six-month suspension to the carbon tax would be used to examine other measures to bolster household spending power.

It marked the first major U-turn by Macron in his 18-months in office, at a time polls show that barely one in five French people think he is doing a good job.

U.S. President Donald Trump appeared to mock Macron over the policy shift, which could make it harder for France to meet its CO2 emissions reduction target, a core element of the Paris climate agreement of 2015.

“I am glad that my friend @EmmanuelMacron and the protestors in Paris have agreed with the conclusion I reached two years ago,” Trump tweeted late on Tuesday, as U.N. climate talks take place in Poland.

“The Paris Agreement is fatally flawed because it raises the price of energy for responsible countries while whitewashing some of the worst polluters.”

Adding to Macron’s difficulties, college students are agitating and the hardline CGT trade union on Wednesday called for strikes in the energy industry and at ports on Dec. 13.

“We too want a freeze on the planned closures of coal plants,” the CGT union said in a statement.

Meanwhile, Total said a rising number of its filling stations were running dry as a result of “yellow vest” roadblocks.