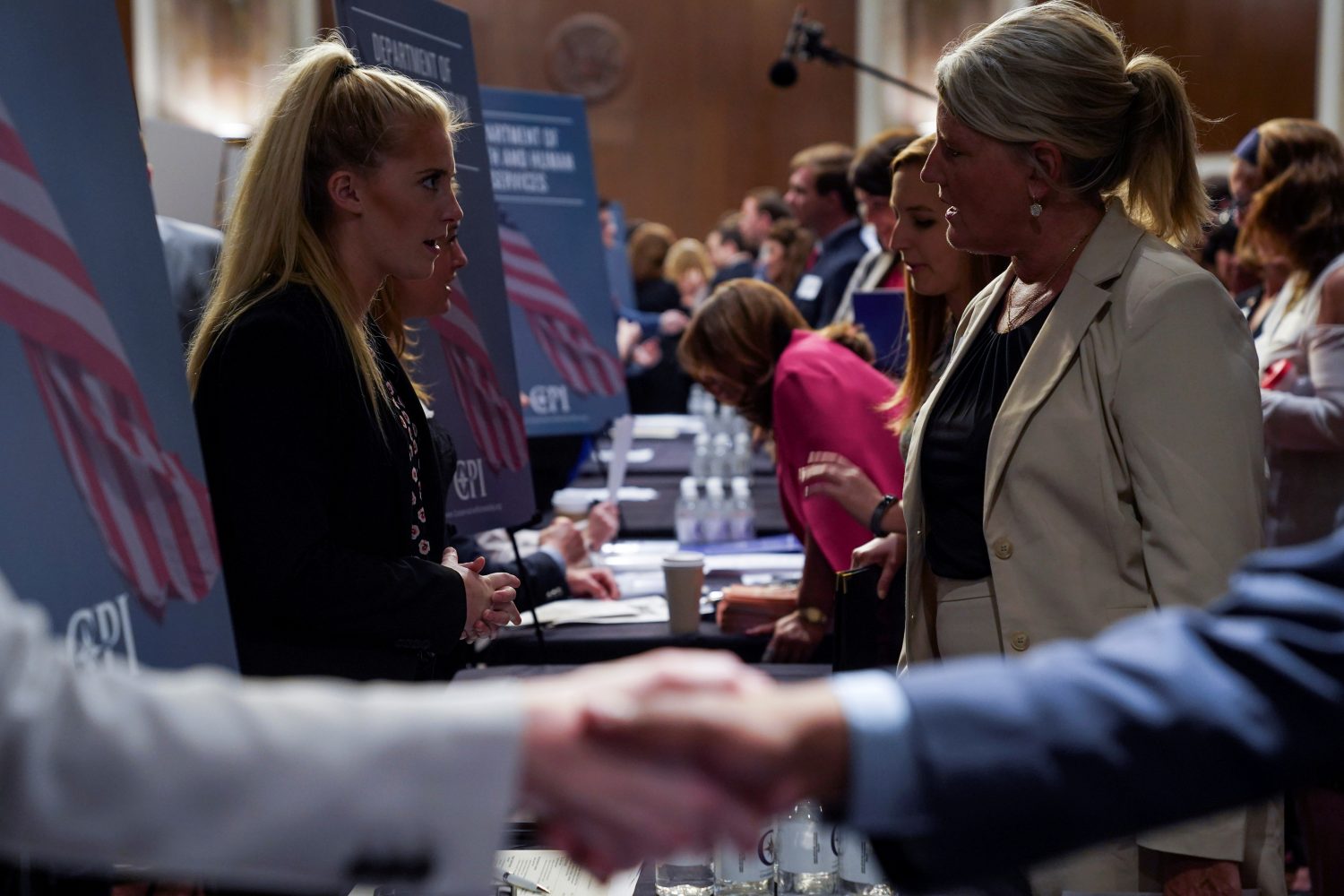 Other data on Thursday showed U.S.-based companies announced fewer layoffs in March, but job cuts for the first quarter were the highest since 2015. The economy is losing momentum as the stimulus from a $1.5 trillion tax cut package fades

Initial claims for state unemployment benefits declined 10,000 to a seasonally adjusted 202,000 for the week ended March 30, the lowest level since early December 1969, the Labor Department said. Data for the prior week was revised to show 1,000 more applications received than previously reported.

Economists polled by Reuters had forecast claims rising to 216,000 in the latest week. The Labor Department said only claims for California were estimated.

The claims data has shown no significant pickup in layoffs and there have been reports of companies reluctant to let go of workers amid a growing shortage of skilled labor. The scarcity of workers contributed to a recent slowdown in hiring.

Job growth has slowed from last year’s roughly 225,000 monthly average pace. The pace of increase, however, remains more than sufficient to keep up with growth in the working age population, holding down the unemployment rate.

U.S. Treasuries prices pared gains after the data, while the dollar was little changed against a basket of currencies.

The four-week moving average of initial claims, considered a better measure of labor market trends as it irons out week-to-week volatility, fell 4,000 to 213,500 last week, the lowest level since early October 2018.

The claims data has no bearing on March’s employment report, which is scheduled for release on Friday. According to a Reuters survey of economists, nonfarm payrolls likely increased by 180,000 jobs last month after a meager 20,000 in February, which was seen as pay-back after robust gains in the prior two months.

The unemployment rate is forecast unchanged at 3.8 percent.

However, layoffs in the first quarter jumped 10.3 percent to 190,410 from the last three months of 2018. That was the highest since the third quarter of 2015 and was partly blamed on “economic uncertainty and fears of an upcoming downturn.” 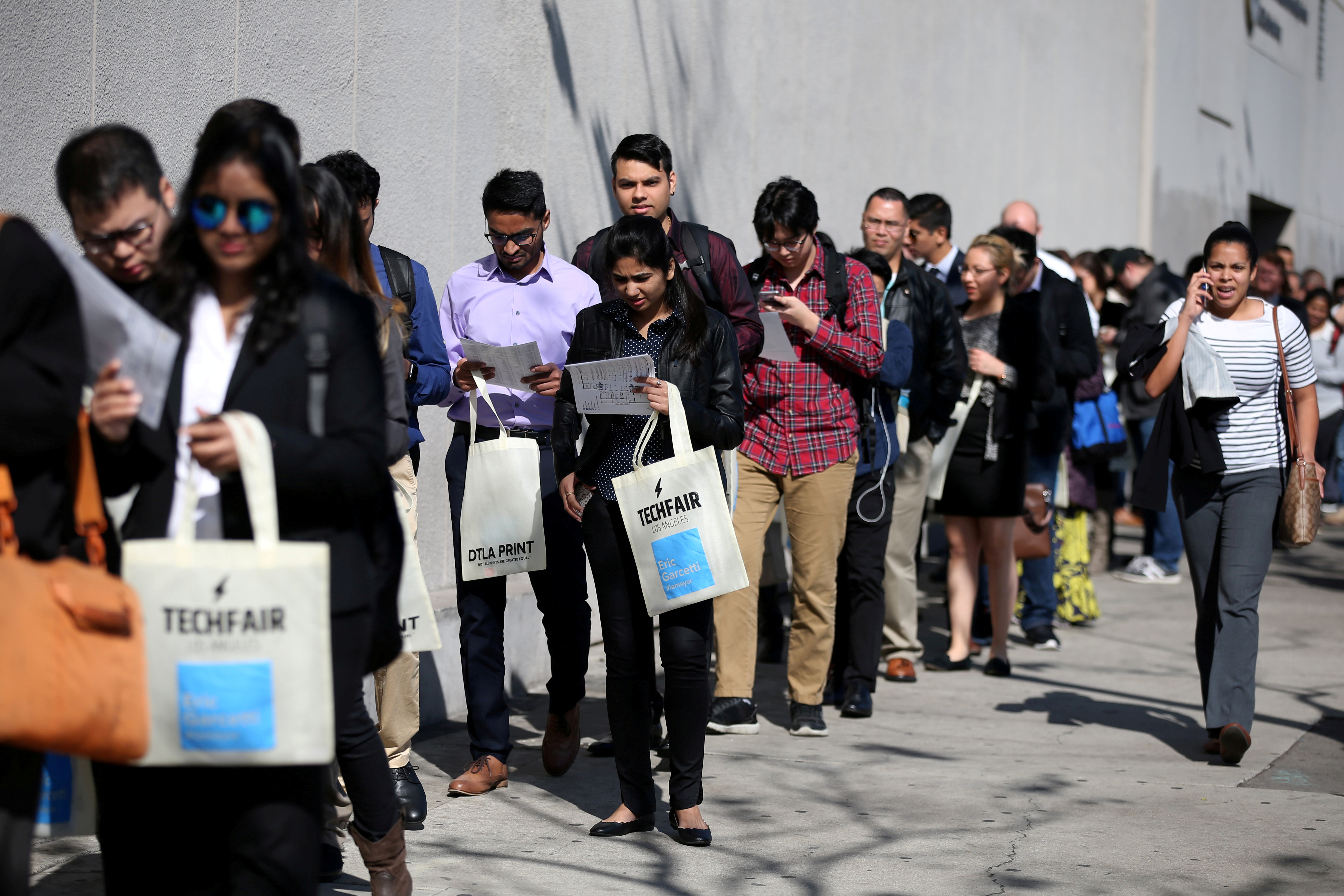 Other data on Thursday showed factory activity in the mid-Atlantic region rebounded in January from near a 2-1/2-year low, driven by a surge in new orders, which could allay concerns that manufacturing production was slowing sharply.

While the data so far suggest the economy is in relatively good shape, there are concerns an ongoing partial shutdown of the federal government could erode both business and consumer confidence, leading to cuts in spending.

Initial claims for state unemployment benefits decreased 3,000 to a seasonally adjusted 213,000 for the week ended Jan. 12, the Labor Department said on Thursday. Economists polled by Reuters had forecast claims would rise to 220,000 last week.

The dollar gained against a basket of currencies. U.S. Treasury yields largely rose while stocks on Wall Street were mixed.

The claims data covered the survey period for the nonfarm payrolls portion of January’s employment report.

Claims fell 4,000 between the December and January survey periods. While that would suggest little change in labor market conditions after the economy created 312,000 jobs in December, the longest government shutdown in U.S. history raises the risk of a drop in payrolls.

Some 800,000 government workers missed their first paycheck last Friday because of the partial shutdown, which started on Dec. 22 as President Donald Trump demanded that Congress give him $5.7 billion this year to help build a wall on the country’s border with Mexico.

The pay period for most federal employees that includes the week of Jan. 12 runs from Jan. 6 to Jan. 19. About 380,000 workers have been furloughed, while the rest are working without pay. Furloughed workers will probably be counted as unemployed.

Private contractors working for many government agencies are also without pay. But Trump has signed legislation for all employees to be paid their salaries retroactively when the shutdown ends. Some economists say that could result in the shutdown having a small impact on January payrolls.

The Trump administration has been recalling some employees to work without pay in an effort to minimize the fallout from the shutdown. Publication of economic data compiled by the Commerce Department’s Bureau of Economic Analysis and Census Bureau has been suspended during the shutdown.

That includes December’s housing starts and building permits report, which was scheduled for release on Thursday. November’s construction, factory orders and trade figures have also been delayed, as well as December retail sales and November business inventories data.

The incomplete data is making it hard to get a clear read on the economy, which could complicate policy decisions.

The Federal Reserve said on Wednesday in its Beige Book report, which offers a snapshot of the economy, that eight of the U.S. central bank’s 12 districts reported “modest to moderate growth” in late December and early January.

The Fed noted that while outlooks generally remained positive, “many districts reported that contacts had become less optimistic.”

That was corroborated by a separate report on Thursday from the Philadelphia Fed showing its business conditions index increased to a reading of 17.0 in January from 9.1 in December, which was its lowest level since August 2016.

Despite the modest rebound in manufacturing in the region that covers eastern Pennsylvania, southern New Jersey and Delaware, the level of activity is lower than it was for most of 2017 and 2018.

This fits in with other signs that national factory activity is slowing, having hit a two-year low in December. A report from the New York Fed earlier this week showed a second straight monthly drop in its Empire State manufacturing index in January.

“Conditions have certainly downshifted from earlier in 2018 and compared with 2017,” said Adam Ozimek, a senior economist at Moody’s Analytics in West Chester, Pennsylvania. “This reflects simmering risks that threaten to derail the otherwise strong economy.”