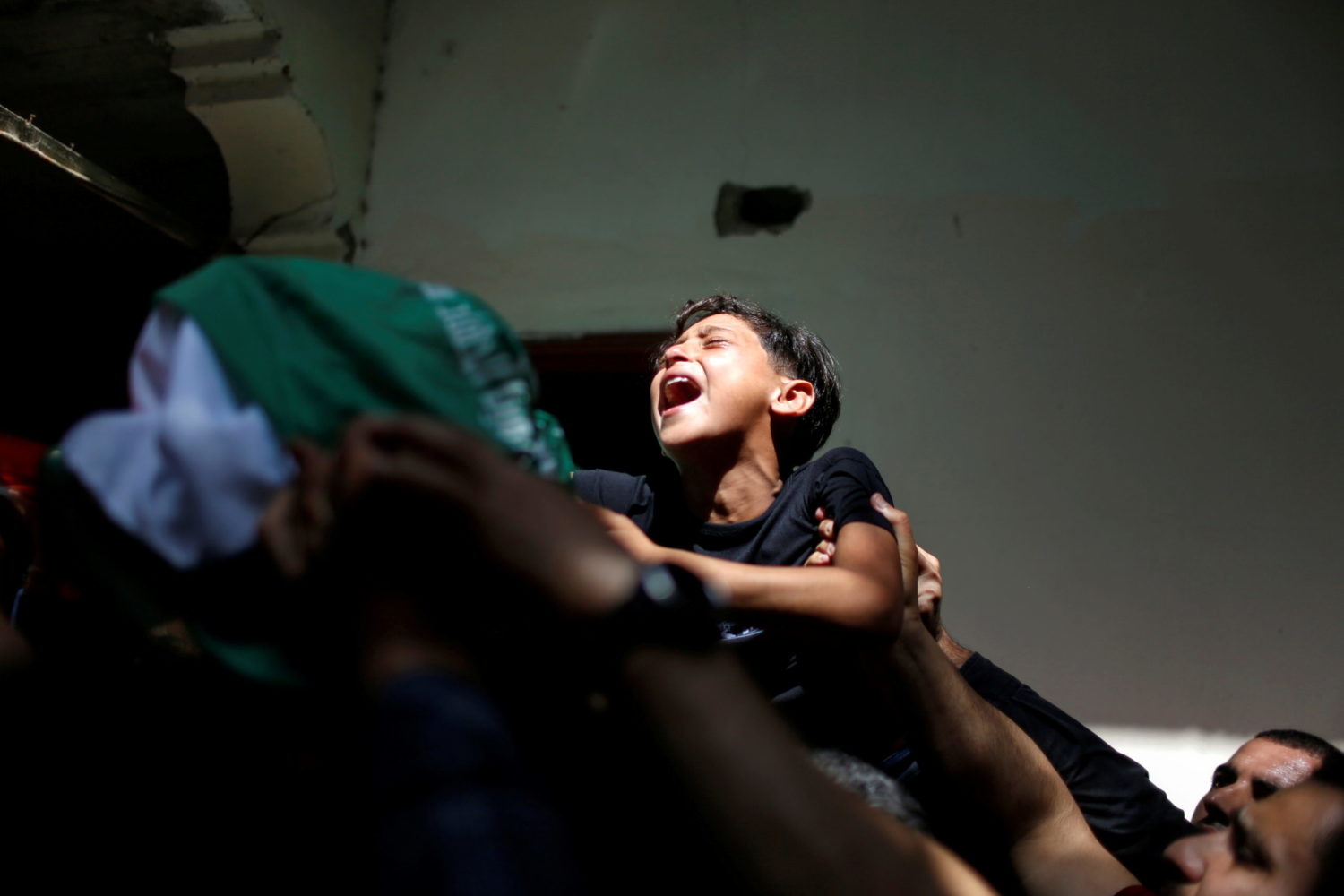 GAZA/JERUSALEM (Reuters) -Hostilities between Israel and Hamas escalated on Tuesday, raising the death toll in two days to 30 Palestinians and three Israelis, with Israel carrying out multiple air strikes in Gaza and the Islamist militant group firing rockets at Tel Aviv.

A 13-story residential Gaza block collapsed after one of several dozen air strikes. Late into the night, Gazans reported their homes shaking and the sky lighting up with near-constant Israeli strikes.

Israelis ran for shelters in communities more than 70 km (45 miles) up the coast amid sounds of explosions as Israeli interceptor missiles streaked into the sky. Israel said hundreds of rockets had been fired by Palestinian militant groups.

For Israel, the militants’ targeting of Tel Aviv, its commercial capital, posed a new challenge in the confrontation with the Islamist Hamas group, regarded as a terrorist organization by Israel and the United States.

The violence followed weeks of tension in Jerusalem during the Muslim fasting month of Ramadan, with clashes between Israeli police and Palestinian protesters in and around Al-Aqsa Mosque, on the compound revered by Jews as Temple Mount and by Muslims as the Noble Sanctuary.

These escalated in recent days ahead of a – now postponed – court hearing in a case that could end with Palestinian families evicted from East Jerusalem homes claimed by Jewish settlers.

There appeared no imminent end to the violence. Israeli Prime Minister Benjamin Netanyahu warned that militants would pay a “very heavy” price for the rockets, which reached the outskirts of Jerusalem on Monday during a holiday in Israel commemorating its capture of East Jerusalem in a 1967 war.

“We are at the height of a weighty campaign,” Netanyahu said in televised remarks alongside his defense minister and military chief.

“Hamas and Islamic Jihad paid … and will pay a very heavy price for their belligerence … their blood is forfeit.”

Hamas – seeking the opportunity to marginalize Palestinian President Mahmoud Abbas and to present itself as the guardians of Palestinians in Jerusalem – said it was up to Israel to make the first move.

The militant group’s leader, Ismail Haniyeh, said in a televised speech that Israel had “ignited fire in Jerusalem and Al-Aqsa and the flames extended to Gaza, therefore, it is responsible for the consequences.”

The White House said on Tuesday that Israel has a legitimate right to defend itself from rocket attacks but applied pressure on Israel over the treatment of Palestinians, saying Jerusalem “must be a place of co-existence.

White House spokeswoman Jen Psaki opened her daily news briefing with a statement about the situation, saying that President Joe Biden’s primary focus was on de-escalation.

The United States was delaying U.N. Security Council efforts to issue a public statement on escalating tensions because it could be harmful to behind-the-scenes efforts to end the violence, according to diplomats and a source familiar with the U.S. strategy.

Speaking on condition of anonymity, the source said Washington is “actively engaged in diplomacy behind the scenes with all parties to achieve a ceasefire” and was concerned that a council statement might be counterproductive at the moment.

Israel said it had sent 80 jets to bomb Gaza, and dispatched infantry and armor to reinforce the tanks already gathered on the border, evoking memories of the last Israeli ground incursion into Gaza to stop rocket attacks, in 2014.

More than 2,100 Gazans were killed in the seven-week war that followed, according to the Gaza health ministry, along with 73 Israelis, and thousands of homes in Gaza were razed.

Video footage on Tuesday showed three plumes of thick, black smoke rising from the Gaza block as it toppled over. Electricity in the surrounding area went out.

Residents of the block and the surrounding area had been warned to evacuate the area around an hour before the air strike, according to witnesses, and there were no reports of casualties two hours after it collapsed.

People in other blocks reported that they received warnings from Israel to evacuate ahead of a possible attack.

In Tel Aviv, air raid sirens and explosions were heard around the city. Pedestrians ran for shelter, and diners streamed out of restaurants while others flattened themselves on pavements as the sirens sounded.

The Israel Airports Authority said it had halted take-offs at Tel Aviv airport “to allow defense of the nation’s skies,” but later resumed them.

The International Committee of the Red Cross urged all sides to step back, and reminded them of the requirement in international law to try to avoid civilian casualties.

“The recent rockets in Israel and air strikes in Gaza represent a dangerous escalation of the tensions and violence witnessed over the past days in Jerusalem, including its Old City,” Fabrizio Carboni, ICRC regional director for the Middle East, said in a statement.

Israel’s Magen David Adom ambulance service said a 50-year-old woman was killed when a rocket hit a building in the Tel Aviv suburb of Rishon Lezion, and that two women had been killed in rocket strikes on the southern city of Ashkelon.

But the Israeli military said many of the rockets fired from Gaza had fallen short and wounded Palestinians, and that Israel’s Iron Dome air defenses had intercepted the bulk of those that made it across the border.

Violence has also ticked up in the occupied West Bank.