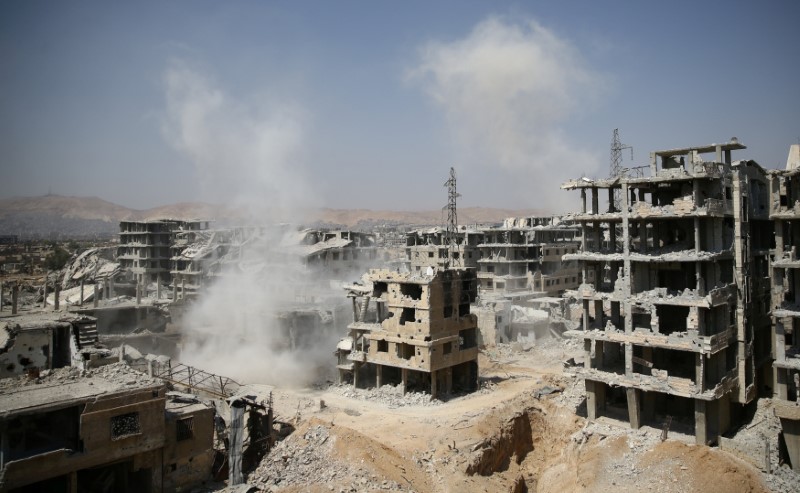 GENEVA (Reuters) – A convoy from the United Nations and Syrian Arab Red Crescent entered towns in the besieged Damascus suburb of eastern Ghouta on Monday, bringing aid to 40,000 people for the first time since June 2016, the United Nations said.

A tightening siege by government forces has pushed people to the verge of famine in the eastern suburbs, residents and aid workers said last week, bringing desperation to the only major rebel enclave near the Syrian capital.

The U.N. Office for the Coordination of Humanitarian Affairs (OCHA) said on Twitter they had entered the towns of Kafra Batna and Saqba.

The Syrian Arab Red Crescent said in a separate tweet that the inter-agency convoy had 49 trucks.

They carried food, nutrition and health items for 40,000 people in need, OCHA spokesman Jens Laerke said. “The last time we reached these two locations were in June 2016,” he said.

A health worker in Saqba who was present when the convoy started to offload said that nine trucks of foodstuffs, including milk and peanut butter, and four trucks of medicines had arrived so far.

Technical specialists were on board to assess needs in the towns in order to plan a further humanitarian response, he said.

At least 1,200 children in eastern Ghouta suffer from malnutrition, with 1,500 others at risk, a spokeswoman for the U.N. children’s agency UNICEF said last week.

Food, fuel and medicine once travelled across frontlines into the suburbs through a network of underground tunnels. But early this year, an army offensive nearby cut smuggling routes that provided a lifeline for around 300,000 people in the enclave east of the capital. 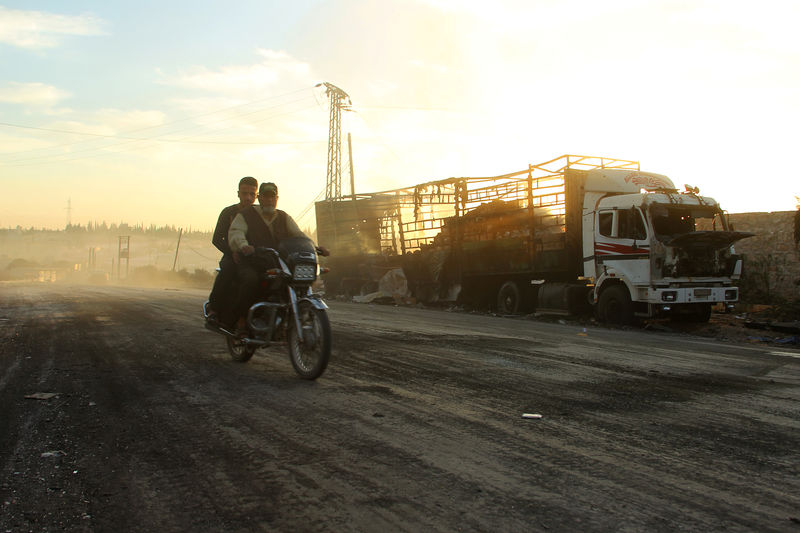 GENEVA (Reuters) – Analysis of satellite imagery of a deadly attack on an aid convoy in Syria last month showed that it was an air strike, a U.N. expert said on Wednesday.

Some 20 people were killed in the attack on the U.N. and Syrian Arab Red Crescent convoy at Urem Al-Kubra near the northern city of Aleppo that also destroyed 18 of 31 trucks, a warehouse and clinic.

The United States blamed two Russian warplanes which it said were in the skies above the area at the time of the incident. Moscow denies this and says the convoy caught fire.

“We had an image of that and could clearly see the damage there. With our analysis we determined it was an air strike and I think multiple other sources have said that as well,” Lars Bromley, research adviser at UNOSAT, told a news briefing.

“For air strikes, what you are usually looking out for is the size of the crater that is visible and the type of crater,” he said. A giant crater was caused “almost certainly (by) air dropped munitions” as opposed to artillery or mortars, he said.

The United Nations has referred officially only to an “attack”, which led to a brief suspension of its convoys in Syria. The International Federation of Red Cross and Red Crescent Societies initially referred to “air strikes” in a statement.

U.N. Secretary-General Ban Ki-moon said on Friday he would establish an internal U.N. board of inquiry to investigate the attack and urged all parties to fully cooperate.

UNOSAT (U.N. Operational Satellite Applications Programme), which reviews only commercially available satellite images, has not been asked to share its analysis with the U.N. investigators, but is prepared to do so, UNOSAT manager Einar Bjorgo said. “Our images are from time to time used in order to brief Security Council members,” he said.

Bjorgo, speaking generally, said: “We are neutral. We don’t have a political agenda, we simply state the facts.”

UNOSAT has mapped Syria’s conflict since it began in 2011, using satellite imagery to assess population movements and damage to civilian infrastructure. This enables U.N. agencies trying to deliver food and medical assistance to besieged areas to view roadblocks and checkpoints in real time.

Bromley, referring to rebel-held eastern Aleppo that has been pummeled by Syrian and Russian aircraft for the last 10 days, said:

“What you see is (that) formerly blasted and blown up areas are experiencing a great deal of additional damage. So it’s actually hard to do the analysis because to a certain extent you are looking at rubble being pushed around. But it’s certainly highly visible.”