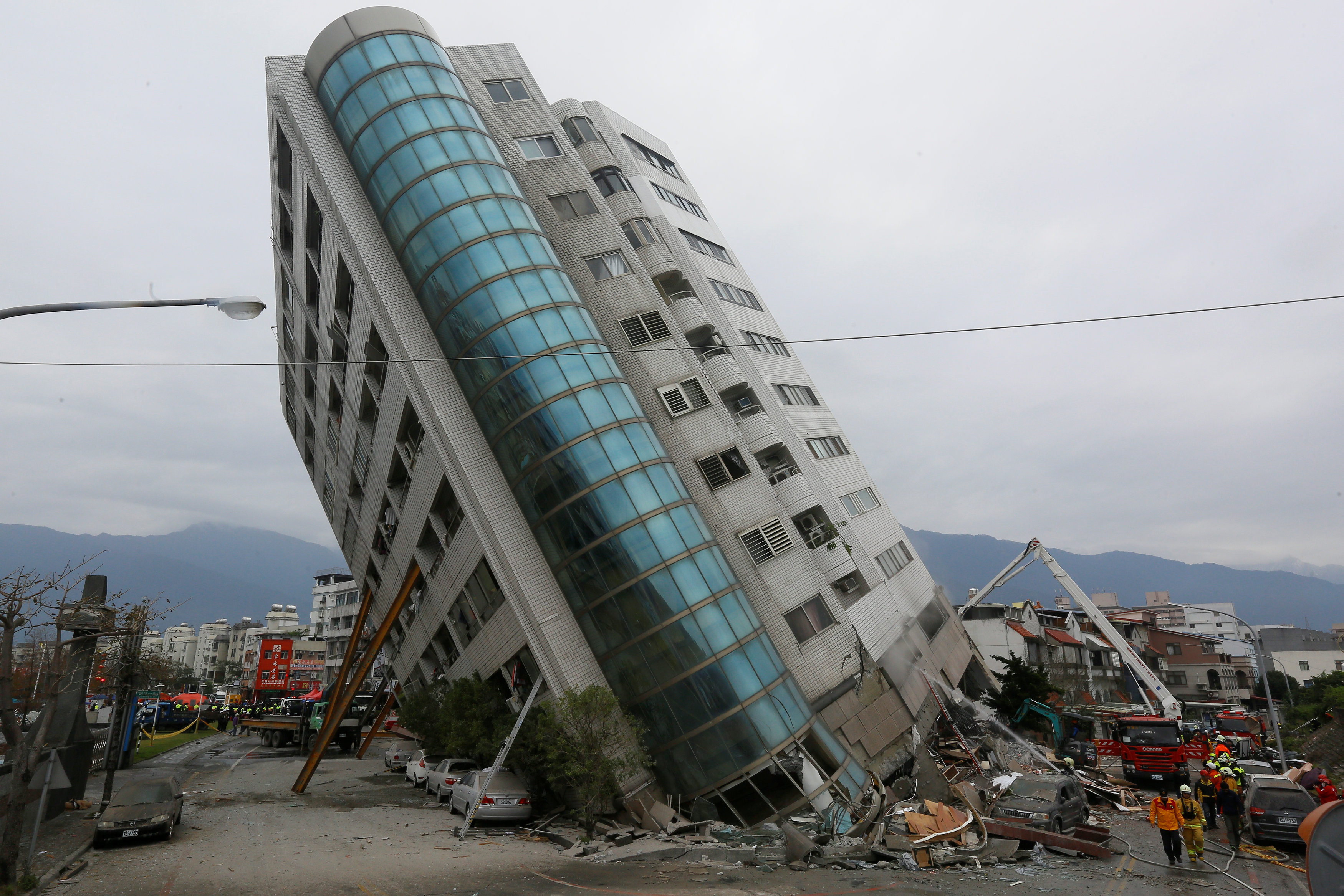 By Fabian Hamacher and Tyrone Siu

HUALIEN, Taiwan (Reuters) – Rescuers combed through the rubble of collapsed buildings on Wednesday, in a search for 67 people missing after a strong earthquake which killed at least seven near Taiwan’s popular tourist city of Hualien.

The magnitude 6.4 quake, which hit near the coastal city just before midnight (1600 GMT) on Tuesday, injured 260 people and caused four buildings to collapse, officials said.

Hualien Mayor Fu Kun-chi said the number of people missing was now close to 60, although an exact figure was not provided. As many as 150 were initially feared missing.

Many of the missing were believed to be still trapped inside buildings, some of which tilted precariously, after the quake struck about 22 km (14 miles) northeast of Hualien on Taiwan’s east coast.

At the city’s Marshal Hotel, rescuers trying to free two trapped Taiwanese pulled one out alive, but the other person was declared dead, the government said.

Mainland Chinese, Czech, Japanese, Singaporean and South Korean nationals were among the injured.

“This is the worst earthquake in the history of Hualien, or at least over the past 40 years that I’ve been alive,” said volunteer Yang Hsi Hua.

“We’ve never had anything like this, we’ve never had a building topple over. Also, it was constantly shaking, so everyone was really scared, we ran to empty open spaces to avoid it.” 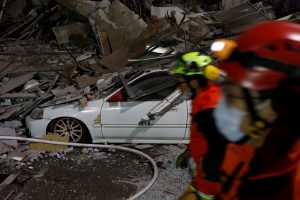 Aftershocks with a magnitude of at least 5.0 could rock the island in the next two weeks, the government said. Smaller tremors rattled nervous residents throughout the day.

Emergency workers surrounded a badly damaged 12-storey residential building, a major focus of the rescue effort. Windows had collapsed and the building was wedged into the ground at a roughly 40-degree angle.

Rescuers worked their way around and through the building while residents looked on from behind cordoned-off roads. Others spoke of the panic when the earthquake struck.

“We were still open when it happened,” said Lin Ching-wen, who operates a restaurant near a damaged military hospital.

“I grabbed my wife and children and we ran out and tried to rescue people,” he said.

A Reuters video showed large cracks in the road, while police and emergency services tried to help anxious people roaming the streets. A car sat submerged in rubble as rescue workers combed through the ruins of a nearby building.

President Tsai Ing-wen went to the scene of the quake early on Wednesday to help direct rescue operations.

“The president has asked the cabinet and related ministries to immediately launch the ‘disaster mechanism’ and to work at the fastest rate on disaster relief work,” Tsai’s office said in a statement. 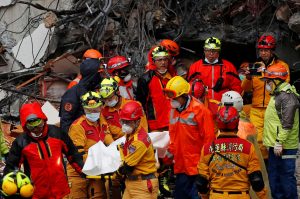 A body of employee of collapsed Marshal Hotel is carried by a rescue personnel after an earthquake hit Hualien, Taiwan February 7, 2018. REUTERS/Tyrone Siu

Taiwan, a self-ruled island that China considers part of its territory, lies near the junction of two tectonic plates and is prone to earthquakes. An earthquake with a magnitude of 6.1 struck nearby on Sunday.

More than 100 people were killed in a quake in southern Taiwan in 2016, and some Taiwanese remain scarred by a 7.6 magnitude quake that was felt across the island and killed more than 2,000 people in 1999.