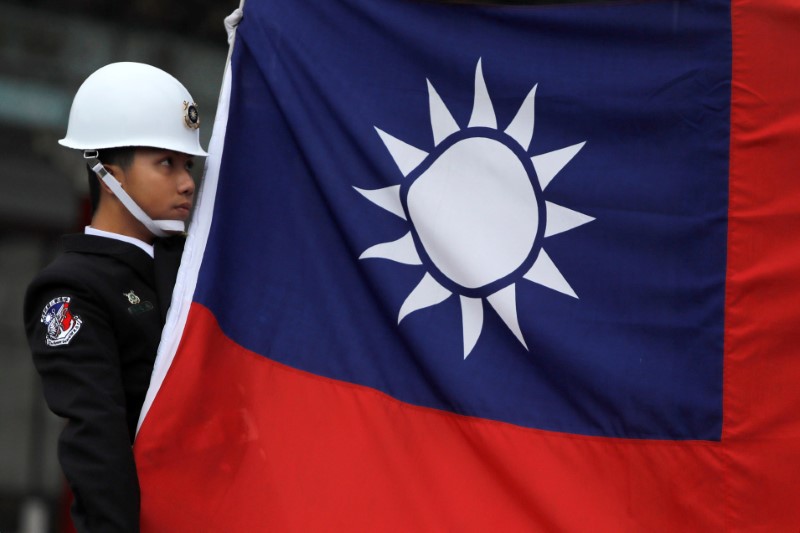 While there was no immediate comment from Beijing, the news comes after the Group of Seven leaders issued a joint statement on Sunday scolding China for a series of issues and underscored the importance of peace and stability across the Taiwan Strait, comments China condemned as “slander.”

Chinese-claimed Taiwan has complained over the last few months of repeated missions by China’s air force near the self-ruled island, concentrated in the southwestern part of its air defense zone near the Taiwan-controlled Pratas Islands.

It was the largest daily incursion since the ministry began regularly reporting Chinese Air Force activities in Taiwan’s ADIZ last year, breaking the previous record of 25 aircraft reported on April 12.

The ministry added that Taiwanese combat aircraft were dispatched to intercept and warn away the Chinese aircraft, while missile systems were also deployed to monitor them.

Not only did the Chinese aircraft fly in an area close to the Pratas Islands, but the bombers and some of the fighters flew around the southern part of Taiwan close to the bottom tip of the island, according to a map the ministry provided.

China’s Defense Ministry did not respond to a request for comment.

China has in the past described such missions as necessary to protect the country’s sovereignty and deal with “collusion” between Taipei and Washington.

The United States, which like most countries has no formal diplomatic ties with Taiwan, has watched with alarm the stepped up tensions with Beijing.

China describes Taiwan as its most sensitive territorial issue and a red line the United States should not cross. It has never renounced the possible use of force to ensure eventual unification. 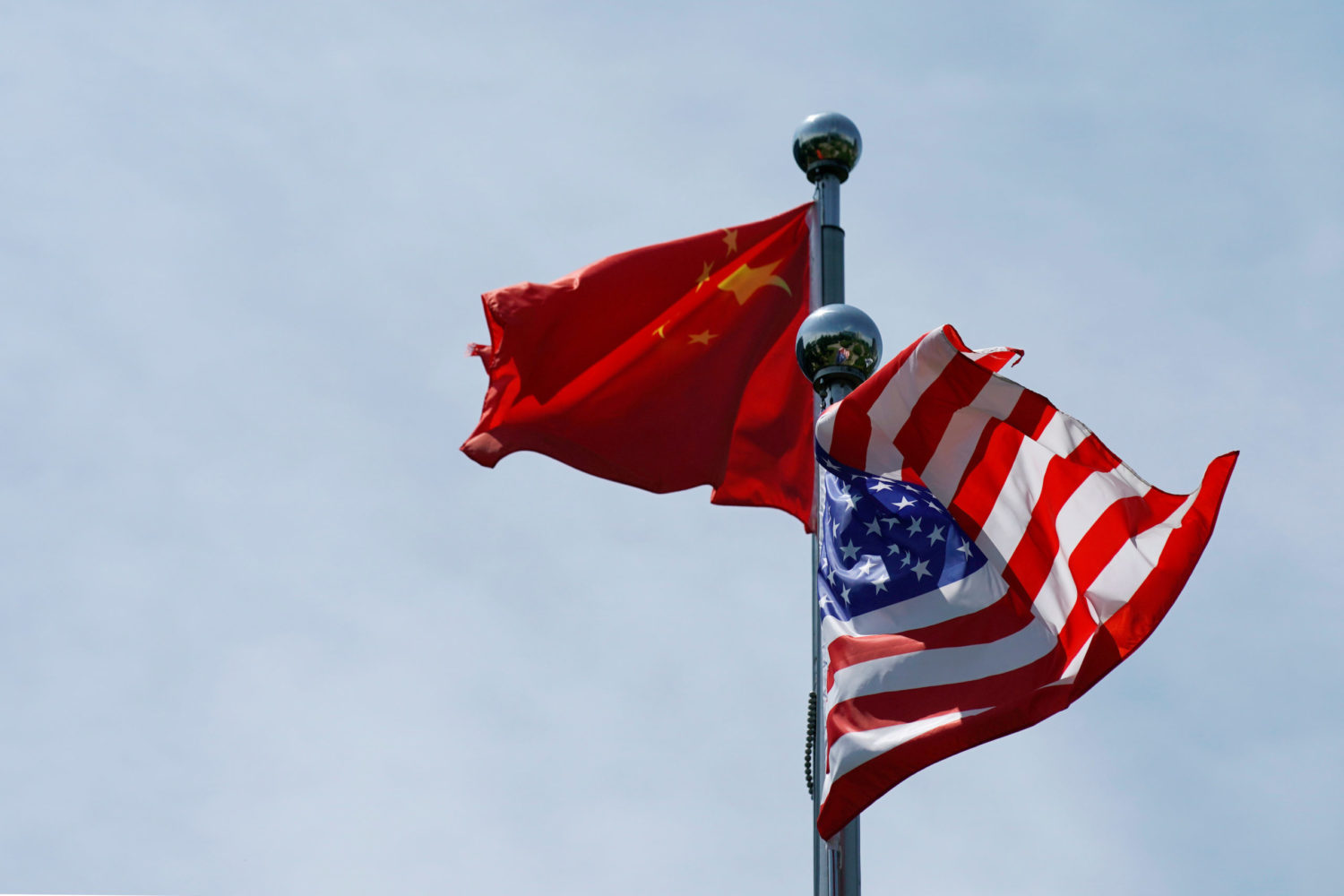 BEIJING (Reuters) – China’s military said on Wednesday the latest U.S. navy sailing near Chinese-claimed Taiwan was “extremely dangerous” and stirring up such trouble was in neither country’s interests.

The U.S. guided-missile destroyer USS Mustin sailed through the narrow and sensitive Taiwan Strait on Tuesday, the U.S. navy said, in what have become relatively routine trips in recent months, though they always anger China.

The Eastern Theater Command of China’s People’s Liberation Army said its air and naval forces followed and monitored the U.S. ship throughout its voyage.

“Any words or deeds that … cause trouble in the Taiwan Strait are not in line with the fundamental interests of China and the United States, harm the well-being of compatriots on both sides of the strait, pose real threats to peace and stability in the region and are extremely dangerous”, it said.

Chinese forces will remain on high alert at all times to safeguard China’s sovereignty and territorial integrity, it added.

Taiwan’s defense ministry said the U.S. ship was on an “ordinary mission” and passed through the Taiwan Strait in a southerly direction.

The sailing comes a week after U.S. Health Secretary Alex Azar visited Taiwan, the highest level U.S. official to travel to the island since Washington broke off diplomatic ties with Taipei in favor of Beijing in 1979.

China considers Taiwan a purely domestic matter, and routinely calls it the most sensitive and important issue in its relations with the United States. 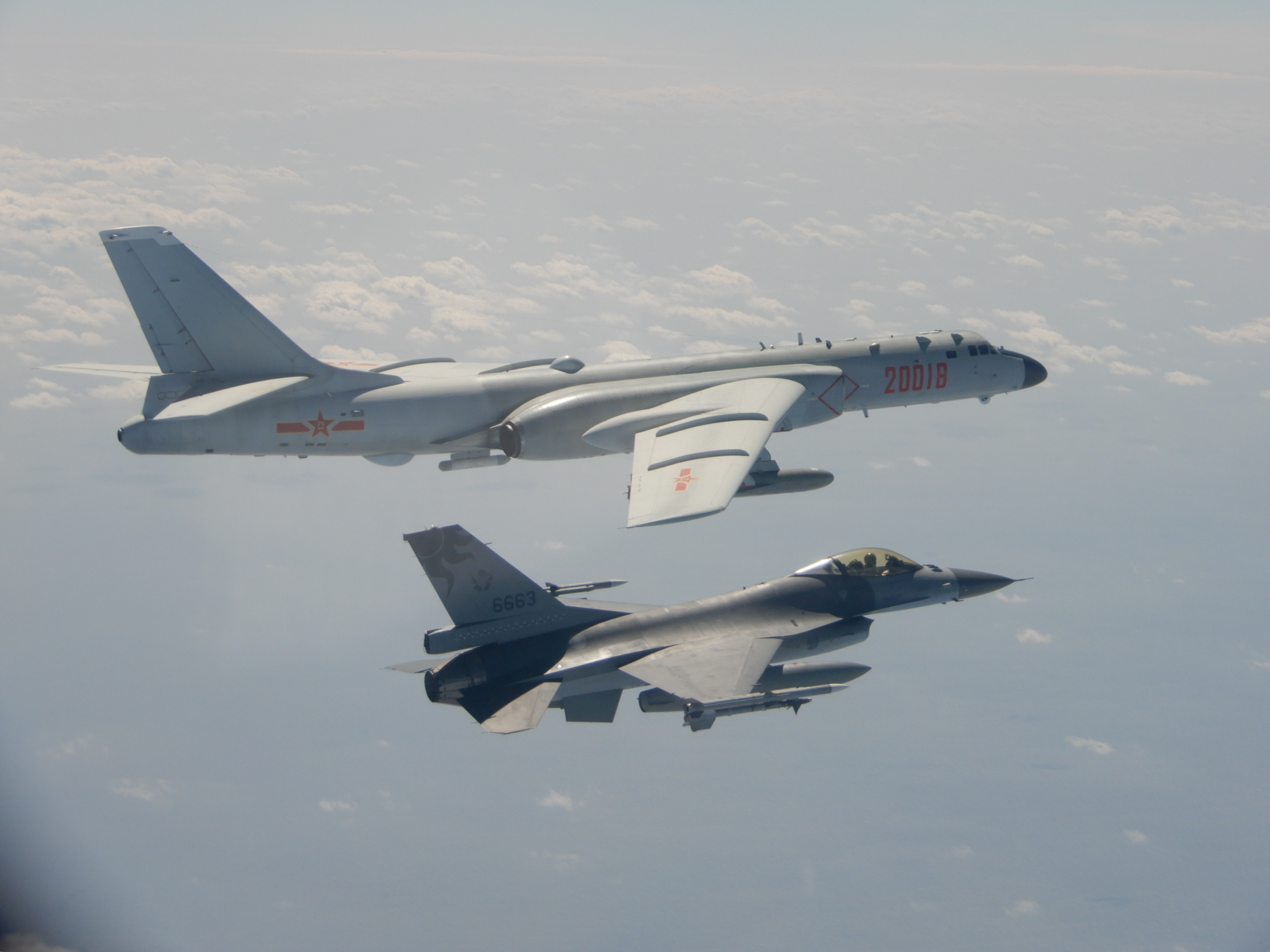 By Ben Blanchard and Yimou Lee

TAIPEI (Reuters) – Taiwan’s air force scrambled for a second day in a row on Monday to intercept Chinese jets that approached the island claimed by Beijing as its own, as tensions between the two took on a potentially dangerous military dimension.

Taiwan’s Defence Ministry said Chinese jets, accompanying H-6 bombers, briefly crossed an unofficial mid-line in the Taiwan Strait that separates the two, prompting its air force to rush to intercept and give verbal warnings to leave.

The Chinese aircraft then withdrew to the western side of the line, the ministry added, without identifying the jets.

The H-6s were on a training mission in the Pacific having passed through the Bashi Channel that separates Taiwan from the Philippines, the ministry added and shared a picture of a Taiwan F-16 accompanying one of the H-6 bombers.

Tsai says Taiwan is an independent country called the Republic of China, its official name.

On Sunday too, Chinese jets, including J-11 fighters, flew into the Bashi Channel then out into the Pacific before heading back to base via the Miyako Strait, located between Japan’s islands of Miyako and Okinawa, to the northeast of Taiwan.

There was no immediate comment from China on Monday’s incident. This is only the second time since 2016 that Taiwan has said that Chinese jets had crossed the strait’s median line. Their military aircraft tend to keep to their own sides.

The DPP have been “adopting a stance that increases cross-strait confrontation, intensifying new moves for Taiwan-U.S. collusion, using the opportunity to seek independence and openly carrying out dangerous provocations”, it added.

The latest fly-bys came as Taiwan’s vice-president elect, William Lai, was returning from a visit to Washington, where he attended the high-profile National Prayer Breakfast, at which U.S. President Donald Trump spoke. China denounced Lai’s trip.

Washington is Taipei’s most important backer and arms supplier, despite the absence of official diplomatic ties.

China says Taiwan is the most sensitive issue in its relations with the United States.

Relations between the Taipei and Beijing have further soured recently over the coronavirus outbreak, with Taiwan accusing China of preventing the island from accessing full information from the World Health Organization or attending its meetings.

China should focus on controlling the spread of the virus, rather than threatening Taiwan, Tsai said on Monday.

“In recent years, Communist aircraft and warships have frequented the vicinity of the Taiwan Strait and attempted to use arms to force unification,” it said.

“Various provocative acts have seriously damaged the status quo of the Taiwan Strait and have increased regional tensions.” 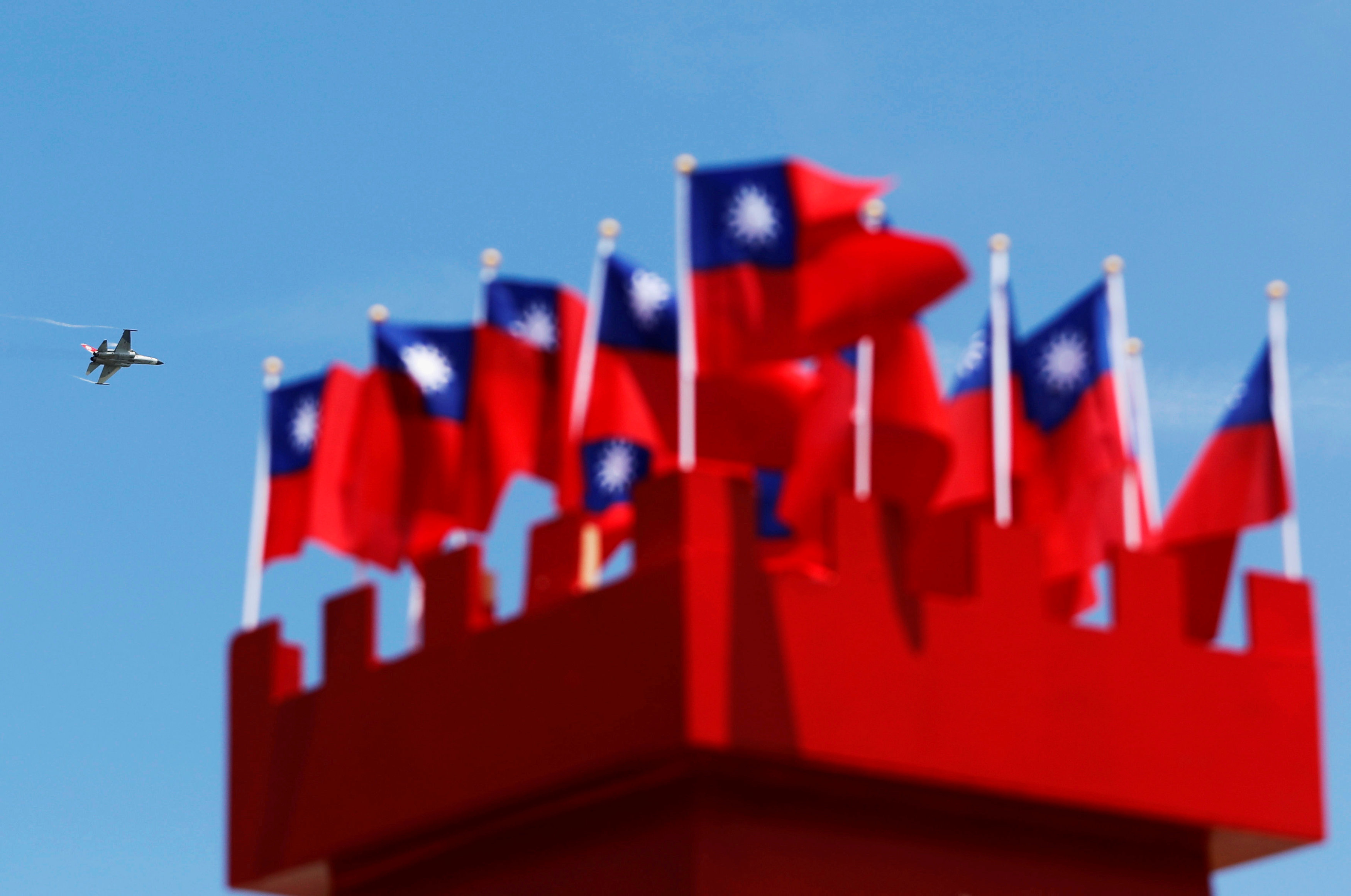 TAIPEI/HONG KONG (Reuters) – Taiwan’s ruling party plans to use a long-term increase in defense spending to pursue advanced weapons systems, government officials say, in what is widely seen as growing determination to forge a stronger deterrent against a Chinese attack.

Tsai and her team have met repeatedly with military leaders in a push for new investment in training and equipment, one of the officials said. Immediate priorities include new missiles, drones and electronic warfare systems, fighter aircraft and ballistic missile defenses, according to a separate statement from the Ministry of National Defence sent to Reuters.

Although some arms would be domestically produced, such as an existing plan to locally build eight submarines, they say a longer-term Taiwanese drive for improved capabilities could mean fresh U.S. deals. Those requests could deepen tensions between Beijing and Washington.

China considers democratic Taiwan to be a wayward province and has never renounced the use of force to bring the island under its control.

The United States, Taiwan’s sole foreign supplier of arms, has for years called on Taipei to address a worsening military imbalance across the Taiwan Strait, which has recently seen heightened tensions amid military assertiveness by China. In the first week of 2018, China sailed an aircraft carrier and other military ships through the strait on a training mission.

“If there are three weapons systems that China’s high command really wants to keep out of Taiwan’s hands, it is submarines, fighter jets and ballistic missile defenses. Taipei is smartly investing in all three,” said Ian Easton, a U.S.-based research fellow at the Project 2049 Institute, which studies Asia security issues.

In October, Tsai signaled that defense spending would increase by at least 2 percent each year, with more possible based on the need for significant purchases.

By 2025, Taiwan’s annual defense spending is projected to increase by at least 20 percent – or NT$62.4 billion ($2.08 billion) – to NT$381.7 billion, the officials said, if the legislature approves the future budgets.

With economic growth “on track” for this year, Taiwan’s defense spending will “likely” exceed the baseline that the president has announced, one of the officials said.

“The Tsai administration is seeking to undo years of defense spending cuts,” the two officials said in a separate written statement to Reuters.

“The additional funds will target enhancements in asymmetrical defense strategies in the short-term, and advanced weapons and equipment either domestically produced or through defense procurements in the long-term,” one of them added.

Taiwan’s Ministry of National Defence confirmed to Reuters that electronic warfare, information security and improved drones were among the priorities for this year, along with existing programs, including upgrades of its Raytheon Co Patriot missile defenses, Lockheed Martin Corp F-16A/B jet fighters and indigenously built training planes.

The ministry also confirmed plans to improve mobile missile launchers, but has yet to detail whether that would mean reviving an earlier ballistic missile program or improving the cruise missiles Taiwan already has. Both are likely to face intense Chinese scrutiny.

The planned increases mark a change in commitment from the previous China-friendly Kuomintang government under President Ma Ying-jeou, under whom defense spending from 2009 to 2016 slid from 3 percent to 2.1 percent of GDP, according to government data.

Regional diplomats are watching developments closely. Although few nations have formal diplomatic or military ties with the island, any boost in Taiwan’s military could complicate China’s strategic domain.

“The military balance is rapidly shifting in China’s favor, but the new Taiwanese government is more prepared to stand up to China’s behavior,” said Singapore-based security analyst Tim Huxley. “I think some countries, particularly Japan, will see that as a net benefit by making life more difficult for China.”

In recent months, China has ramped up its long-range air force drills, particularly around Taiwan. In March, it said its defense spending would increase 7 percent for 2017, or 1.044 trillion yuan ($158.70 billion).

After taking office in 2016, Tsai has promoted Taiwan’s domestic defense industry as one of several pillars under a so-called “5 plus 2” program that seeks to foster important business sectors in Taiwan.

Analysts have said Taiwan would need to improve both asymmetric warfare and high-end capabilities like aircraft and missile defense after years of budgetary neglect.

Asymmetric warfare means using limited resources to inflict unacceptable damage to a more powerful opponent. Taiwan is betting it can make an attack on it too painful for China to consider, according to Collin Koh, a research fellow at Singapore’s S. Rajaratnam School of International Studies.

“The Taiwanese may not be able to overturn the balance of power now, but they can improve their abilities to raise the costs on China,” he said.