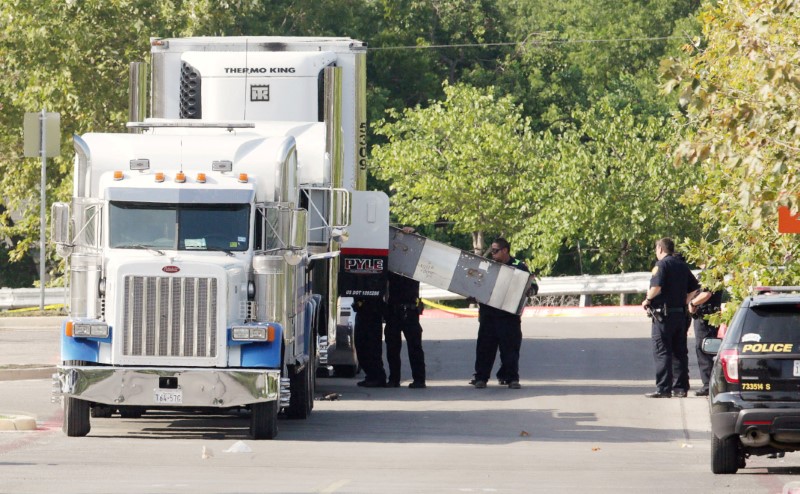 By Jon Herskovitz and Mica Rosenberg

AUSTIN, Texas/NEW YORK (Reuters) – Some of the illegal immigrants who survived a deadly human-smuggling journey into Texas are seeking visas to stay in the United States in exchange for testimony against those responsible for an operation that killed 10 people on a sweltering truck, a lawyer said on Tuesday.

There is precedent for such visas and it could help U.S. authorities bring more people to justice, experts said. So far, only one person has been charged, the driver of the truck who said he was unaware of the human cargo aboard until he took a rest stop in San Antonio. He could face the death penalty if convicted.

The case could also provide a test for the administration of U.S. President Donald Trump, which has promised to crack down on illegal immigration and the criminal syndicates responsible for human trafficking.

Silvia Mintz, an attorney representing the Guatemalan Consulate in Houston, said she has contacted the U.S. Department of Homeland Security to see if it would consider granting “U visas,” available to victims of crimes such as human trafficking who have pertinent information to provide law enforcement.

At least 100 illegal immigrants, mainly from Mexico and Guatemala, were crammed into the back of the truck after crossing the U.S. border.

“If we are able to establish the case, we will go ahead and seek the U visa,” Mintz said in a telephone interview.

Shane Folden, special agent in charge for Homeland Security Investigations in San Antonio, said most of the people found alive at the scene are still in local hospitals. He said it was too early to talk about possible visas.

“There are a number of paths toward immigration relief for situations such as this,” he said in a telephone interview, adding, “we are not at that point yet.”

Of the 39 people found at the scene, 10 have died, 22 were in hospitals and seven have been released and were being questioned, he said.

Most of those aboard the truck fled before authorities could capture them.

U.S. law enforcement has granted temporary visas previously for immigrants who provided testimony in what is considered the worst illegal immigrant-smuggling case in U.S. history, when 19 people died after traveling in an 18-wheeler truck through Victoria, Texas, in 2003.

Temporary visas for about 40 people aboard that truck helped U.S. prosecutors charge more than a dozen people with conspiracy in the case, prosecutors said at the time.

Alonzo Pena, a former deputy director of Immigration and Customs Enforcement, said witnesses in the San Antonio case can be released into the community under strict conditions that could include wearing electronic monitoring devices.

Authorities would likely repatriate the others, said Pena, who runs a San Antonio consulting business, in a telephone interview.

A U-visa is valid for four years and offers a path to apply for permanent residency status. Congress limited the number to 10,000 a year, and the program is heavily oversubscribed.

Those on the truck may also try for a T-visa for victims of human trafficking.

“Our primary goal is to disrupt and dismantle these organizations,” he said.

In a society where Christians are receiving increasing amount of condemnation for publicly standing on their faith, one church is providing compelling evidence for the power of witnessing outside of abortion clinics.

Pastor Jeff Durbin and his witnessing team from Apologia Church in Tempe, Arizona, shared a story at the opening of the 2014 Ignite Conference talking about a couple that they had approached heading into an abortion clinic.  They didn’t yell at the couple but rather calmly presented the gospel and spoke about the value that God places on all lives, including that of the couple’s unborn child.

At the conclusion of the story, a young woman walked on stage with a baby.

It was Tina, the woman who ended up walking away from the abortionist’s table and giving life to the child she was holding in her arms.

“We’re very, very grateful for them saving our baby’s life and opening our eyes,” Tina said.  “They’ve really helped us so much and changed our point of view.  If it wasn’t for them I wouldn’t have my baby.”

Pastor Durbin said Tina and her son were living testimony of the importance of bringing the Gospel into hard places and not being concerned about what the world thinks about it.

“I have an irrefutable argument about bringing the Gospel to hard places despite all the conflict,” Pastor Durbin said, pointing to Tina as she left the stage. 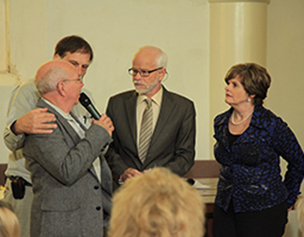 Pastor Jim & Lori Bakker celebrate the Restoration Celebration from the Upper Room at Heritage USA for Day 2 on The Jim Bakker Show. END_OF_DOCUMENT_TOKEN_TO_BE_REPLACED 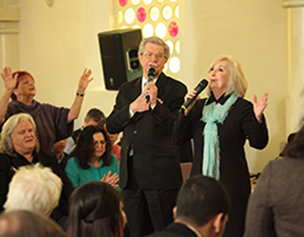 Pastor Jim & Lori Bakker celebrate the Restoration Celebration from the Upper Room at Heritage USA for Day 1 on The Jim Bakker Show. END_OF_DOCUMENT_TOKEN_TO_BE_REPLACED