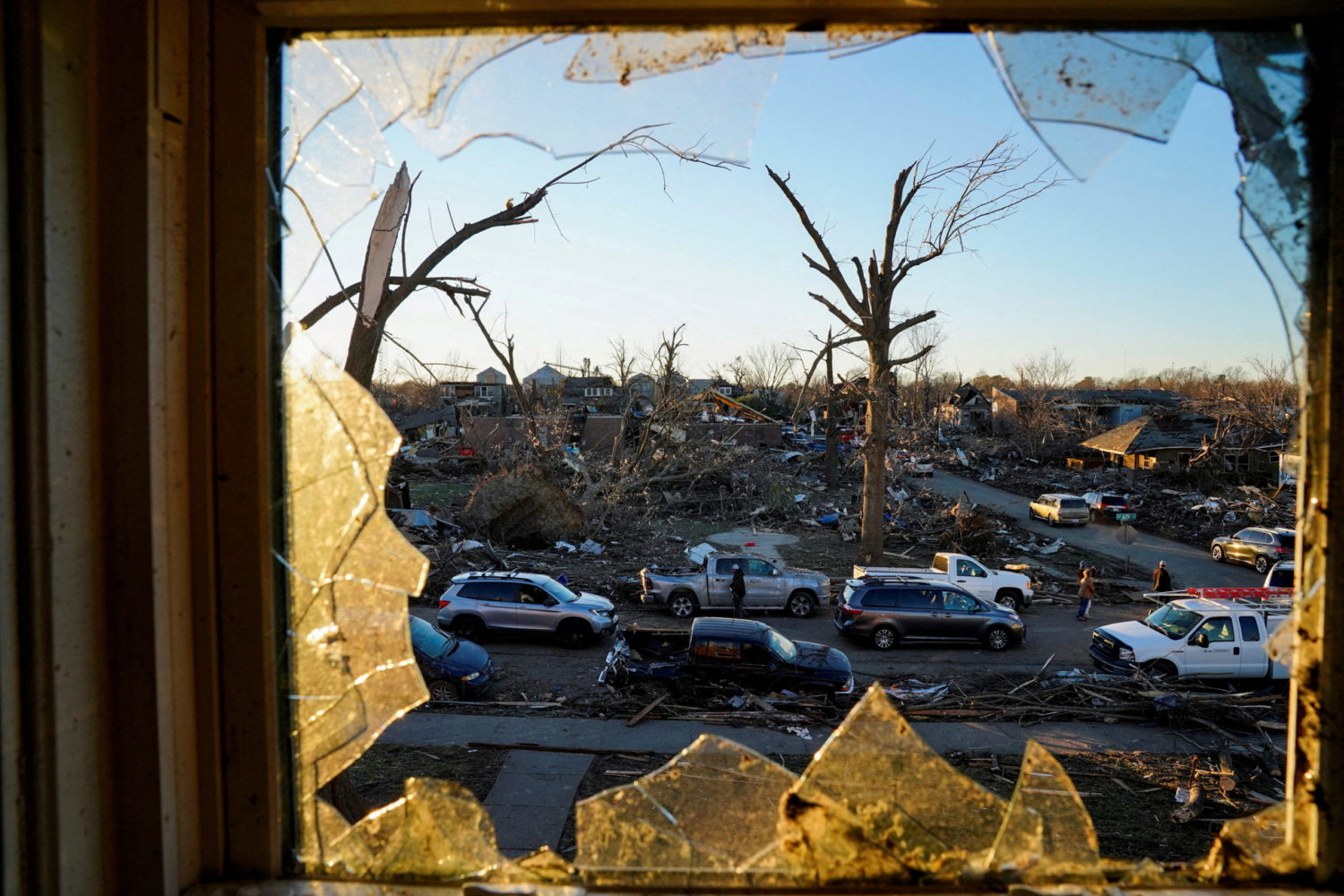 CHICAGO (Reuters) -A Deere & Co dealership and a Pilgrim’s Pride Corp chicken hatchery were destroyed when deadly tornadoes swept through Kentucky on Friday, while silos holding millions of bushels of corn suffered damage, the companies and the state’s agriculture commissioner said on Monday.

“We have a 200-mile swath through Kentucky that has pulled-down grain systems, destroyed chicken hatcheries and of course blown-over barns,” said Ryan Quarles, Kentucky’s agriculture commissioner.

The destruction in the Midwest could further raise already high chicken prices and add to supply-chain headaches that have made it difficult for farmers to replace tractor parts.

Poultry is Kentucky’s top agricultural commodity, and at least a dozen chicken barns collapsed, Quarles said. The state is working with the U.S. Environmental Protection Agency to properly kill and dispose of chickens housed in barns that were destroyed, he said.

President Joe Biden will visit the state on Wednesday to survey the damage.

One Pilgrim’s Pride chicken hatchery was a total loss, and another is expected to be offline until spring after suffering significant damage, the company said in a statement. It added that other company hatcheries are supplying chickens to farmers near Mayfield, a town of 10,000 that suffered some of the worst damage from the tornadoes.

Pilgrim’s, which is mostly owned by Brazilian meatpacker JBS SA, is evaluating damage to a local feed mill, while a production plant is expected to be fully operational on Wednesday, the statement said.

The loss of the hatchery in Mayfield “automatically triggers a multi-month delay in the processing and raising of chickens because the hatchery simply is not there anymore to supply the farmers,” Quarles said.

Mayfield is in Kentucky’s top county for agricultural sales, accounting for 6% of the state’s total farm business, according to U.S. Department of Agriculture data, though the state is not a top grain producer. Kentucky held 1.5% of U.S. corn stocks in December 2020, the USDA said.

Mayfield Grain Company, a crop handler, had roofs ripped off of parts of a storage system that holds 6 million bushels of grain in Mayfield, Quarles said. That’s enough corn to fill two Panamax vessels — each ship the length of two football fields.

Photos on Twitter showed yellow corn visible from the tops of bins that lost their roofs. The company had no immediate comment.

“You have millions of bushels of corn, much of which was just freshly harvested, being exposed to the elements, being damaged,” Quarles said.

“We’re looking for ways to recover spilled grain but also divert the storage and movement of grain to other facilities around the state.”

Quarles said the agriculture department will help farmers find buyers for grain amid reduced demand for feed from livestock and poultry producers who suffered losses.

Hutson Inc, a company that sells Deere equipment, said its flagship store in Mayfield was “destroyed by one of the worst natural disasters to ever hit the state.”

Workers “waded through debris and used what equipment they could salvage to assist with rescue efforts at a candle plant located next to us that had mass casualties,” Chief Executive Josh Waggener said in a statement online.

Deere said it is in touch with Waggener and working with Hutson to provide financial assistance to the community. 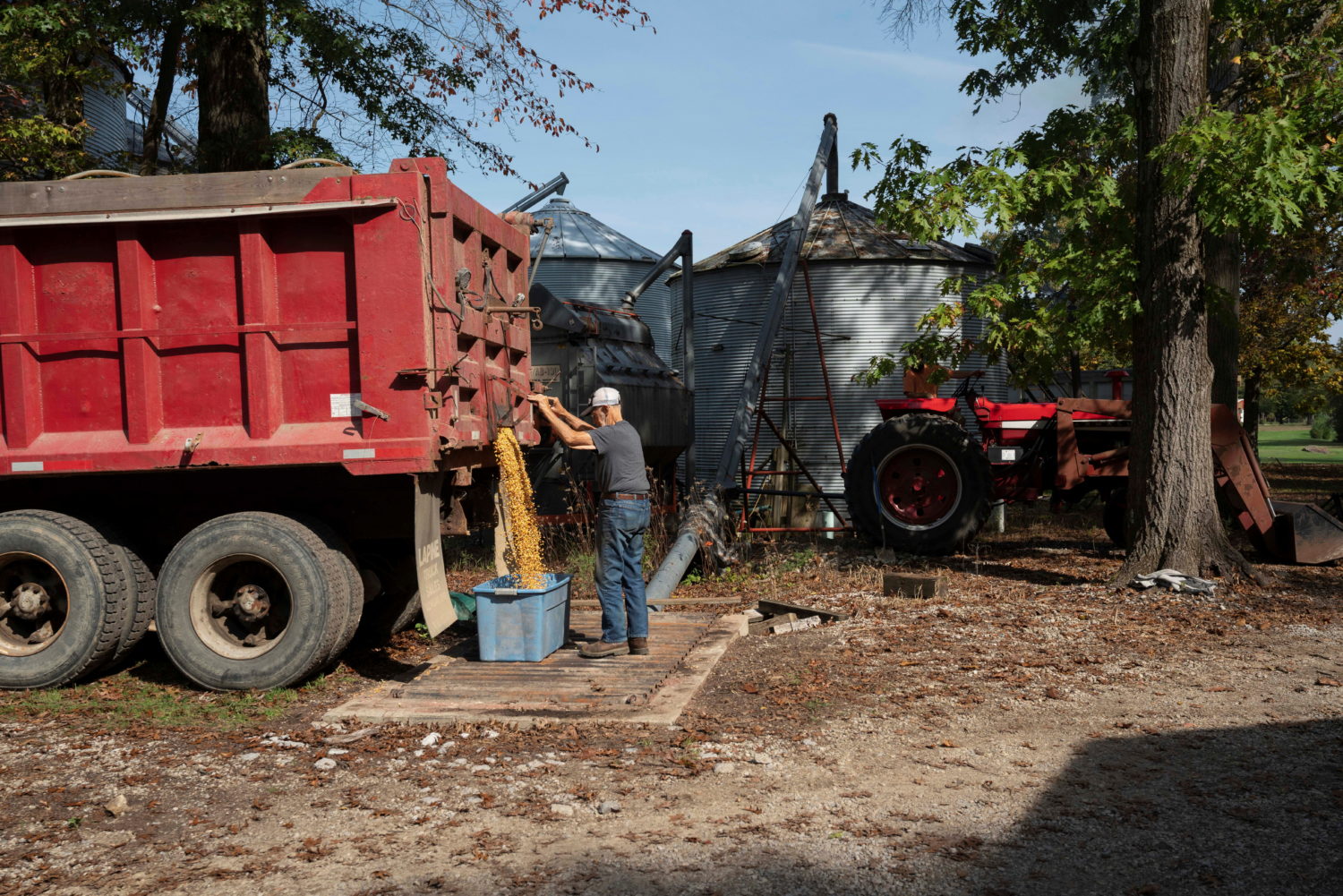 By P.J. Huffstutter and Mark Weinraub

CHICAGO (Reuters) – Dale Hadden cannot find any spare tires for his combine harvester. So the Illinois farmer told his harvest crew to avoid driving on the sides of roads this autumn to avoid metal scraps that could shred tires.

New Ag Supply in Kansas is pleading with customers to order parts now for spring planting. And in Iowa, farmer Cordt Holub is locking up his machinery inside his barn each night, after thieves stole hard-to-find tractor parts from a local Deere & Co dealership.

“You try to baby your equipment, but we’re all at the mercy of luck right now,” said Holub, a fourth-generation corn and soybean farmer in Buckingham, Iowa.

Manufacturing meltdowns are hitting the U.S. heartland, as the semiconductor shortages that have plagued equipment makers for months expand into other components. Supply chain woes now pose a threat to the U.S. food supply and farmers’ ability to get crops out of fields.

Farmers say they are scrambling to find workarounds when their machinery breaks, tracking down local welders and mechanics. Growers looking to buy tractors and combines online are asking for close-up photos of the machine’s tires, because replacements are expensive and difficult to find, said Greg Peterson, founder of the Machinery Pete website which hosts farm equipment auctions.

“As harvest ends, we will see farmers at equipment auctions not for the machinery – but for parts,” Peterson said. “We’re already hearing from guys talking about buying a second planter or sprayer, just for parts.”

For some farmers, the shortages are forcing them to reuse – or repair – old parts.

At their small welding shop in western Washington, Rami and Bob Warburton can barely keep up with all the orders from farmers needing something repaired from fittings for irrigation systems to a cracked bulldozer bucket.

“We were in the middle of a drought up here,” Rami Warburton said. “At that time, they couldn’t wait to water their fields for a month. The crops will be dead by then.”

Kinks in the supply chain due to COVID-19 shutdowns in manufacturing hubs in the United States and Asia, a container shortage snarling major ports, and a dearth of workers prevent equipment manufacturers from fully cashing in on a lucrative moment, when grain prices have soared to the highest in nearly a decade.

The Purdue University/CME Group Ag Economy Barometer, a monthly measure of farmer economic sentiment, fell 10% to its lowest level since July 2020 in early October. Supply concerns are weighing heavily on growers, with 55% of farmers surveyed saying that low inventories have affected their plans to buy machinery.

Access to steel, plastic, rubber and other raw materials has been scarce during the pandemic, and manufacturers are preparing for even more shocks after power shortages forced several Chinese smelters to cut production in recent weeks.

Toornman said staff levels are dropping at some suppliers in the Dakotas, Nebraska and Texas, as workers object to President Joe Biden’s vaccine mandate, drop out of the workforce for fear of getting COVID-19 or move to other jobs.

“It’s the perfect storm of Tylenol moments,” Toornman said. “It’s one headache after another.”

The supply squeeze has put particular pressure on equipment dealerships, who typically see their service business boom during the traditional September through November harvest season.

This year, some have resorted to sifting through decade-old inventory for solutions. One pain point for dealerships is an industry-wide shortage of GPS receivers, which are used to run tractor guidance and data systems.

At Ag-Pro, the largest privately-owned Deere & Co dealership in North America, staff in Ohio have been digging out GPS units that date back to 2004. Until now, they were essentially worthless.

But producers can still use them to record a digital harvest map of their farms – something many need when talking to their bankers, landlords and crop insurance agents.

Equipment manufacturers are faced with a painful choice this harvest season: Send parts to factories to build new tractors and combines to sell to farmers or redirect those parts into the field to repair broken equipment for existing customers?

For AGCO and rival manufacturer CNH Industrial N.V., the answer is the latter.

“You can’t afford not to support those customers in the field,” AGCO’s Toornman said. “When you’re harvesting, timing is everything.”

That lag has forced the company to turn some factory parking lots into storage lots. At CNH’s combine plant in Grand Island, Nebraska, hundreds of unfinished combines sit outside, waiting for parts.

Meanwhile, CNH is redirecting components that can be used on its Case IH and New Holland equipment to customers in the field, a company representative said.

CNH has been signaling to dealers that supply chain problems and parts shortages for Case IH farm equipment are ongoing, according to Reuters interviews with six dealers. The manufacturer said in a statement it is meeting customer needs “the best we can given these unprecedented challenges.”

But component shortages are “particularly challenging for farmers facing what is already a short window of time to harvest,” said Luke Gakstatter, senior vice president of Deere’s aftermarket and customer support.

In some cases, the company has delivered unfinished machinery to customers. Missouri farmer Andy Kapp’s brand new combine rolled off the assembly line missing some of the high-tech cameras that help provide the very efficiency he paid hundreds of thousands of dollars for.

But he is using it anyway, and even has stocked up on some extra parts, in case the combine breaks down.

“As you get toward the end of harvest, machinery and people get more tired,” Kapp said. “It’s a new machine. It won’t surprise us if there are a few loose bolts.”