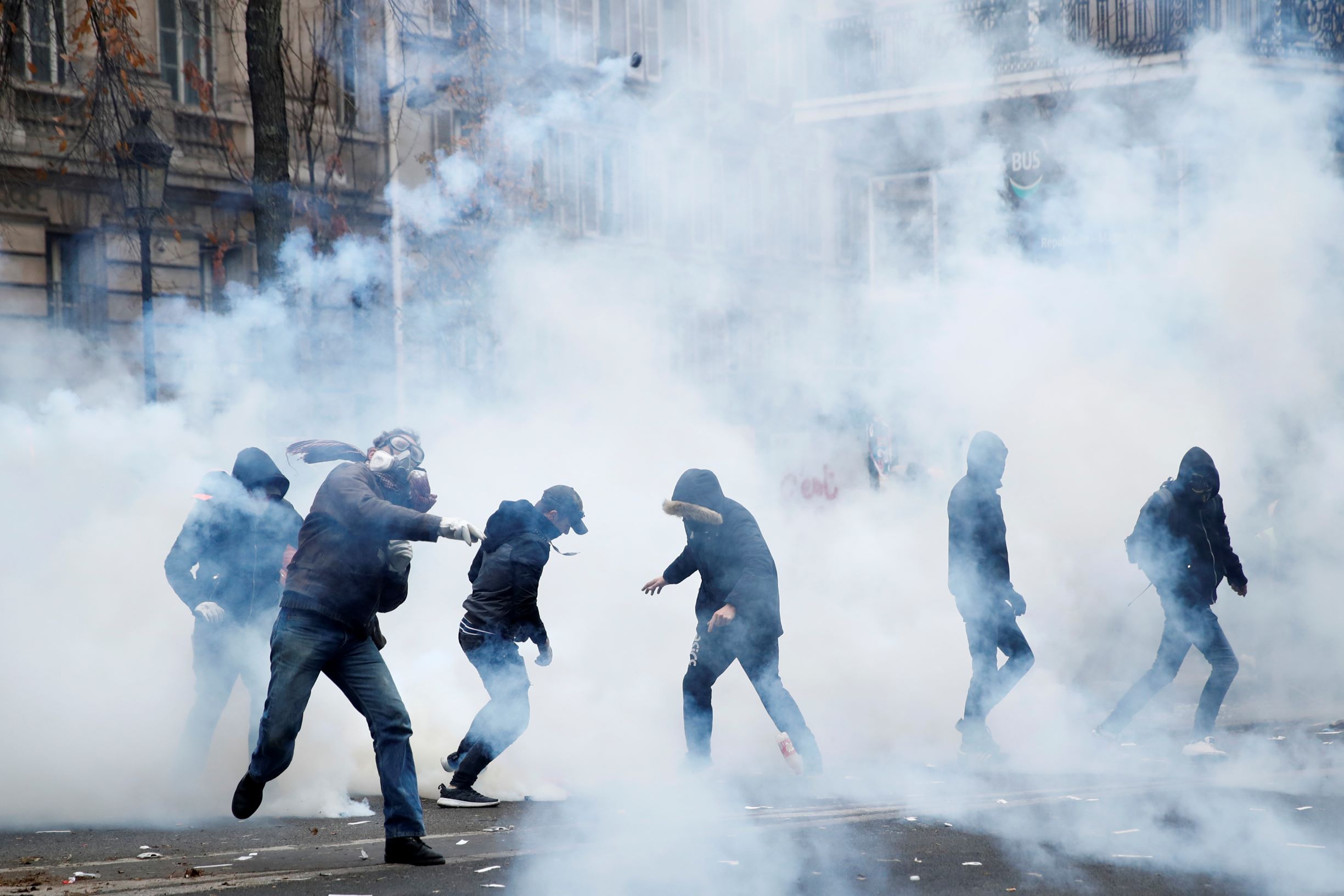 PARIS (Reuters) – Police fired tear gas at protesters in the center of Paris on Thursday and public transport ground to a near halt in one of the biggest strikes in France for decades, aimed at forcing President Emmanuel Macron to ditch a planned reform of pensions.

The strike pits Macron, a 41-year-old former investment banker who came to power in 2017 on a promise to open up France’s highly regulated economy, against powerful trade unions who say he is set on dismantling worker protections.

The outcome depends on who blinks first – the unions who risk losing public support if the disruption goes on for too long, or the government which fears voters could side with the unions and blame officials for the standoff.

“People can work around it today and tomorrow, but next week people may get annoyed,” said 56-year-old cafe owner Isabelle Guibal.

Rail workers voted to extend their strike through Friday, while labor unions at the Paris bus and metro operator RATP said their walkout would continue until Monday.

Trade unions achieved their initial objective on Thursday, as workers at transport enterprises, schools and hospitals across France joined the strike. In Paris, commuters had to dust off old bicycles, rely on car pooling apps, or just stay at home. The Eiffel Tower had to close to visitors.

On Thursday afternoon, tens of thousands of union members marched through the center of the capital in a show of force.

Trouble erupted away from the main protest when people in masks and dressed in black ransacked a bus stop near the Place de la Republique, ripped up street furniture, smashed shop windows and threw fireworks at police.

Police in riot gear responded by firing tear gas, Reuters witnesses said. Nearby, police used truncheons to defend themselves from black-clad protesters who rushed at them. Prosecutors said, in all, 57 people were detained.

Macron wants to simplify France’s unwieldy pension system, which comprises more than 40 different plans, many with different retirement ages and benefits. Rail workers, mariners and Paris Opera House ballet dancers can retire up to a decade earlier than the average worker.

Macron says the system is unfair and too costly. He wants a single, points-based system under which for each euro contributed, every pensioner has equal rights.

Macron has already survived one major challenge to his rule, from the grassroots “Yellow Vest” protesters who earlier this year clashed with police and blocked roads around France for weeks on end.

Having emerged from that crisis, he carries himself with a swagger on the world stage, publicly upbraiding U.S. President Donald Trump this week over his approach to the NATO alliance and counter-terrorism.

But the pension reform – on which polls show French people evenly split between supporters and opponents – is fraught with risk for him as it chips away at social protections many in France believe are at the heart of their national identity.

“People are spoiling for a fight,” Christian Grolier, a senior official from the hard-left Force Ouvriere union which is helping organize the strike, told Reuters.

The SNCF state railway said only one in 10 high-speed TGV trains would run and police reported power cables on the line linking Paris and the Riviera had been vandalized. The civil aviation authority asked airlines to cancel 20% of flights because of knock-on effects from the strike.

Past attempts at pension reform have ended badly for the authorities. Former president Jacques Chirac’s conservative government in 1995 caved into union demands after weeks of crippling protests.