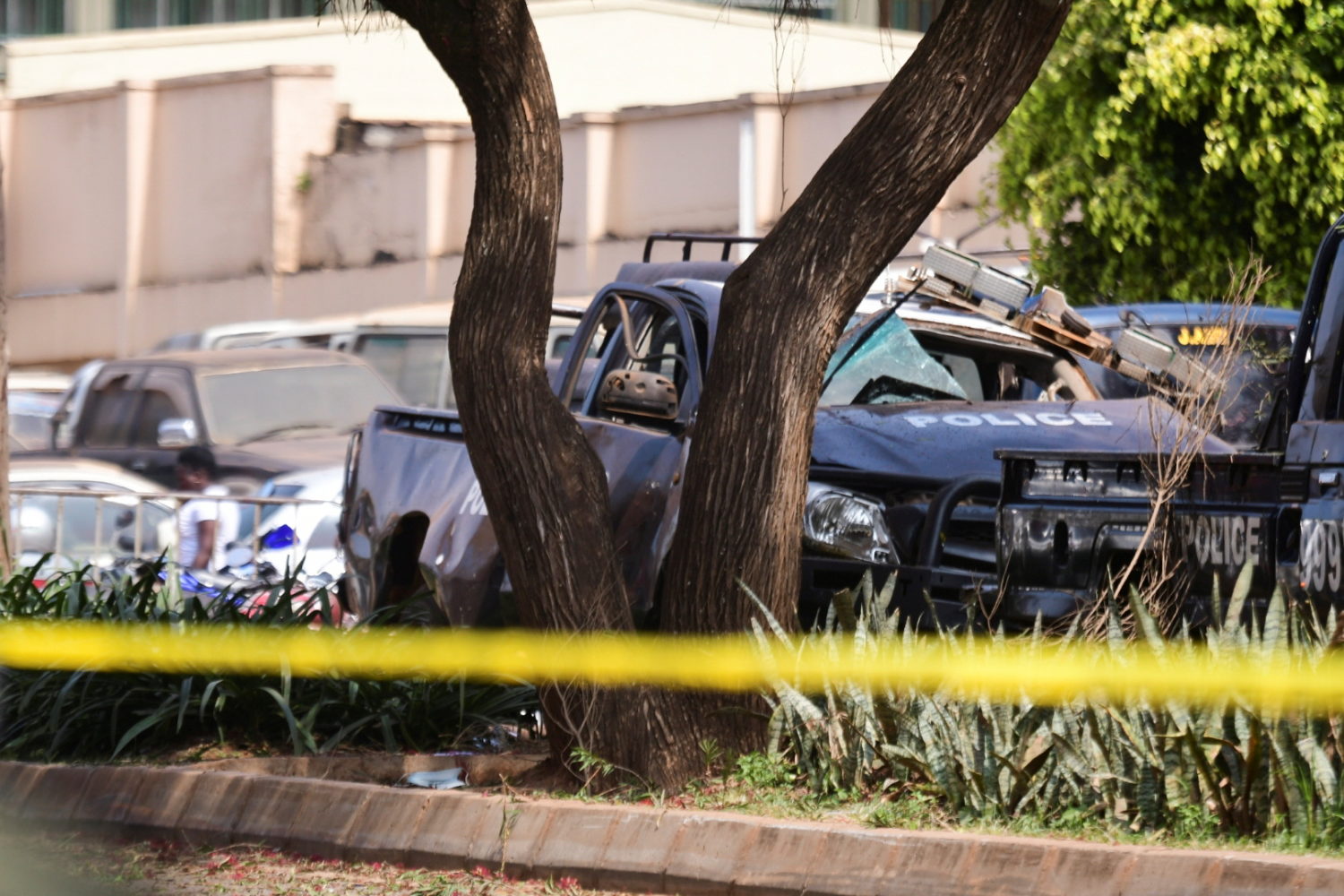 KAMPALA (Reuters) -A triple suicide bombing killed at least three people in the heart of Uganda’s capital on Tuesday, sending members of parliament and others rushing for cover as cars burst into flames in the latest in a wave of bomb attacks.

The blasts in Kampala shocked a nation that is known as a bulwark against violent Islamist militants in East Africa, and whose leader has spent years cultivating Western security support.

At least 33 people were being treated in hospital, including five who were in critical condition, police spokesperson Fred Enanga said.

The death toll including the three bombers was six, Enanga said.

A diplomat told Reuters two police were among the victims. Enanga confirmed the death toll included police but declined to give further details.

There was no immediate claim of responsibility. Police said intelligence indicated the Islamic State-aligned Allied Democratic Forces (ADF) were responsible.

“Our intelligence … indicates that these are domestic terror groups that are linked to ADF,” Enanga said.

The explosions – the first near the central police station and the second very close to parliament – sent bloodied office workers rushing for cover over shards of broken glass as a plume of white smoke rose above the downtown area.

A suicide bomber wearing a backpack carried out the first blast near the checkpoint at the police station, which killed two people, Enanga said. The second attack, involving two suicide bombers on motorbikes, killed one other person.

“A booming sound like that from a big gun went off. The ground shook, my ears nearly went deaf,” said Peter Olupot, a 28-year-old bank guard who was near the attack close to parliament.

“I saw a vehicle on fire and everyone was running and panicking. I saw a boda boda (motorcycle) man – his head was smashed and covered in blood.”

A Reuters journalist saw burned cars behind a police cordon at the scene and a reporter with local television station NTV Uganda said he saw two bodies in the street.

Anti-terrorism police caught another person who was preparing to carry out an attack, Enanga said, adding: “We are now pursuing other members of the terror group.”

The al Qaeda-linked Somali insurgent group al Shabaab has carried out deadly attacks in Uganda in the past, including a 2010 attack that killed 70 people.

Ugandan soldiers are fighting al Shabaab in Somalia as part of an U.N.-backed African Union peacekeeping force. An al Shabab spokesman was not immediately available for comment.

The ADF is a separate group, founded by Ugandan Muslims but now largely active in the forested mountains of the neighboring Democratic Republic of Congo, where it has been blamed for thousands of civilian deaths.

Last month, Islamic State made its first claim of responsibility for a blast in Uganda – an attack on a police station in Kampala’s Kawempe neighborhood in which no one was killed.

It later also said a “security detachment” in “Central Africa Province” had placed a bomb in a restaurant. Police said it killed a waitress and wounded three others, and linked it to the ADF, which has pledged allegiance to Islamic State.

Also last month, Ugandan police said a suicide bomber had blown up a bus, killing only himself. His affiliation was unclear.

“With the more recent affiliation of its main faction to ISIS (Islamic State), a number of foreigners from across East Africa with more globalist jihadist agendas have been arriving into its camps,” he said.