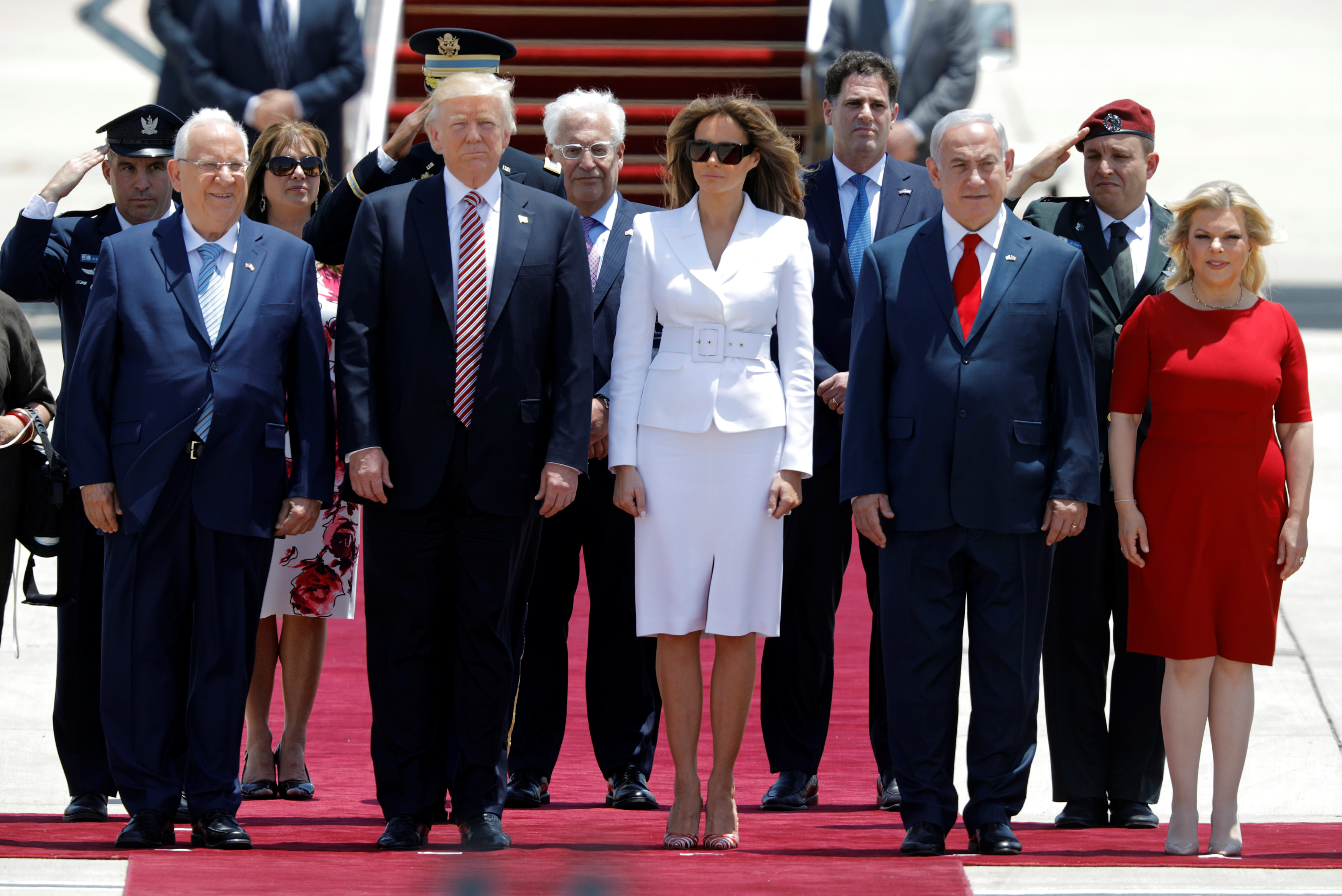 JERUSALEM (Reuters) – U.S. President Donald Trump said on Monday that he had come to Israel from a weekend visit to Saudi Arabia with new reasons to hope that peace and stability could be achieved in the Middle East.

On the second leg of his first overseas trip as president, Trump was to hold talks separately with Israeli Prime Minister Benjamin Netanyahu and Palestinian President Mahmoud Abbas.

The U.S. leader visited the Church of the Holy Sepulchre in Jerusalem’s walled Old City and was due to pray at Judaism’s Western Wall. He travels on Tuesday to Bethlehem in the occupied West Bank at the end of a stopover lasting 28 hours.

Netanyahu and his wife Sara, as well as President Reuven Rivlin and members of the Israeli cabinet, were at Tel Aviv’s Ben-Gurion airport to greet Trump and first lady Melania in a red carpet ceremony after what is believed to have been the first direct flight from Riyadh to Israel.

“During my travels in recent days, I have found new reasons for hope,” Trump said in a brief speech on arrival.

“We have before us a rare opportunity to bring security and stability and peace to this region and its people, defeating terrorism and creating a future of harmony, prosperity and peace, but we can only get there working together. There is no other way,” he said.

Trump’s tour comes in the shadow of difficulties at home, where he is struggling to contain a scandal after firing James Comey as FBI director nearly two weeks ago. The trip ends on Saturday after visits to the Vatican, Brussels and Sicily.

During his two days in Riyadh, Trump received a warm welcome from Arab leaders, who focused on his desire to restrain Iran’s influence in the region, a commitment they found wanting in the Republican president’s Democratic predecessor, Barack Obama. He also announced $110 billion in U.S. arms sales to Saudi Arabia.

Israel shares the antipathy that many Arab states have toward Iran, seeing the Islamic Republic as a threat to its very existence.

“What’s happened with Iran has brought many of the parts of the Middle East toward Israel,” Trump said in public remarks at a meeting in Jerusalem with Rivlin.

He also urged Iran to cease “its deadly funding, training and equipping of terrorists and militias”.

But Iran’s freshly re-elected pragmatist president, Hassan Rouhani, said regional stability could not be achieved without Iran’s help, and accused Washington of supporting terrorism with its backing for rebels in Syria.

He said the summit in Saudi Arabia “had no political value, and will bear no results”.

“Who can say the region will experience total stability without Iran? Who fought against the terrorists? It was Iran, Syria, Hezbollah and Syria. But who funded the terrorists?”

Rouhani also said Iran would continue a ballistic missile program that has already triggered U.S. sanctions, saying it was for defensive purposes only. 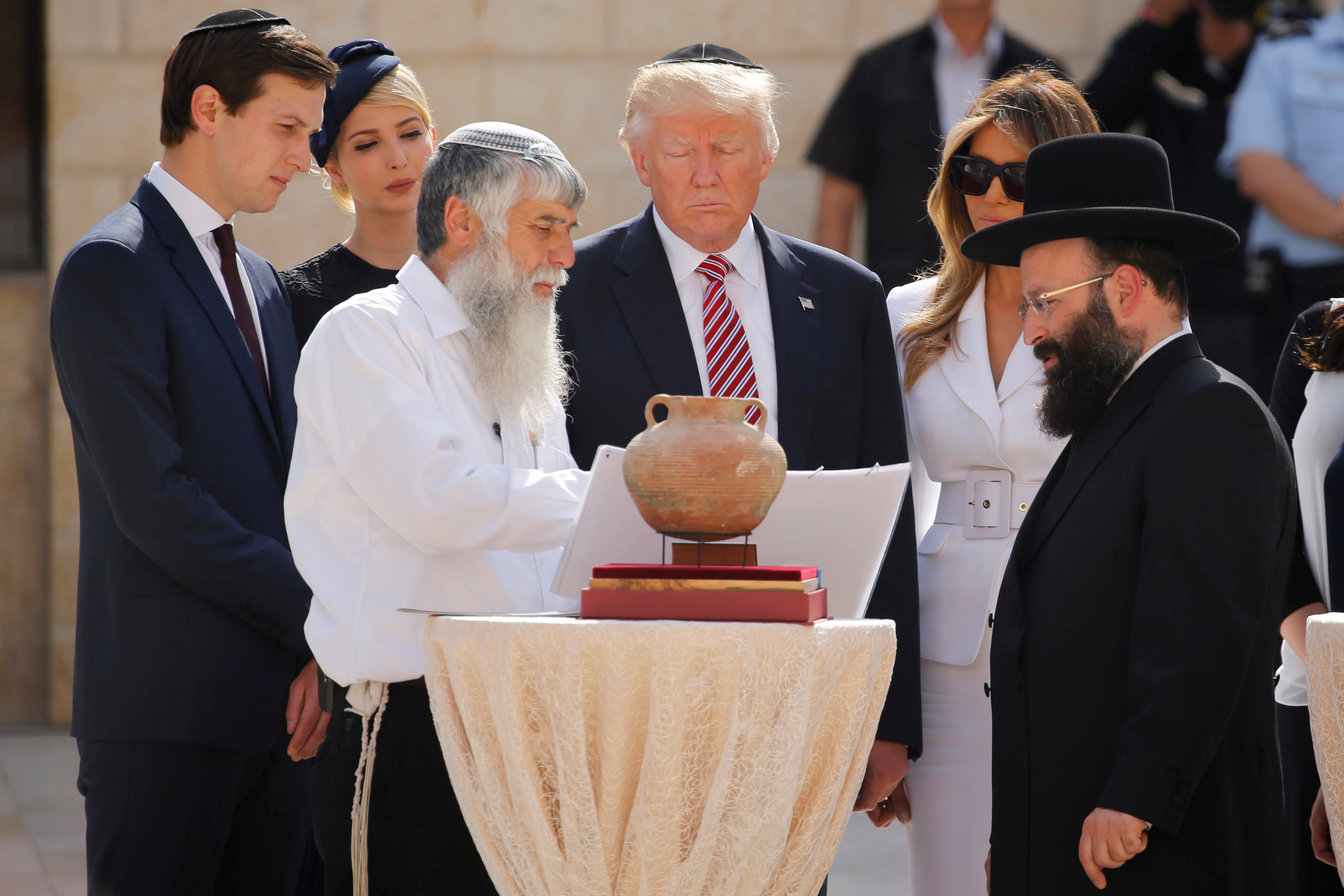 Earlier, at the airport, Netanyahu said Israel hoped Trump’s visit would be a “milestone on the path towards reconciliation and peace”.

But he also repeated his right-wing government’s political and security demands of the Palestinians, including recognition of Israel as a Jewish state.

Trump has vowed to do whatever is necessary to broker peace between Israel and the Palestinians — something he has called “the ultimate deal” — but has given little indication of how he could revive negotiations that collapsed in 2014.

U.S. Secretary of State Rex Tillerson told reporters en route to Tel Aviv that any three-way meeting between Trump, Netanyahu and Abbas was for “a later date”.

When Trump met Abbas this month in Washington, he stopped shortly of explicitly recommitting his administration to a two-state solution to the decades-old conflict, a long-standing foundation of U.S. policy.

Trump has also opted against an immediate move of the U.S. Embassy in Tel Aviv to Jerusalem, a longtime demand of Israel.

A senior administration official told Reuters last week that Trump remained committed to the measure, which he pledged in his election campaign, but would not announce such a move during this trip. 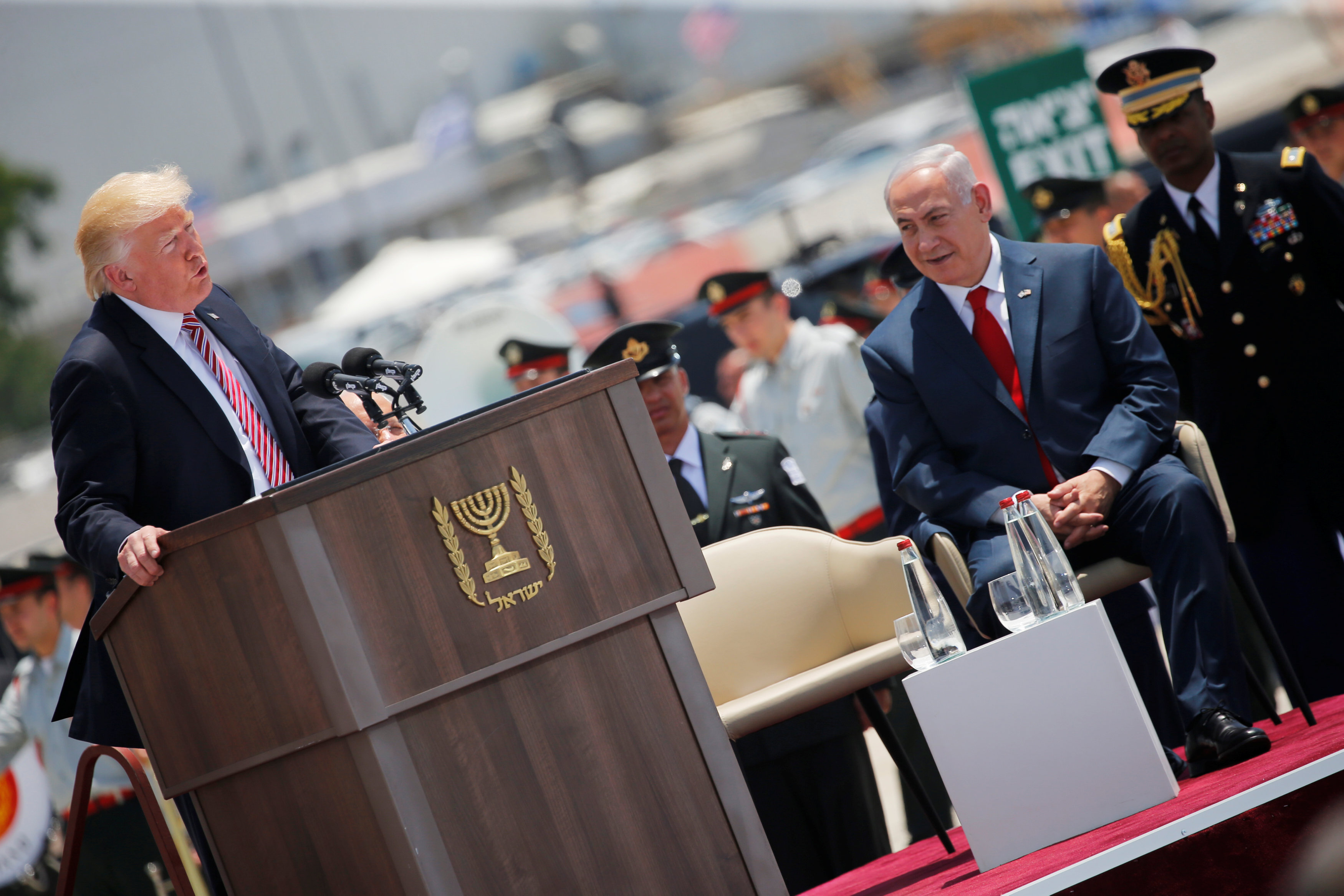 On Sunday, Israel authorized some economic concessions to the Palestinians that it said would improve civilian life in areas controlled by the Palestinian Authority and were intended to respond to Trump’s request for “confidence-building steps”.

The United States welcomed the move but the Palestinians said they had heard such promises before.

Trump will have visited significant centers of Islam, Judaism and Christianity by the end of his trip, a point that his aides say bolsters his argument that the fight against Islamist militancy is a battle between “good and evil”. 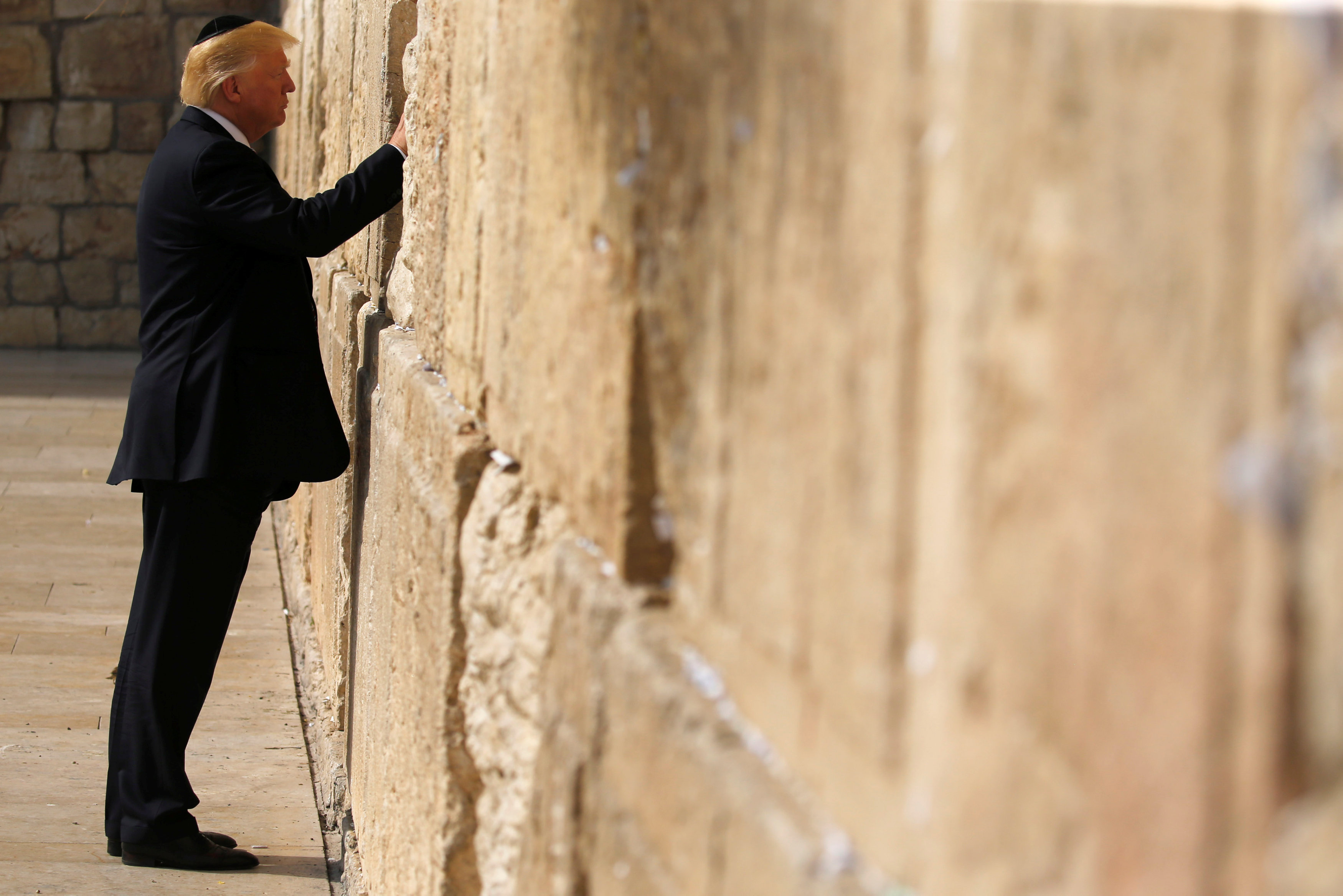 By Luke Baker and Steve Holland

JERUSALEM (Reuters) – President Donald Trump made a historic visit to Jerusalem’s Western Wall on Monday, standing before the holiest place where Jews are permitted to pray and saying a few words before inserting a note between the monumental stones.

He was accompanied by the Rabbi of the Western Wall, Shmuel Rabinowitz, who said on Israel Radio that he recited two psalms with the U.S. leader. One of them, Psalm 122, speaks of Jerusalem as a “city that is united together”.

The ancient stones are in a part of Jerusalem that Israel captured in the 1967 Middle East war. It considers all of Jerusalem its indivisible capital, a status that is not recognized internationally.

“(Trump) said that he understands the significance of the Western Wall for the Jewish people and that’s why he decided to visit here during his first trip to Israel. He is certain he will come here again, perhaps many times. He was very moved,” Rabinowitz said.

“He asked about the size of the Western Wall. We presented the maps, what was in the past, what’s happening now, the excavations, the finds.”

The president was joined on the visit by his son-in-law, Jared Kushner, an Orthodox Jew who went to the wall shortly after Trump and said prayers. Both he and Trump wore black kippahs, the skull caps worn by religious Jews and by others as a mark of respect.

After a few moments standing silently before the limestone edifice, his right hand resting on the blocks, Trump withdrew and smiled briefly. He did not walk backwards from the wall as religious Jews do as a sign of devotion.

It is the first time a sitting U.S. president has visited and prayed at the site. Barack Obama visited in 2008, but it was during the campaign, before he became president.

The Wall, the visible portion of which stands more than 60 feet (20 meters) high, was a retaining structure for the second Jewish temple, which stood on an esplanade in the Old City before being destroyed by the Romans in 70 A.D.

The site is known to Jews as Temple Mount, the holiest place in Judaism, and to Muslims as The Noble Sanctuary, where al-Aqsa Mosque, the third holiest site in Islam, and the gold-topped Dome of the Rock, now stand.

Access to much of the walled Old City, which is divided into four ‘quarters’ — Muslim, Christian, Armenian and Jewish — was shut down on Monday ahead of Trump’s visit. The area has been the scene of multiple stabbing attacks by Palestinians targeting Jews over the past couple of years.

As Trump and Kushner visited the area of the wall set aside for men, Melania Trump and Ivanka, Kushner’s wife, visited a separate nearby section where women are allowed to pray.

Like her husband, Melania held her right hand up against the towering stones and inserted a note among the cracks, something Jews often do as a means of submitting prayers.

Ivanka, who converted to Judaism on marrying her husband, was dressed demurely in black and wore her hair partially covered by a small hat. Video footage showed her crying as she prayed at the wall.

Trump’s visit to the site sparked some controversy during the planning.

Prime Minister Benjamin Netanyahu had sought to accompany Trump to the Western Wall. But the State Department said that would not be permitted as officially the Wall is in East Jerusalem, which Israel occupied 50 years ago, and Palestinians seek as the capital of a future state.