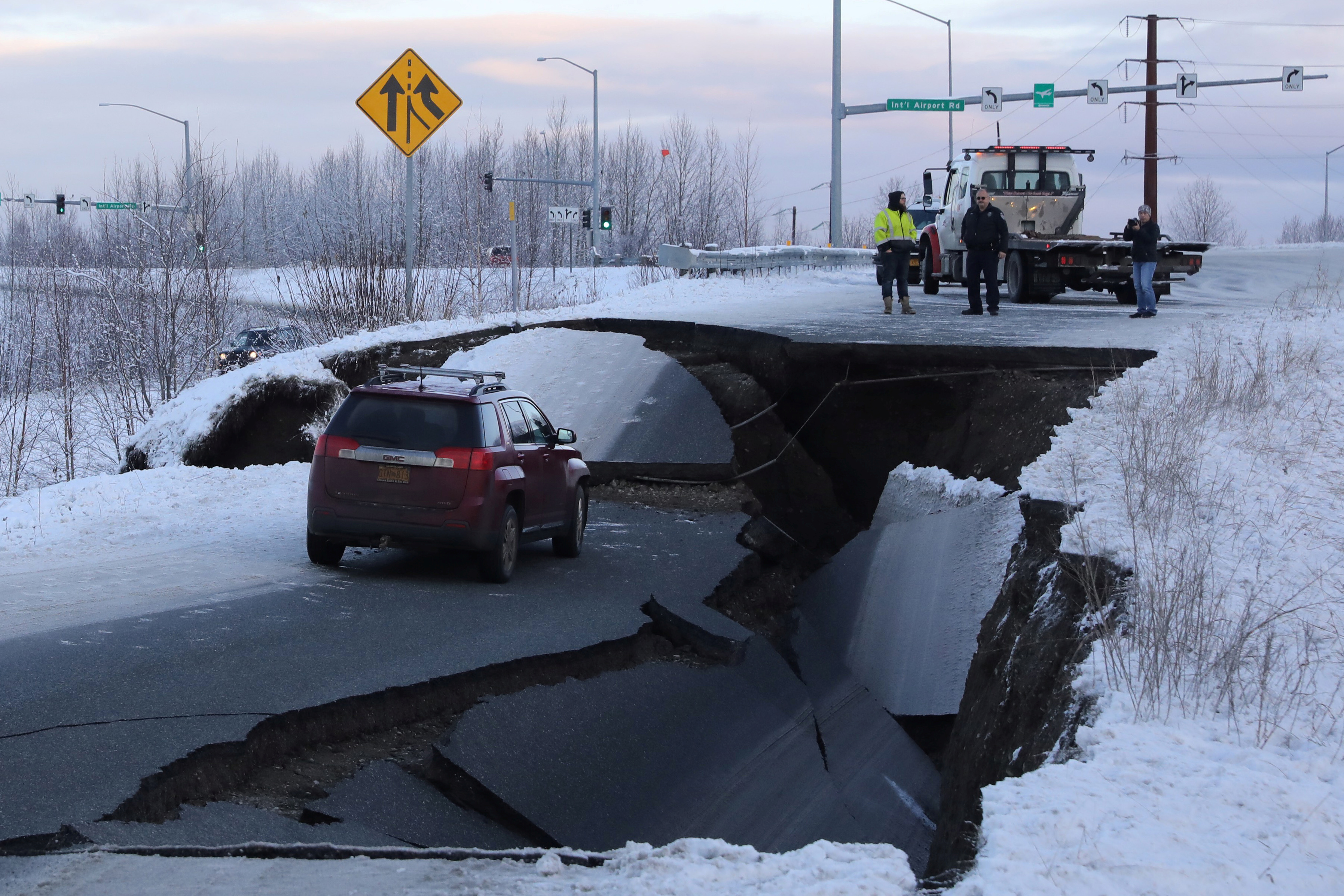 ANCHORAGE, Alaska (Reuters) – A powerful earthquake shook southern Alaska on Friday morning, buckling roads, disrupting traffic and knocking television stations off the air in the state’s largest city, but there were no immediate reports of injuries.

The 7.0 magnitude earthquake’s epicenter was 8.1 miles (13 km) north of Anchorage, home to about 40 percent of the state’s population. The temblor had a depth of 26.7 miles (43 km), the U.S. Geological Survey said.

A tsunami warning was issued for Cook Inlet, which links Anchorage with the Gulf of Alaska, but it was later canceled. 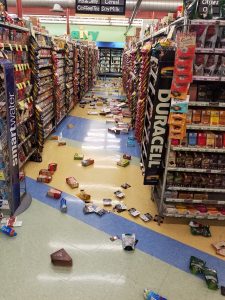 Earthquake damage is seen inside a store in Anchorage, Alaska, U.S. November 30, 2018 in this image obtained from social media. David Harper/via REUTERS

The quake, of a magnitude that is common in Alaska, was followed by numerous aftershocks, and climatologist Rick Thoman reported that he felt it in Fairbanks, about 350 miles north of Anchorage, a city of about 300,000 residents.

“Thought the house was going to come apart,” Anchorage-based climatologist Brian Brettschneider wrote on Twitter, posting a picture of his kitchen floor scattered with items that had fallen from cupboards.

Anchorage suffered major infrastructure damage, police said in a Twitter message, with homes and buildings damaged, and many roads and bridges are closed.

Rush-hour traffic in Anchorage came to a standstill and jammed up heading out of town after the quake struck at around 8:30 a.m. local time (1230 EST/1730 GMT).

Governor Bill Walker said he had issued a disaster declaration and was in direct contact with the White House, which said President Donald Trump was monitoring the situation.

Video posted on social media showed supermarkets with items from shelves strewn across the floors in the quake’s aftermath and of television station KTVA’s newsroom in shambles.

A photo posted by a reporter at KTVA showed a deserted showroom, with part of its ceiling collapsed and debris scattered throughout the room. CNN reported that television station KTUU, an NBC affiliate, also was knocked off the air. 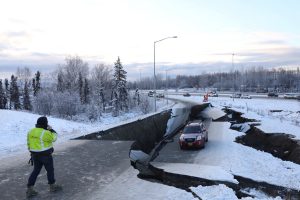 A stranded vehicle lies on a collapsed roadway near the airport after an earthquake in Anchorage, Alaska, U.S. November 30, 2018. REUTERS/Nathaniel Wilder

KTUU’s website featured a photo of a snow-covered highway that had buckled, with a car sitting between two deep fissures crossing the highway.

The Ted Stevens Anchorage International Airport remained open, but arrivals and departure ramps were closed and there were reports of road damage, the airport said on Twitter.

The city’s schools were evacuated and parents were notified to pick up their children. 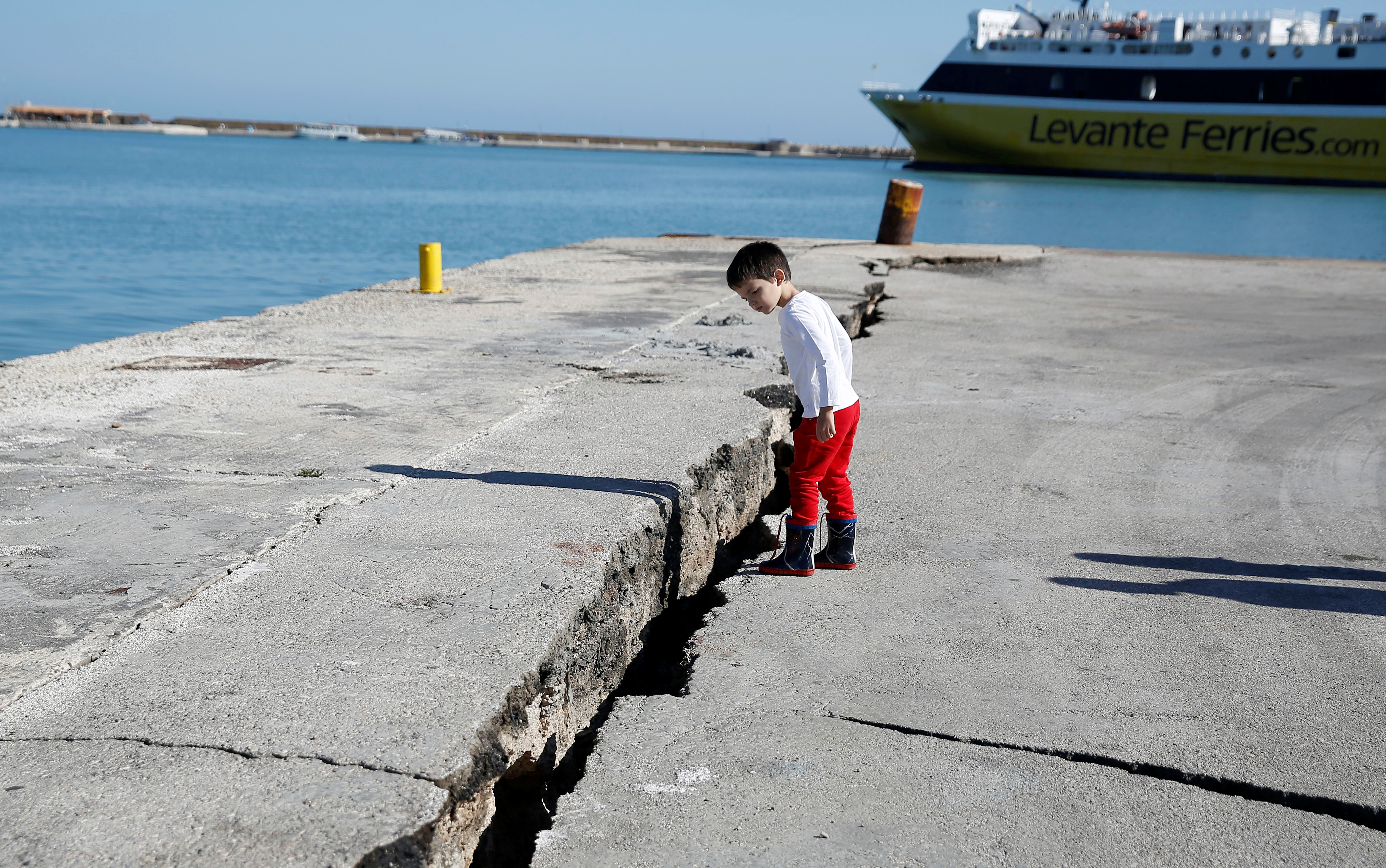 By Angeliki Koutantou and Michele Kambas

The quake sent out tremors felt as far afield as Libya, Italy, Malta and Albania. Greek authorities initially issued a tsunami warning then withdrew the alert.

The magnitude 6.4 quake struck in the Ionian Sea, 50 km (31 miles) south of the island of Zakynthos, also known as Zante, Greece’s Geodynamic Institute reported. The U.S. Geological Survey rated the magnitude at 6.8.

Three people were taken to hospital on the island, two of them slightly injured, a spokesman for Greece’s civil protection agency said. A series of aftershocks, the highest at 5.6, rattled the island and power was briefly disrupted.

Tremors damaged a 15th-century monastery on the nearby islands of Strofades, local media in Zakynthos reported. They also left large cracks in the port of Zakynthos, though authorities there said operations would continue as usual.

“We are not facing any particular problems,” Zakynthos Mayor Pavlos Kolokotsas told Greek state broadcaster ERT. “Calm is being restored.”

“The energy unleashed, based on the angle of the faultline, fanned out towards Italy,” he added.

The quake was fairly shallow, according to the USGS, just 14 km (8.7 miles) below the seabed, which would have amplified shaking.

The EMSC European quake agency said sea levels had risen slightly, by about 20 cm (7.87 inches), but the increase could be higher locally. It later tweeted sea level changes were also observed in Italy. 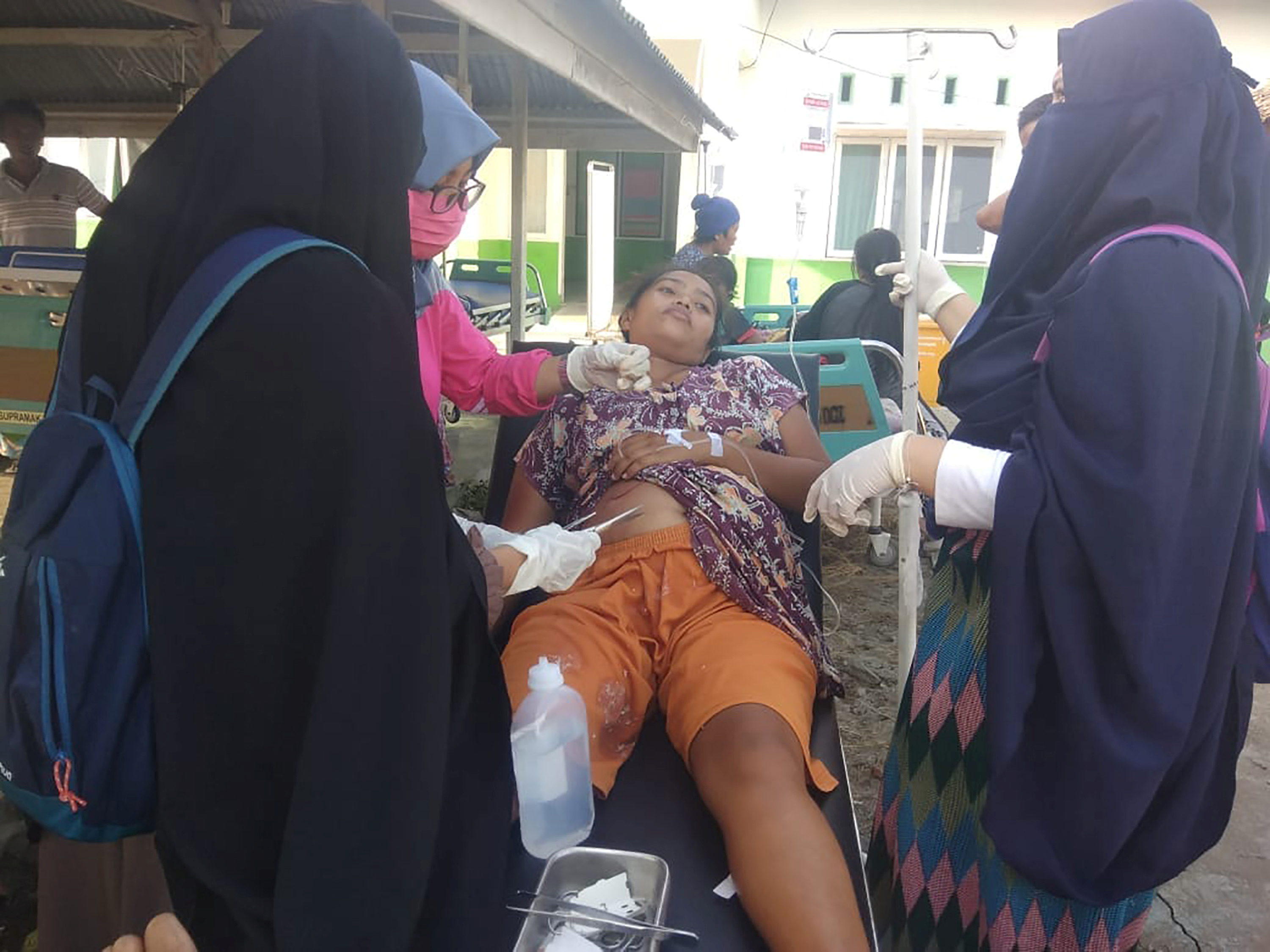 JAKARTA (Reuters) – A tsunami of up to two meters hit a small city on the Indonesian island of Sulawesi after a major 7.5 quake struck offshore on Friday, collapsing buildings and washing a vessel ashore, but there was no word on casualties, officials said.

Authorities received information that Palu had been hit, said Dwikorita Karnawati, who heads Indonesia’s meteorology and geophysics agency, BMKG, amid a rapid series of aftershocks.

“The 1.5- to two-meter tsunami has receded,” Karnawati told Reuters. “It ended. The situation is chaotic, people are running on the streets and buildings collapsed. There is a ship washed ashore,” she added.

BMKG had earlier issued a tsunami warning, but lifted it within the hour.

Amateur footage shown by local TV stations, which could not immediately be confirmed by Reuters, showed waters crashing into houses along Palu’s shoreline.

The national search and rescue agency will deploy a large ship and helicopters to aid with the operation, said agency chief Muhammad Syaugi, adding that he had not been able to contact his team in Palu.

Palu, hit by a 6.2 magnitude quake in 2005 which killed one person, is a tourist resort at the end of a narrow bay famous for its beaches and water sports.

In 2004, an earthquake off the northern Indonesian island of Sumatra triggered a tsunami across the Indian Ocean, killing 226,000 people in 13 countries, including more than 120,000 in Indonesia.

Earlier on Friday, the National Disaster Mitigation Agency (BNPB) said it was having difficulty reaching some authorities in Palu and the fishing town of Donggala, closest to the epicenter of the quake 80 km (50 miles) away at a shallow 10 km underground.

The area was hit by a lighter quake earlier in the day, which destroyed some houses, killing one person and injuring at least 10 in Donggala, authorities said.

The U.S. Geological Survey put the magnitude of the second quake at a strong 7.5, after first saying it was 7.7.

Indonesia sits on the Pacific Ring of Fire and is regularly hit by earthquakes.

A series of earthquakes in July and August killed nearly 500 people on the holiday island of Lombok, hundreds of kilometers southwest of Sulawesi. 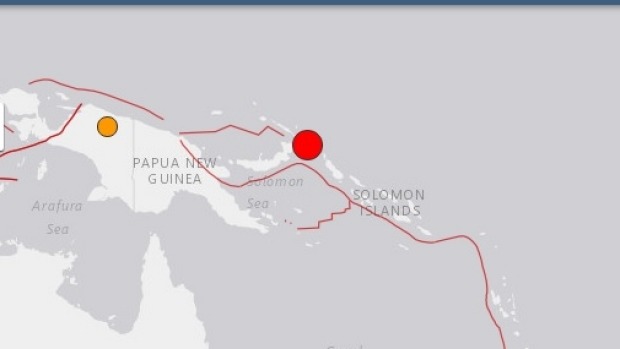 By Jonathan Barrett and Harry Pearl

SYDNEY (Reuters) – People living along Papua New Guinea’s coastline fled to higher ground on Saturday after a 7.9 magnitude earthquake struck east of the Pacific nation, triggering a tsunami warning for parts of its archipelago.

A couple of hours after the quake, the Pacific Tsunami Warning Center (PTWC) said the threat had largely passed, although it said government agencies should continue to monitor coastal tides.

“Based on all available data … the tsunami threat from this earthquake has now passed,” the PTWC said in an updated and final alert after the quake, which struck 157 km (98 miles) east of Rabaul.

The major tremor initially triggered a more widespread tsunami warning for the Pacific region, including Indonesia and the Solomon Islands, but that was pulled back after the U.S. Geological Survey (USGS) downgraded the magnitude slightly from 8. It also revised the depth of the tremor to 103.2 km from its original estimate of 73 kms.

Many residents in the northern parts of the autonomous region of Bougainville sought higher ground amid warnings that tsunami waves were possible.

“The town residents have vacated the whole place; those in the villages live higher up, so they’re ok, it’s just those near the coast,” local resident Christabel Biasu told Reuters by phone.

Quakes are common in Papua New Guinea, which sits on the Pacific’s “Ring of Fire”, a hotspot for seismic activity due to friction between tectonic plates. There were no immediate reports of damage or casualties after Saturday’s major tremor.

A nurse at Buka General Hospital in Bougainville said the quake was so strong it felt like the building she was sleeping in would topple. She said patients were being moved a few kilometers to higher ground.

“We have about 16 beds,” she told Reuters by phone, declining to give her name. “Most of them are already a suburb up.”

The small Pacific nation of Nauru, where one of Australia’s offshore immigration detention centers is located, had a tsunami warning in place, according to the official government Twitter account.

Residents in other parts of Papua New Guinea, including the capital of Port Moresby and Kavieng in the northern tip of New Ireland island, said they had not felt the quake, and no evacuation plans were in place.

SYDNEY (Reuters) – The Solomon Islands plans to dispatch emergency supplies to areas affected by a 6.9 magnitude aftershock on Saturday, a day after a much larger tremor triggered a tsunami warning that send hundreds of coastal people fleeing into the hills.

Both quakes triggered tsunami warnings which were lifted a short time later.

“We are working with the National Disaster Office of the Government and we’ve mobilised our emergency response teams to accompany the government officers and other international non-governmental organisations that are going on this boat,” Zoleveke said.

“We still don’t have that much detail but we know people are really affected by what’s happened,” Zoleveke said.

Zoloveke said based on reports received by two-way radio, Friday’s quake caused significant damage and forced people from homes in the town of Kirakira on Makira Island, about 200 km from the Pacific Island nation’s capital of Honiara.

She said she knew of only one reported casualty, a 25-year-old with non-specific injuries. The remoteness of the region and the failure of communications meant it was impossible to know the full extent of any injuries or damage, she said.

Australia has provided A$50,000 ($37,235) worth of supplies and a helicopter to undertake an initial assessment of affected areas to help target relief efforts, Zoloveke said.

“One of the reasons we need to get them shelter assistance (is) because it’s the start of the wet season here,” Sainovski said.