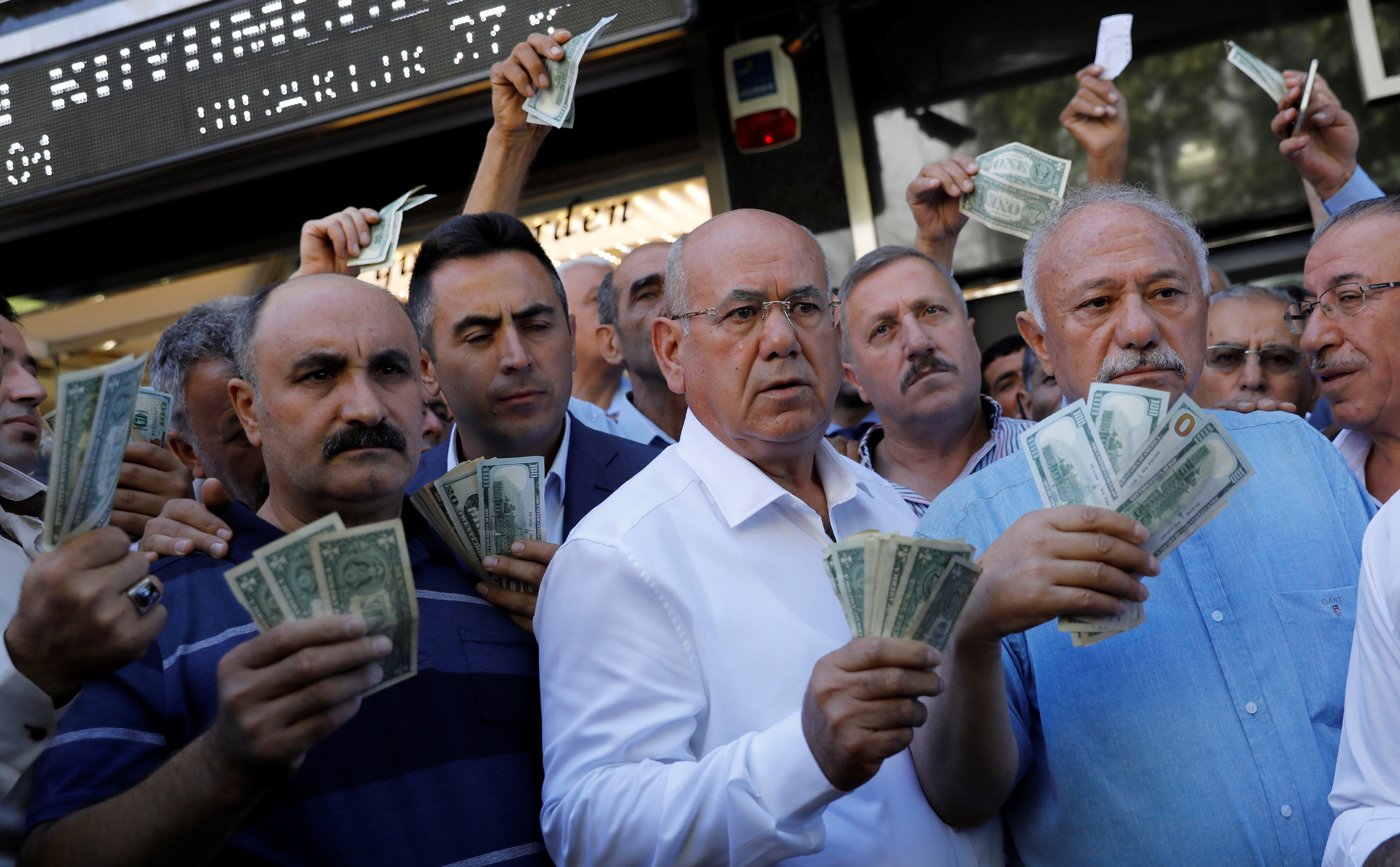 ISTANBUL (Reuters) – President Tayyip Erdogan said on Tuesday that Turkey would boycott electronic products from the United States, retaliating in a row with Washington that helped drive the lira to record lows.

The lira has lost more than 40 percent this year and crashed to an all-time low of 7.24 to the dollar on Monday, hit by worries over Erdogan’s calls for lower borrowing costs and worsening ties with the United States.

The lira’s weakness has rippled through global markets. Its drop of as much as 18 percent on Friday hit European and U.S. stocks as investors fretted about banks’ exposure to Turkey.

On Tuesday the lira recovered some ground, trading at 6.4000 to the dollar at 1751 GMT, up almost eight percent from the previous day’s close and having earlier touched 6.2995.

It was supported by news of a planned conference call in which the finance minister will seek to reassure investors concerned by Erdogan’s influence over the economy and his resistance to interest rate hikes to tackle double-digit inflation.

Erdogan says Turkey is the target of an economic war and has made repeated calls for Turks to sell their dollars and euros to shore up the national currency.

“Together with our people, we will stand decisively against the dollar, forex prices, inflation and interest rates. We will protect our economic independence by being tight-knit together,” he told members of his AK Party in a speech.

The United States has imposed sanctions on two Turkish ministers over the trial on terrorism charges of a U.S. evangelical pastor in Turkey, and last week Washington raised tariffs on Turkish metal exports.

It was unclear whether Erdogan’s call was widely heeded, but a Turkish news agency said traders in Istanbul’s historic Eminonu district converted $100,000 into lira on Tuesday.

Chanting “Damn America”, they unfurled a banner saying “we will win the economic war”, the Demiroren agency said. Amid calls to “burn” the dollars, the group headed to a bank branch where they converted the money, it said.

Erdogan also said Turkey was boycotting U.S. electronic products. “If they have iPhones, there is Samsung on the other side, and we have our own Vestel here,” he said, referring to the Turkish electronics company, whose shares rose 5 percent.

His call met a mixed response on Istanbul streets.

But shopkeeper Umit Yilmaz scoffed. “I have a 16-year-old daughter. See if you can take her iPhone away … All these people are supposed to not buy iPhones now? This can’t be.”

Erdogan said his government would offer further incentives to companies planning to invest in Turkey and said firms should not be put off by economic uncertainty.

“If we postpone our investments, if we convert our currency to foreign exchange because there’s danger, then we will have given into the enemy,” he said.

Although the lira gained some respite on Tuesday, investors say measures taken by the Central Bank on Monday to ensure liquidity failed to address the root cause of lira weakness.

“What you want to see is tight monetary policy, a tight fiscal policy and a recognition that there might be some short-term economic pain — but without it there’s just no credibility of promises to restabilize things,” said Craig Botham, Emerging Markets Economist at Schroders.

Relations between NATO allies Turkey and the United States are at a low point, hurt by a series of issues from diverging interests in Syria, Ankara’s plan to buy Russian defense systems and the detention of pastor Andrew Brunson.

U.S. national security adviser John Bolton on Monday met Turkey’s ambassador to the United States to discuss Brunson’s detention. Following the meeting, U.S. officials have given no indication that the United States has been prepared to give ground in the standoff between the two countries’ leaders.

Ankara has repeatedly said the case was up to the courts and a Turkish judge moved Brunson from jail to house arrest in July. Infuriated by the move, Trump placed sanctions on two Turkish ministers and doubled tariffs on metal imports, adding to the lira’s slide.

Brunson’s lawyer said on Tuesday he had launched a fresh appeal to a Turkish court for the pastor’s release.