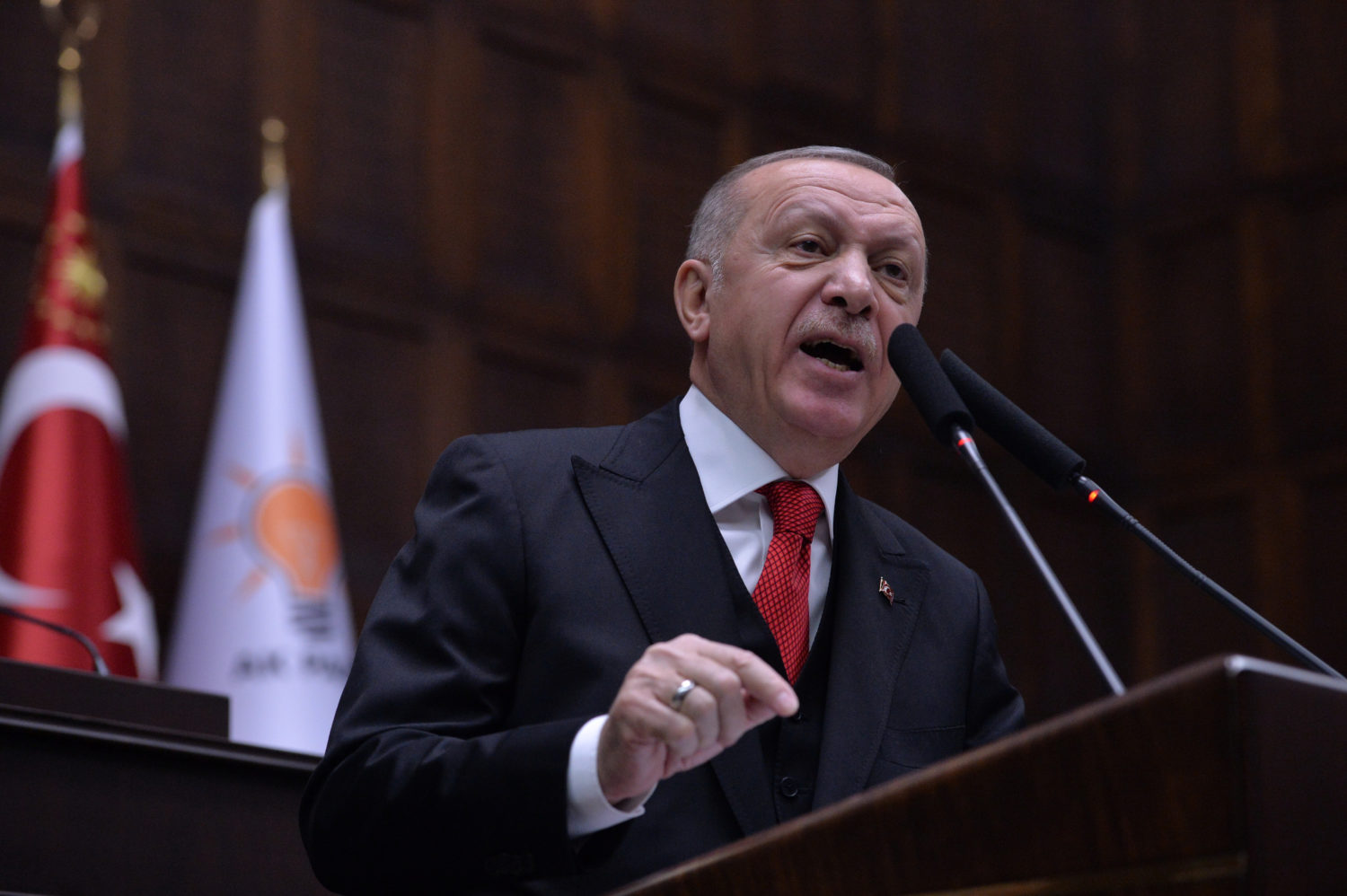 By Tuvan Gumrukcu and Ece Toksabay

ANKARA (Reuters) – Turkish President Tayyip Erdogan said on Wednesday his military would strike Syrian forces by air or ground anywhere in Syria if another Turkish soldier was hurt as the Syrian government fought to regain control of northwestern Idlib province from rebels.

Thousands of civilians meanwhile were heading north to the Turkish-Syrian border, many trudging by foot through snow in freezing temperatures, to escape air strikes and artillery barrages by the Russian-supported government forces.

Erdogan said Turkey was determined to push the Syrian troops beyond Turkish observation posts in Idlib by the end of this month and that Ankara would not allow insurgents in Idlib to give them an excuse to attack.

In turn, the Kremlin accused Turkey of flouting agreements with Russia to neutralize militants in Idlib and said attacks on Syrian and Russian forces there were continuing.

Syrian troops and Iranian-backed militias have been advancing in Idlib in a campaign to destroy the last bastion of insurgents fighting for the past nine years to topple President Bashar al-Assad.

An extensive campaign of air strikes and artillery shelling was underway along the M4 highway, which links Latakia on the Mediterranean coast to the contested crossroads town of Saraqeb south of Idlib city, a humanitarian source said on Wednesday.

The offensive has uprooted hundreds of thousands of people, in the biggest single wave of displacement of the conflict, leaving them desperate for shelter amid atrocious weather conditions.

Many villages along the M5 highway, running south from the city of Aleppo, were now deserted, the source said.

Turkey, which is allied with some rebel groups opposed to Assad, counter-attacked on Tuesday after 13 Turkish soldiers were killed by Syrian shelling in Idlib in the last 10 days.

“If there is the smallest injury to our soldiers on the observation posts or other places, I am declaring from here that we will hit the regime forces everywhere from today, regardless of Idlib’s borders or the lines of the Sochi agreement,” Erdogan said, referring to a 2018 ceasefire accord.

“We will do this by any means necessary, by air or ground, without hesitating,” he told members of his AK Party in Ankara.

Turkey has set up 12 observation posts in Idlib as part of an agreement with Russia and Iran to establish what they called a de-escalation zone.

This month Ankara – which has the second-largest army in NATO – has poured some 5,000 troops and convoys of military vehicles across the border into Idlib, including tanks, armored personnel carriers and radar equipment to bolster its positions.

“The Turkish side undertook to ensure that terrorist groups in Idlib were neutralized,” he told reporters. “These groups are carrying out strikes from Idlib on Syrian forces and also taking aggressive action against our military facilities.”

The Turkish military casualties have sparked some of the most serious confrontations between Ankara and Damascus in the war, which has killed hundreds of thousands of people and made millions refugees, including 3.6 million Syrians in Turkey.

Ankara says it cannot handle another wave of refugees.

In the last five days, some 52,000 people have fled toward the border, mostly from the towns of Atarib and Darat Izza west of Aleppo city, said Selim Tosun, the Turkish Humanitarian Relief Foundation’s (IHH) media adviser in Syria.

In total, the number of people displaced since the fighting intensified in November was about 870,000, he said. Some 400 concrete block dwellings and 2,300 tents had been set up for the displaced people, 70% of whom are children, he said.

Speaking from the border area in northwest Syria, Tosun said traffic was jammed up for several kilometers. Cold weather, a lack of health facilities and the risk of epidemics were all threatening those on the move.

“They have been worn out by the war. They want at least some welfare and peace. They want the attacks to stop,” he said.

The U.N. regional spokesman on Syria, David Swanson, said people were fleeing by night in trucks or by foot in an effort to avoid the attacks.

“People are fleeing northwards not knowing where they will find shelter. Some are seeking shelter in host communities, in camps, makeshift shelters, abandoned buildings, schools, mosques and some people are out in the open in the cold and others are in their vehicles, having fled, and are trapped there. They are waking up each morning not knowing which direction to go,” he told Reuters from Turkey.

Many were also flocking into Idlib city, already host to tens of thousands of previously displaced people.

Damascus and Moscow say the attacks are targeting hardline Islamist militants who control Idlib. Turkey says they are hitting civilians.

Russian President Vladimir Putin and Erdogan agreed in a phone call the sides would continue contacts on Syria, the Kremlin said. Erdogan said he discussed with Putin the issue of the Turkish casualties.

Turkish artillery has been supporting the rebels as they battle to hold on to areas of Idlib. Russia has officers on the ground advising the Syrians on the campaign as well as some ground forces, and Russian warplanes have carried out numerous air strikes.

Separately, the U.S.-led coalition fighting Islamic State said its troops opened fire on Wednesday at a checkpoint in northeast Syria after they came under small arms fire, an incident that underscored the multi-faceted nature of the conflict.