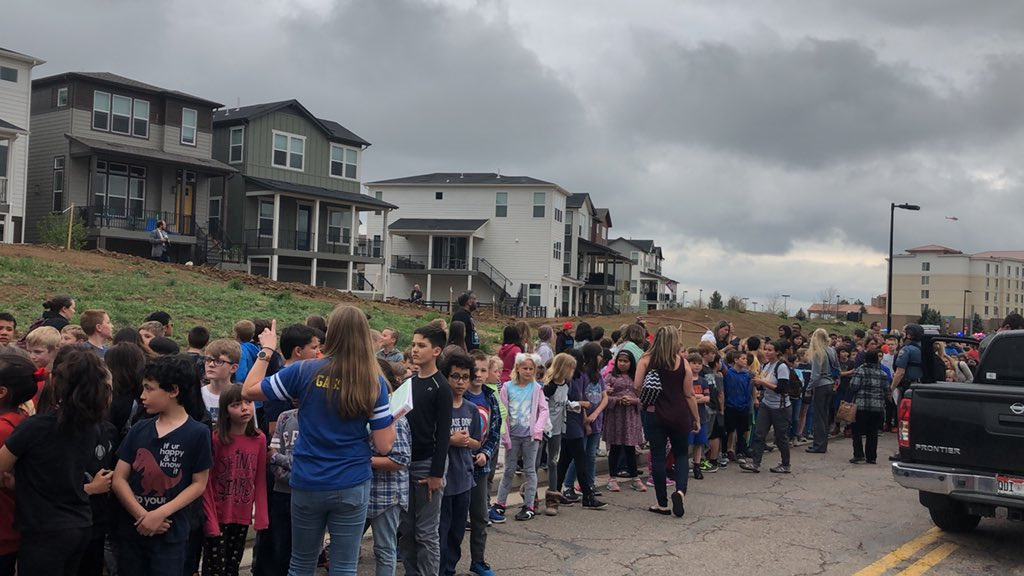 HIGHLANDS RANCH, Colo. (Reuters) – Colorado police on Wednesday tried to determine why two students walked into their school and allegedly opened fire with handguns, killing one person and wounding eight, miles from the site of one of the nation’s deadliest school massacres.

Douglas County sheriff Tony Spurlock told a morning news conference that one of the suspected shooters at the Science, Technology, Engineering and Math (STEM) School in Highlands Ranch, previously identified as male, was a female under the age of 18. The other suspect was Devon Erickson, 18, he said. 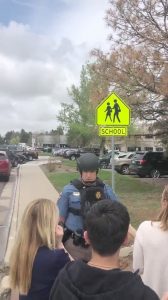 A police officer reassures people waiting outside near the STEM School during a shooting incident in Highlands Ranch, Colorado, U.S. in this May 7, 2019 still frame obtained via social media video. SHREYA NALLAPATI/VIA REUTERS

He declined to identify the person slain in the attack, other than to say he was an 18-year-old male who had been due to graduate in the three days.

The reason for the attack remained unclear, Spurlock said.

Denver’s ABC television affiliate, citing an unidentified police source, reported on Tuesday that one of the suspects wanted to transition to male from female and had been bullied for it.

Spurlock declined to answer a reporter’s question about whether the younger suspect was transgender.

“Right now we are identifying the individual as a female, because that’s where we’re at,” he said. “We originally thought the juvenile was a male by appearance.”

The two suspects opened fire in two separate classrooms and were arrested within minutes at the public charter school about 25 miles (40 km) south of Denver, Spurlock said.

“A student’s life was taken too soon by this act of violence,” Colorado Governor Jared Polis said at a news conference. “I share the heartbreak, the frustration, the sickness.”

Some of the worst mass shootings in the United States have occurred in Colorado.

The attack occurred less than a month after the 20th anniversary of the Columbine High School massacre in nearby Littleton, about 5 miles (8 km) from the Highlands Ranch school.

In 2012 a man opened fire at a movie theater in Aurora, another Denver suburb, killing 12 people and wounding scores more.

What happened inside the STEM school remains unclear.

Spurlock said there was a “struggle” as officers entered the building and some students said one victim was shot in the chest as he tried to tackle a shooter.

A man who identified himself as Fernando Montoya said his 17-year-old son, a junior at STEM, was shot three times when a shooter walked into his classroom and opened fire.