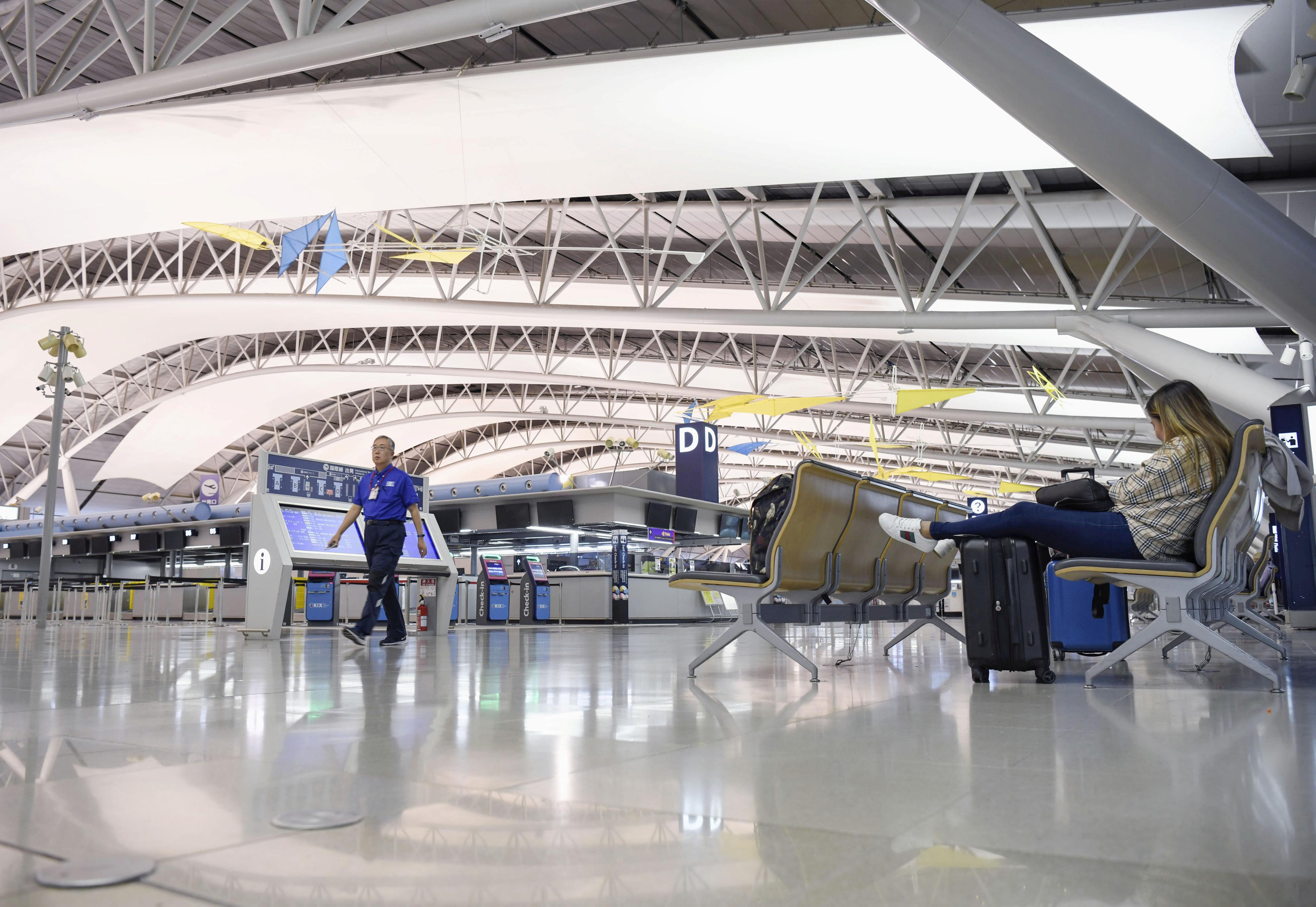 TOKYO (Reuters) – A powerful typhoon brought down trees onto railroad tracks and kicked up debris across Tokyo as it brushed past the Japanese capital early on Monday, killing two people and stranding thousands as train lines were closed or severely delayed.

Typhoon Trami made landfall in western Japan on Sunday evening and threatened heavy rains, strong winds and landslides on the northern-most main island of Hokkaido, the Japan Meteorological Agency said. The island was hit by a deadly earthquake last month.

The typhoon, rated by Tropical Storm Risk as a category 1, the lowest on a five-point scale, killed two people and injured almost 130, public broadcaster NHK said.

Another two people were missing, it said, and almost 400,000 households were without power.

Kansai International Airport in Osaka in western Japan said it had opened its runways as scheduled at 6 a.m. (2100 GMT Sunday), after being closed since 11 a.m. on Sunday.

The airport had only fully reopened on Sept. 21 after being heavily flooded earlier that month by Typhoon Jebi, the most powerful storm to hit Japan in 25 years. 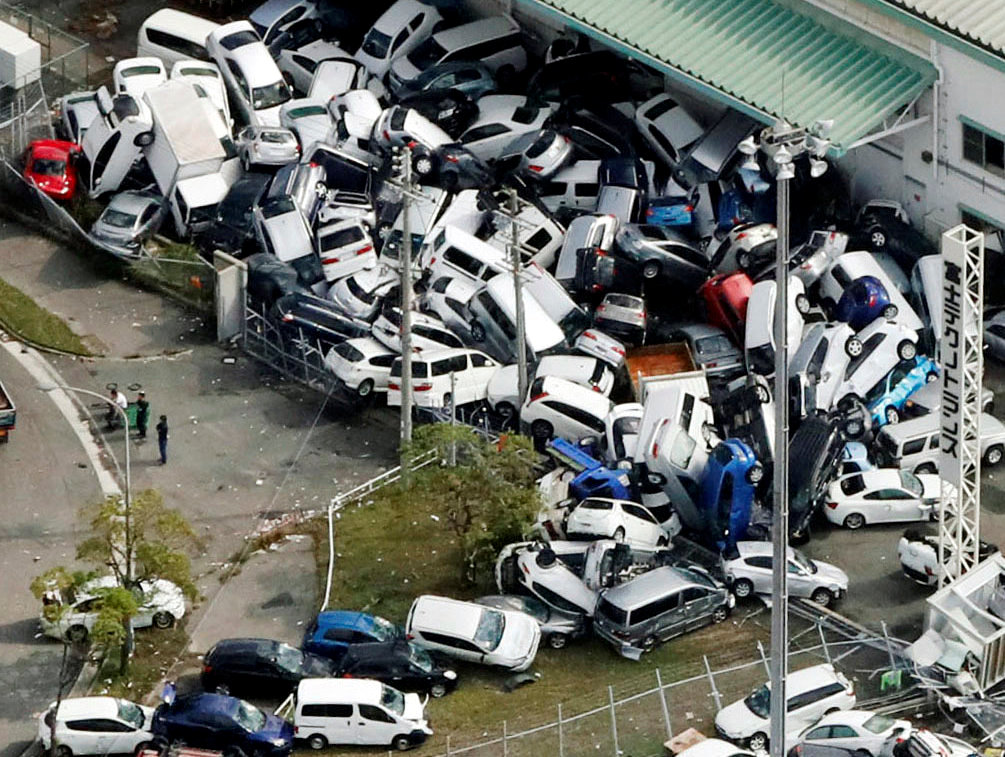 TOKYO (Reuters) – Japan began on Wednesday to clean up after a powerful typhoon killed 11 people, injured hundreds and stranded thousands at a flooded airport, though when the airport in an industrial and tourist hub might reopen was not clear.

Typhoon Jebi, or “swallow” in Korean, was briefly a super typhoon and was the most powerful storm to hit Japan in 25 years. It came after months of heavy rain, landslides, floods and record-breaking heat that killed hundreds of people this summer. 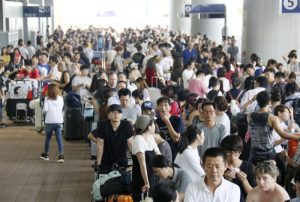 Passengers stranded at Kansai International Airport due to powerful typhoon Jebi queue outside the airport as they wait for the arrival of a special bus service to transport them out of the area, in Izumisato, western Japan, in this photo taken by Kyodo September 5, 2018. Kyodo/via REUTERS

About 3,000 tourists were stuck overnight at Kansai Airport in western Japan, an important hub for companies exporting semiconductors built on reclaimed land on a bay near Osaka and connected to the mainland by a bridge that was damaged when a tanker slammed into it during the storm.

But by afternoon many people had been rescued by bus or ferried by ship from the airport, where puddles still stood on the main runway after it was inundated on Tuesday.

“More than anything else, I really want to take a bath,” one woman told NHK public television.

Chief Cabinet Secretary Yoshihide Suga said on Wednesday afternoon about 470 people were injured. It was uncertain when the airport would reopen and some roads and train lines in the affected areas were still closed, he said.

But the number of households without power had been roughly halved to 530,000.

“The government will continue to do everything possible to tackle these issues with utmost urgency,” Suga told a news conference earlier. 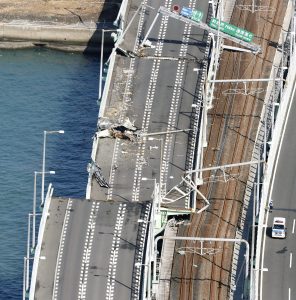 A bridge connecting Kansai airport, damaged by crashing with a 2,591-tonne tanker, which is sent by strong wind caused by Typhoon Jebi, is seen in Izumisano, western Japan, in this photo taken by Kyodo September 5, 2018. Kyodo/via REUTERS

Japan’s JXTG Nippon Oil Energy Corp shut at least one refining units at its 135,000 barrels-per-day Sakai refinery in Osaka due to typhoon damage to part of the cooling tower, the trade ministry said.

Many chip plants operate in the Kansai region. Toshiba Memory, the world’s second-largest maker of flash memory chips, was monitoring developments closely and may need to ship products from other airports if Kansai remains closed, a spokeswoman said.

She said the company was not expecting a major impact because its plant in Yokkaichi in central Japan had not been affected by the typhoon.

It could take several days to a week to reopen Kansai airport depending on the damage, the Yomiuri newspaper quoted an unidentified person in the airline industry as saying.

Winds that in many places gusted to the highest ever recorded in Japan, according to the Japanese Meteorological Agency, left a swathe of damage, with fruit and vegetables, many about to be harvested, hit especially hard.

Prime Minister Shinzo Abe, who was criticized in July for an initially slow response to devastating floods that month, posted updates on the rescue efforts at Kansai.

Jebi’s course brought it close to parts of western Japan hit by rains and flooding in July that killed more than 200 people, but most of the damage this time appeared to be from the wind.