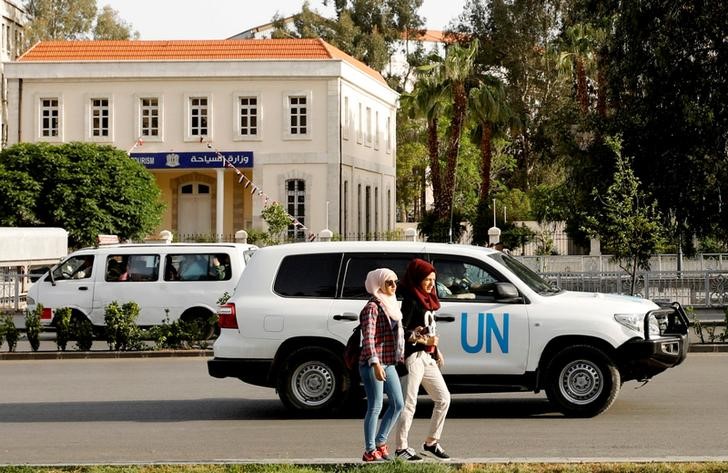 THE HAGUE (Reuters) – The arrival of international chemical weapons inspectors at the location of a suspected poison gas attack in the Syrian town of Douma has been delayed after gunfire at the site during a visit by a U.N. security team on Tuesday, sources told Reuters.

The U.N. security team entered Douma to assess the situation ahead of the planned visit by inspectors from the Organisation for the Prohibition of Chemical Weapons (OPCW), said the sources, who had been briefed on the team’s deployment.

The OPCW inspectors are in Syria to investigate an April 7 incident in which Western countries and rescue workers say scores of civilians were gassed to death by government forces, which Damascus denies.

The United States, Britain and France fired missiles at three Syrian targets on Saturday to punish President Bashar al-Assad for the suspected chemical attack, the first coordinated Western action against Assad in seven years of war.

The U.S.-led intervention has threatened to escalate confrontation between the West and Assad’s backer Russia, although it has had no impact on the fighting on the ground, in which pro-government forces have pressed on with a campaign to crush the rebellion.

Assad is now in his strongest position since the early months of a civil war that has killed more than 500,000 people and driven more than half of Syrians from their homes.

A delay in the arrival of the inspectors at the Douma site has become a source of diplomatic dispute, because Western countries accuse Damascus and Moscow of hindering the mission. The United States and France have both said they believe the delay could be used to destroy evidence of the poison attack.

An official close to the Syrian government said the U.N. security team had been met by protesters demonstrating against the U.S.-led strikes, but did not mention any shooting. “It was a message from the people,” said the official. The mission “will continue its work”, the official said.

Douma was the last town to hold out in the besieged eastern Ghouta enclave, the last big rebel bastion near the capital Damascus, which was captured by a government advance over the past two months. The last rebels abandoned the town on Saturday, hours after the U.S.-led missile strikes, leaving government forces in control of the site of the suspected chemical attack.

Syria’s U.N. ambassador said on Tuesday the fact-finding mission would begin its work in Douma on Wednesday if the U.N. security team deemed the situation there safe.