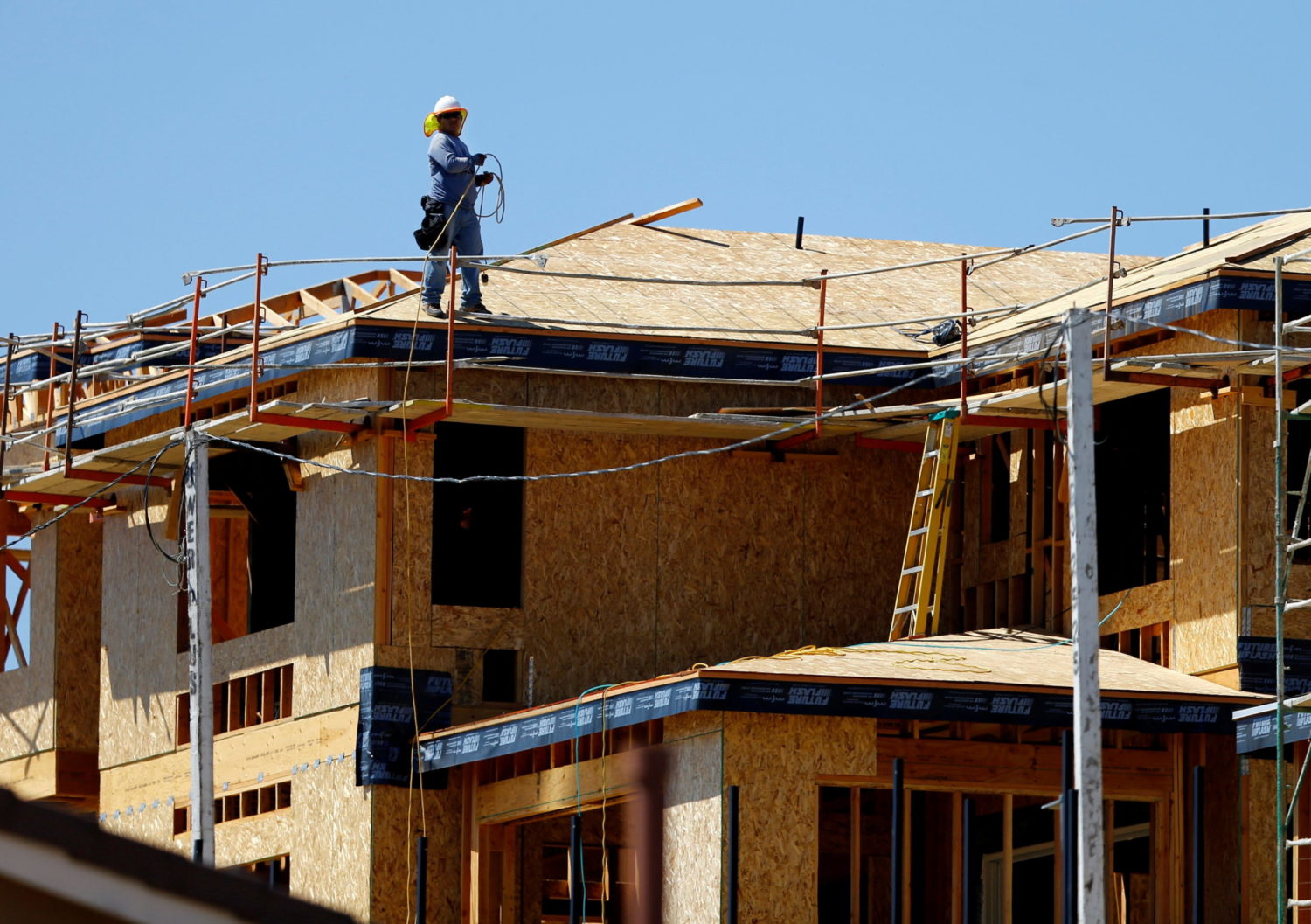 WASHINGTON (Reuters) -U.S. homebuilding surged to nearly a 15-year high in March, but soaring lumber prices amid supply constraints could limit builders’ capacity to boost production and ease a shortage of homes that is threatening to slow housing market momentum.

The sharp rebound reported by the Commerce Department on Friday added to robust retail sales in March in suggesting that the economy was roaring after a brief weather-related setback in February. Increasing COVID-19 vaccinations, warmer weather and massive fiscal stimulus are driving the economy, with growth this year expected to be the strongest in nearly four decades.

But caution is starting to creep in among consumers as the course of the pandemic remains uncertain and inflation is showing signs of heating up. Other data on Friday showed consumer sentiment rose moderately in early April.

“We’re in a unique situation with the economy beginning to rebound from the worst of the pandemic,” said Robert Frick, corporate economist at Navy Federal Credit Union in Vienna, Virginia. “Uncertainties remain, with many businesses yet to reopen, unemployment still high, and COVID-19 levels lower but persistent.”

Housing starts surged 19.4% to a seasonally adjusted annual rate of 1.739 million units last month, the highest level since June 2006. Economists polled by Reuters had forecast starts would rise to a rate of 1.613 million units in March.

Starts soared 37.0% on a year-on-year basis in March. Homebuilding slumped in February as large parts of the country reeled from unseasonably cold weather, including winter storms in Texas and other parts of the densely-populated South region.

Groundbreaking activity increased in the Northeast, Midwest and South, but fell in the West. Permits for future home building rose 2.7% to a rate of 1.766 million units last month, recouping only a fraction of February’s 8.8% plunge. They jumped 30.2% compared to March 2020.

“While housing demand is expected to remain strong, we expect it to diminish somewhat as the year progresses,” said Doug Duncan, chief economist at Fannie Mae in Washington. “Homebuilders continue to face supply constraints, including increasing prices of lumber and other materials.”

Stocks on Wall Street were mostly higher, with the S&P 500 index and the Dow Jones Industrial Average hitting fresh record highs. The dollar slipped against a basket of currencies. U.S. Treasury prices were lower.

The housing market is being fueled by demand for bigger and more expensive accommodations, with millions of Americans continuing to work from home and remote schooling remaining in place as the pandemic enters its second year. Housing supply has been insufficient, with the inventory of previously-owned homes at record lows. This is underpinning homebuilding.

A survey from the National Association of Home Builders on Thursday showed confidence among single-family homebuilders increased in April amid strong buyer traffic. Builders appealed for solutions “to increase the supply of building materials as the economy runs hot in 2021.”

Inflation concerns were on consumers’ minds early this month. A separate report from the University of Michigan on Friday showed its preliminary consumer sentiment index rose to 86.5 from a final reading of 84.9 in March.

Economists had forecast the index would rise to 89.6.

The survey’s one-year inflation expectation jumped to 3.7%, the highest level in nearly a decade, from 3.1% in March. Its five-year inflation outlook was unchanged at 2.7%.

Supply disruptions because of coronavirus-related restrictions are driving up commodity prices. Softwood lumber, which is used for frames and trusses of houses, surged by a record 83.4% on a year-on-year basis in March, according to the latest producer price data published last week. Prices of other building materials such as plywood have also risen sharply.

Port congestion on the West Coast as well as winter weather in Canada that has shut mills and restricted truck shipping were also contributing to the shortages that were driving prices of building materials higher, according to an Institute for Supply Management survey published early this month.

Single-family homebuilding, the largest share of the housing market, surged 15.3% to a rate of 1.238 million units in March. Still, starts remained below last December’s peak, likely constrained by the more expensive building materials.

Single-family building permits rose 4.6% to a rate of 1.199 million units.

“The failure of single-family starts to fully recover to last winter’s peak level despite tight inventories in most metropolitan areas supports the idea builders are holding back,” said Chris Low, chief economist at FHN Financial in New York.

Realtors estimate that single-family housing starts and completion rates need to be in a range of 1.5 million to 1.6 million units per month to close the inventory gap.

The stock of housing under construction rose 0.8% to a rate of 1.306 million units, the highest since September 2006.