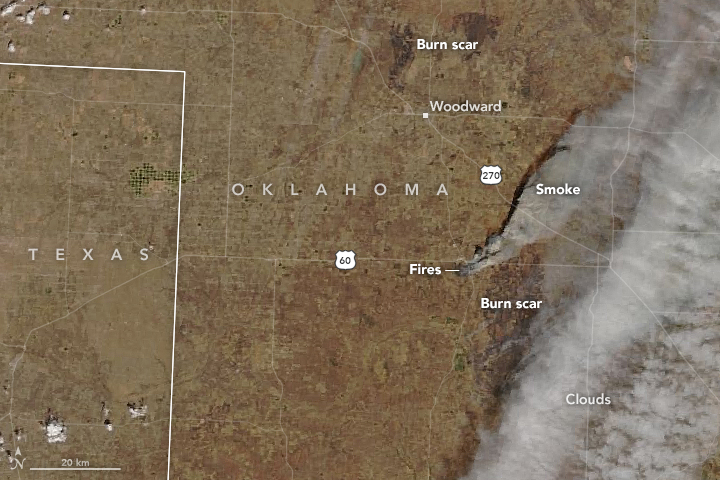 With winds gusting at 30mph, low humidity and very dry conditions, fire officials in Oklahoma say that as bad as it is now, things are looking worse for the week. So far there have been two deaths reported and several counties are ordering evacuations as the flames burn mostly out of control in the Northwest areas of Oklahoma.

According to KOCO News 5 the fires have burned more than 400,000 acre in western Oklahoma, and dry, windy weather has severely hindered firefighting efforts.  Today the counties of Dewey, and the towns of Selling, Talogo and Putnam have been order to evacuate.

In a news release late Sunday night Oklahoma Department of Emergency Management spokeswoman Keli Cain stated that  61-year-old Jack Osben died Thursday in Roger Mills County. He was driving a motor grader to help firefighters put out the fire that began southeast of Leedey,about 110 miles northwest of Oklahoma City. Cain said a woman also died as a result of a fire near Seiling, about 90 miles northwest of Oklahoma City. The woman had been visiting at a residence, near Seiling, Okla., when the fire caused the people there to evacuate the area.The residents made it away from the area and reported to the authorities that the woman was missing. A search was made in the area well within the burn area where a Jeep Cherokee was found with the woman inside.

Because the fire began during the governor’s burn ban and if it should be proven the fire was intentionally set, the person who set the fire could be charged in the woman’s death.

Oklahoma News 4 reported that some volunteer fire departments are asking for donations to help, as fire heads toward many farming and rural towns.  “The wind’s horrible,” Weatherford Fire Chief Mike Karlin said. “We had wind all through the night. Typically, in the night, we get higher humidities, we get lower winds. The only thing that we’ve had is cooler temperatures, and that hasn’t affected the fire conditions at all.”

Weather conditions will be feeding the fire this week as dozens of fire departments attempt to gain control of the flames.  Warnings are out in 19 counties of Oklahoma for severely hazardous fire conditions, prohibiting fires and asking that people be vigilant throughout the state.