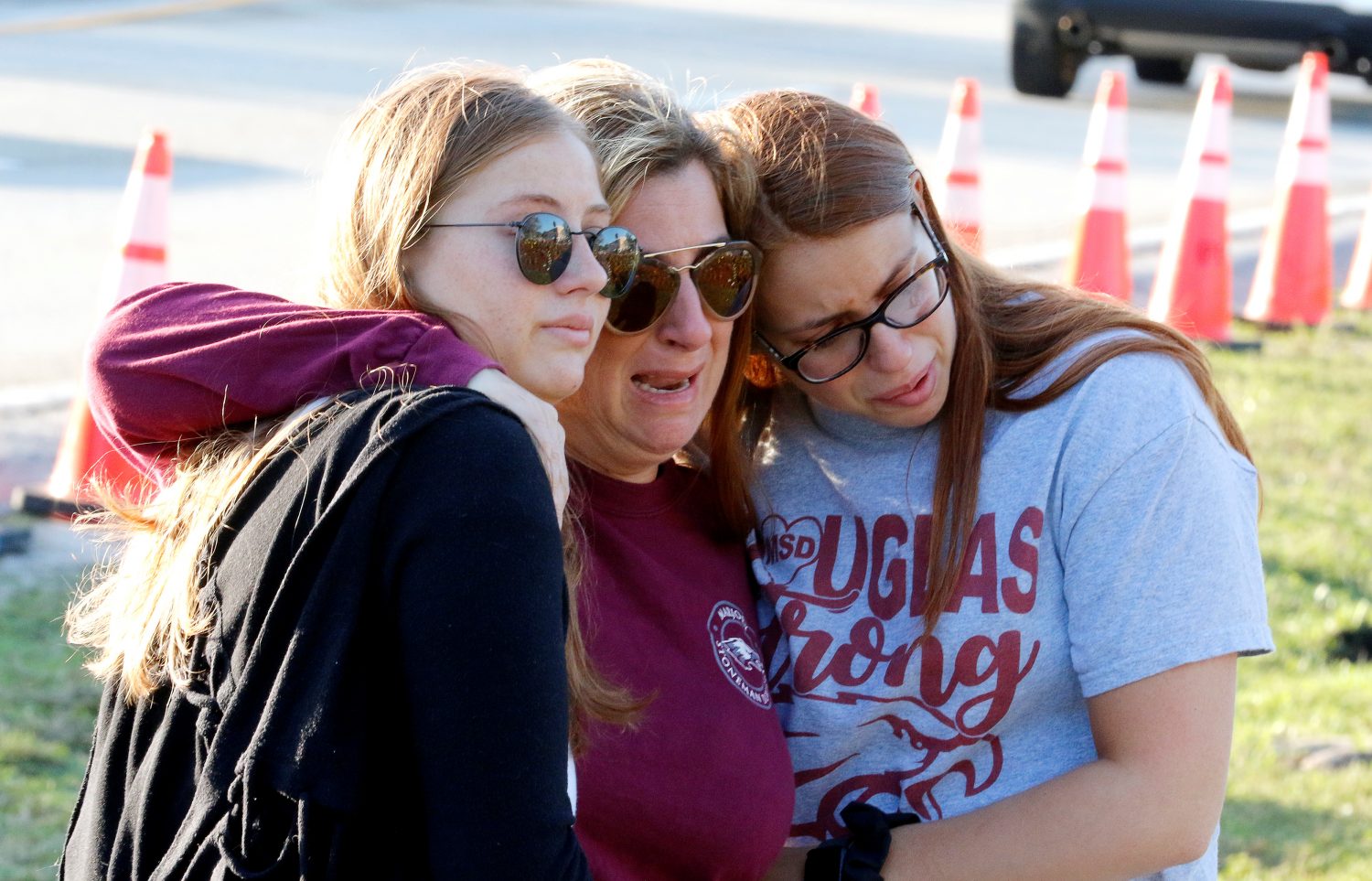 PARKLAND, Fla. (Reuters) – One year after the Valentine’s Day massacre inside a Florida school, students and families leading a nationwide push for school and gun safety paused on Thursday to mark the anniversary of the deadliest U.S. high school shooting.

School buses brought only a handful of students to a shortened class day at Marjory Stoneman Douglas High School in Parkland, Florida, where a former student with an assault gun killed 17 people on Feb. 14, 2018.

A moment of silence and community service activities took place at local schools, with the city of Parkland set to host an evening vigil at a park where a similar event the day after the shooting showcased angry grief and spurred calls for action.

Leaders of March for Our Lives, a national student movement formed in the aftermath of the Parkland tragedy to fight gun violence, said on Twitter that they were “going dark” for four days.

“During that time, if past trends continue, around 400 people in the U.S. will likely be shot to death,” they said.

From Washington to Florida’s state capital Tallahassee, elected leaders from both parties vowed to keep working to prevent another catastrophe. Republican President Donald Trump said on Twitter that the anniversary was a time to “recommit to ensuring the safety of all Americans, especially our nation’s children.”

“Why have we not been able to stop this from happening?” asked Jared Moskowitz, a former Democratic state legislator from the Parkland area, now heading the Florida Division of Emergency Management. He spoke alongside a 35-foot memorial to the shooting victims erected at a public arts display in Coral Springs, near Parkland.

A former student, Nikolas Cruz, is accused of opening fire with an AR-style semi-automatic rifle inside a freshman classroom building. He has offered to plead guilty if prosecutors do not seek the death penalty, but no such agreement has been reached.

Many families of the dead and many student activists prefer not to mention his name.

Students who did not want to attend school on Thursday were excused. Broward County Public Schools Superintendent Robert Runcie noted that many struggle with post-traumatic stress.

“For some it is almost as if the incident occurred yesterday. It’s raw and fresh for people,” he told reporters outside the high school, which was guarded by police officers.

For parent Fred Guttenberg, the year since the shooting already has seen his first Father’s Day, birthday and other emotional milestones without his 14-year-old daughter, Jaime, who was killed in a school hallway.

On the one-year mark of Jaime’s death, he was going to visit her at the cemetery. In a social media post, he noted that one year ago he had sent two children to school – and only one came home.

“I am forever haunted by my memory of that morning, rushing my kids out the door rather than getting one last minute. Did I say I love you?” he said on Twitter. 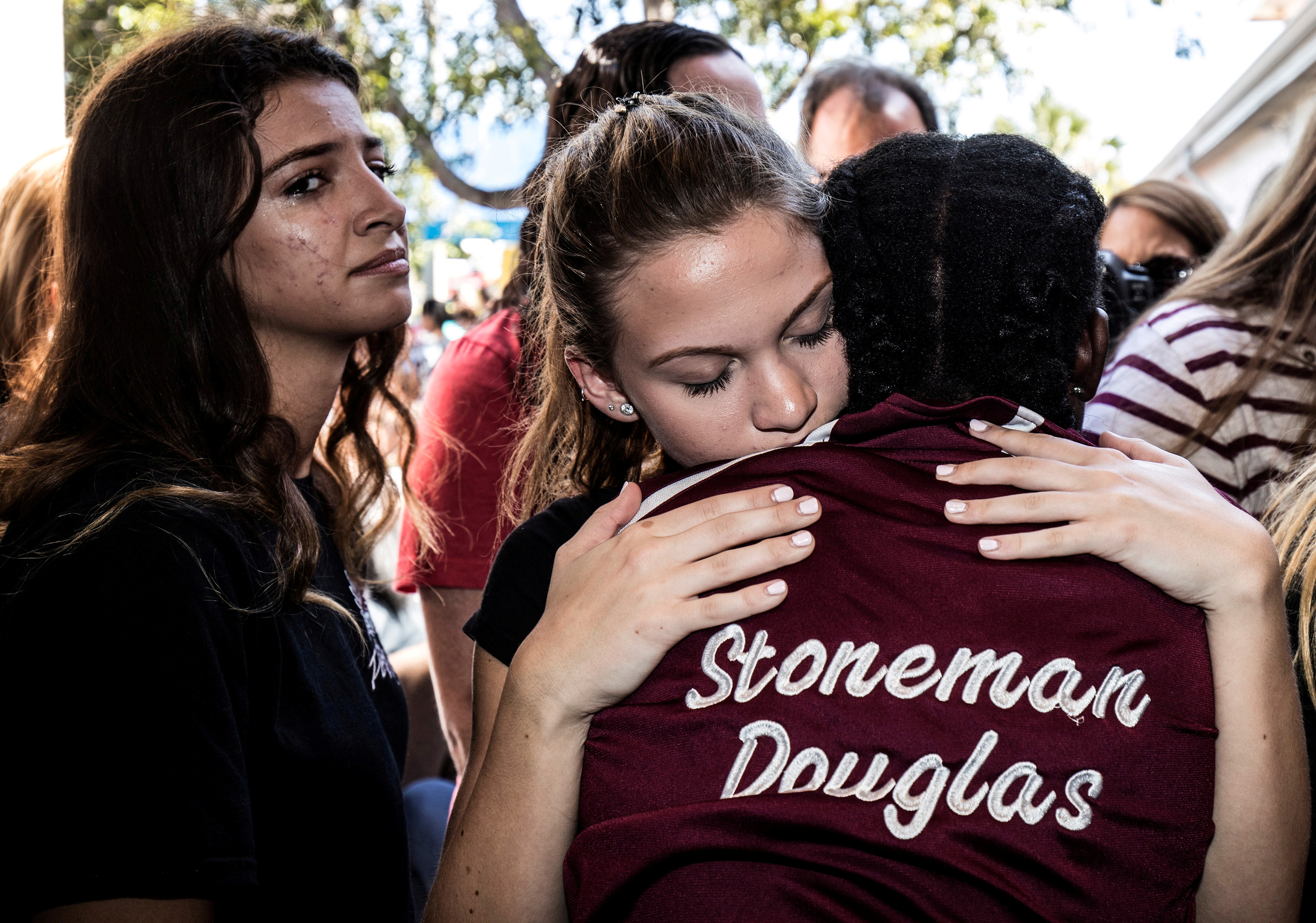 But as the Feb. 14 anniversary of the massacre that killed 17 people at Marjory Stoneman Douglas High School in Parkland approaches, students, teachers, parents and community leaders continue struggling to cope with the trauma. 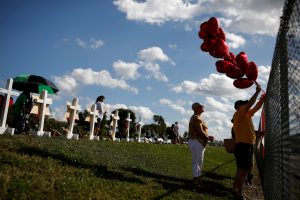 FILE PHOTO: Susan Glaser-Cohen (C) mourns while she stands between the fence of the Marjory Stoneman Douglas High School and crosses placed to commemorate the victims of a mass shooting in Parkland, Florida, U.S., February 18, 2018. REUTERS/Carlos Garcia Rawlins/File Photo

“There’s a lot of community angst, an overwhelming sadness and frustration because not much has changed in a year,” said Angela Burrafato, whose son graduated from the school last year.

Divides persist over where to put blame and how to prevent another tragedy.

Former Broward County Sheriff Scott Israel, criticized for the department’s handling of the shooting, was suspended last month by newly elected Florida Governor Ron DeSantis and is mounting a legal campaign to reclaim his job.

Some community members also are calling for the removal of Broward Schools Superintendent Robert Runcie.&nbsp;

The state’s Republican-led legislature swiftly passed gun control measures after the shooting, including raising the age requirement and setting a three-day waiting period for gun purchases. 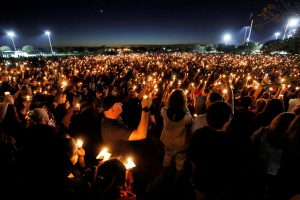 Critics argue the restrictions did not go far enough, while a Republican lawmaker from Florida’s Panhandle region filed a bill last month to roll back some of the measures.

The community will come together, however, at a variety of events to mark the shooting that took the lives of 14 students and three adults.

Therapy dogs will roam the high school’s halls on Feb. 14, and the school day will end early. Students who opt not to attend classes will be excused, while those who come to campus have been encouraged to volunteer for community service projects.

An evening interfaith vigil is planned for the same park where thousands gathered the day after the shooting. Nearby, a California-based artist is erecting a 35-foot-tall, wooden Temple of Time commemorating the victims.

It will be adorned with remembrances of the lives lost and will be razed a few weeks later, similar to the annual Burning Man festival in the Nevada desert.

Parkland Mayor Christine Hunschofsky said the anniversary is a painful reminder of all the city suffered, but the volunteerism helps prevent the shooting from defining it, she said.

“We still have people helping each other, and that’s who Parkland was before this, and who it is today,” she said.