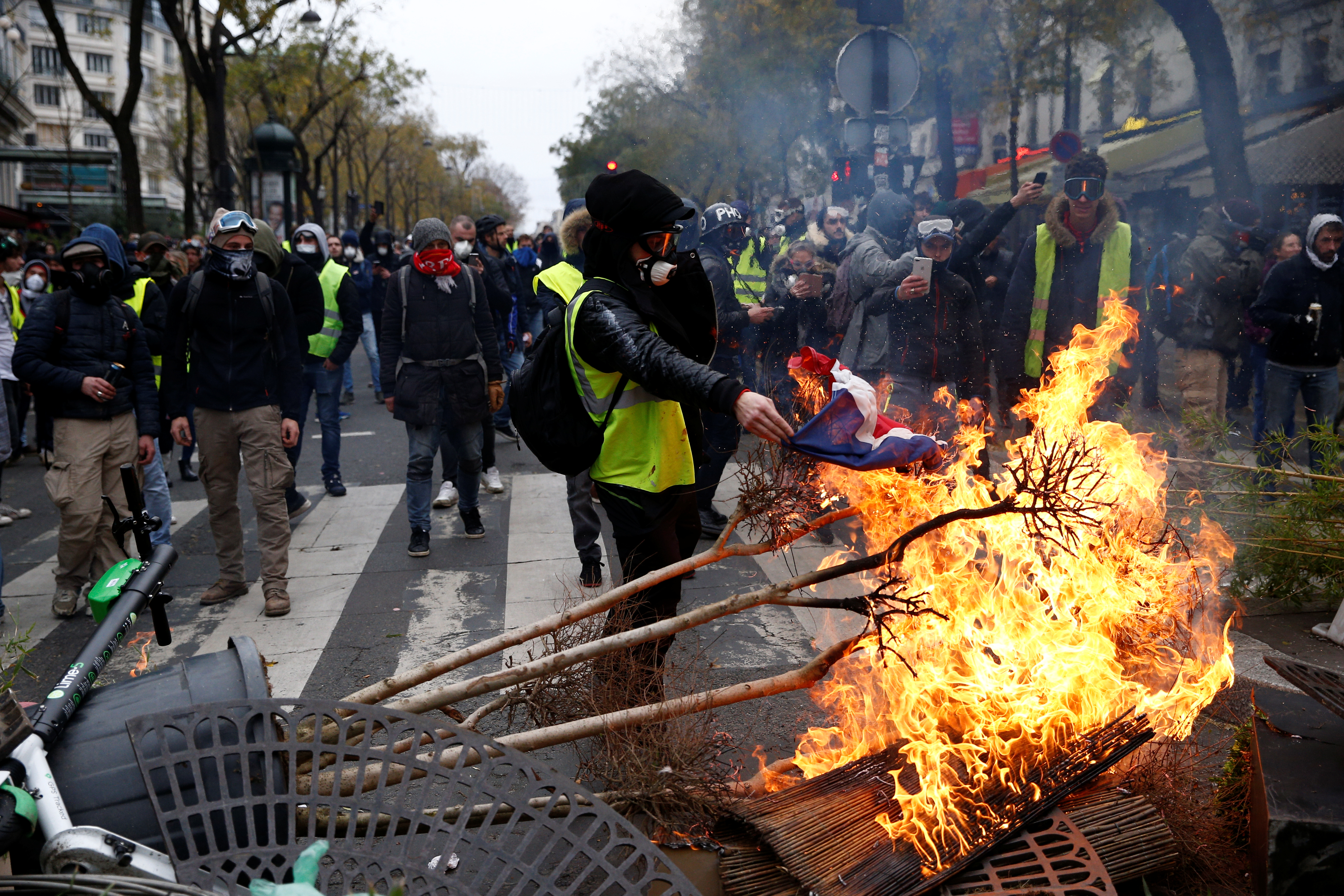 PARIS (Reuters) – Anti-government protesters faced off with French riot police in Paris on Saturday, hurling projectiles, torching cars and vandalizing shops and restaurants in a fourth weekend of unrest that has shaken President Emmanuel Macron’s authority.

Police used tear gas, water cannon and horses to charge protesters on roads fanning out from the Champs Elysees boulevard, but encountered less violence than a week ago, when the capital witnessed its worst unrest since the 1968 student riots. 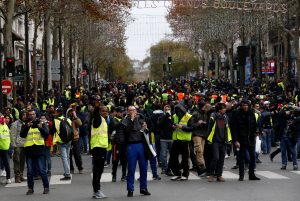 Protesters wearing yellow vests attend a demonstration on the Grands Boulevards as part a national day of protest by the “yellow vests” movement in Paris, France, December 8, 2018. REUTERS/Stephane Mahe

As night fell and many demonstrators started returning home, Interior Minister Christophe Castaner said there had been about 10,000 protesters in Paris by early evening and some 125,000 across the country.

Bordeaux, Lyon, Toulouse and other cities also saw major clashes between protesters and police on Saturday.

“The situation is now under control,” Castaner said at a joint news conference with Prime Minister Edouard Philippe.

He said about 120 demonstrators and nearly 20 police officers had been injured nationwide. Nearly 1,000 people had been arrested, 620 of them in Paris, after police found potential weapons such as hammers and baseball bats on them.

Philippe said police would remain vigilant through the night as some protesters continued to roam the city.

Groups of youths, many of them masked, continued skirmishing with police in the Place de la Republique area as some stores were looted.

Named after the fluorescent safety vests that French motorists must carry, the “yellow vest” protests erupted out of nowhere on Nov. 17, when nearly 300,000 demonstrators nationwide took to the streets to denounce high living costs and Macron’s liberal economic reforms.

Demonstrators say the reforms favor the wealthy and do nothing to help the poor and billed Saturday’s protest “Act IV” of their protest after three consecutive Saturdays of rioting.

The government this week canceled a planned rise in taxes on petrol and diesel in a bid to defuse the situation but the protests have morphed into a broader anti-Macron rebellion.

“Very sad day &amp; night in Paris,” U.S. President Donald Trump said in a Twitter message. “Maybe it’s time to end the ridiculous and extremely expensive Paris Agreement and return money back to the people in the form of lower taxes?” 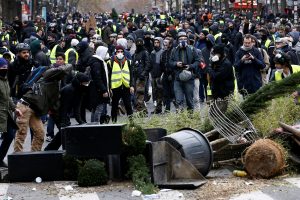 Protesters wearing yellow vests install a barricade during clashes with police at a demonstration during a national day of protest by the “yellow vests” movement in Paris, France, December 8, 2018. REUTERS/Stephane Mahe

The protests are jeopardizing a fragile economic recovery in France just as the Christmas holiday season kicks off.

Retailers have lost an estimated one billion euros in revenue since the protests erupted and shares in tourism-related shares saw their worst week in months.

Swathes of Paris’ affluent Right Bank north of the Seine river were locked down on Saturday, with luxury boutiques boarded up, department stores closed and restaurants and cafes shuttered. The Louvre, Eiffel Tower and the Paris Opera were also closed.

On the smashed front of one Starbucks cafe, vandals scrawled: “No fiscal justice, no social justice.”

The government had warned that far-right, anarchist and anti-capitalist groups would likely infiltrate protests and many of the skirmishes saw police tackling gangs of hooded youths, some of them covering their faces with masks.

“It feels like order is being better maintained this week,” Jean-Francois Barnaba, one of the yellow vests’ unofficial spokesmen, told Reuters.

“Last week the police were tear-gassing us indiscriminately. This time their actions are more targeted,” he added. 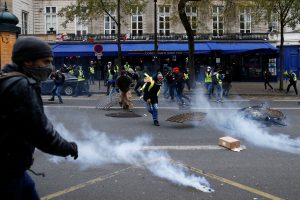 Tear gas fills the air during clashes with police at a demonstration during a national day of protest by the “yellow vests” movement in Paris, France, December 8, 2018. REUTERS/Stephane Mahe

The government this week offered concessions to soothe public anger, including scrapping next year’s planned hikes to fuel taxes in the first major U-turn of Macron’s presidency. It will cost the Treasury 4 billion euros ($4.5 billion).

“We want equality, we want to live, not survive,” said demonstrator Guillaume Le Grac, 28, who works in a slaughterhouse in Britanny.

Macron is expected to address the nation early next week to possibly further soften planned reforms and tax increases.