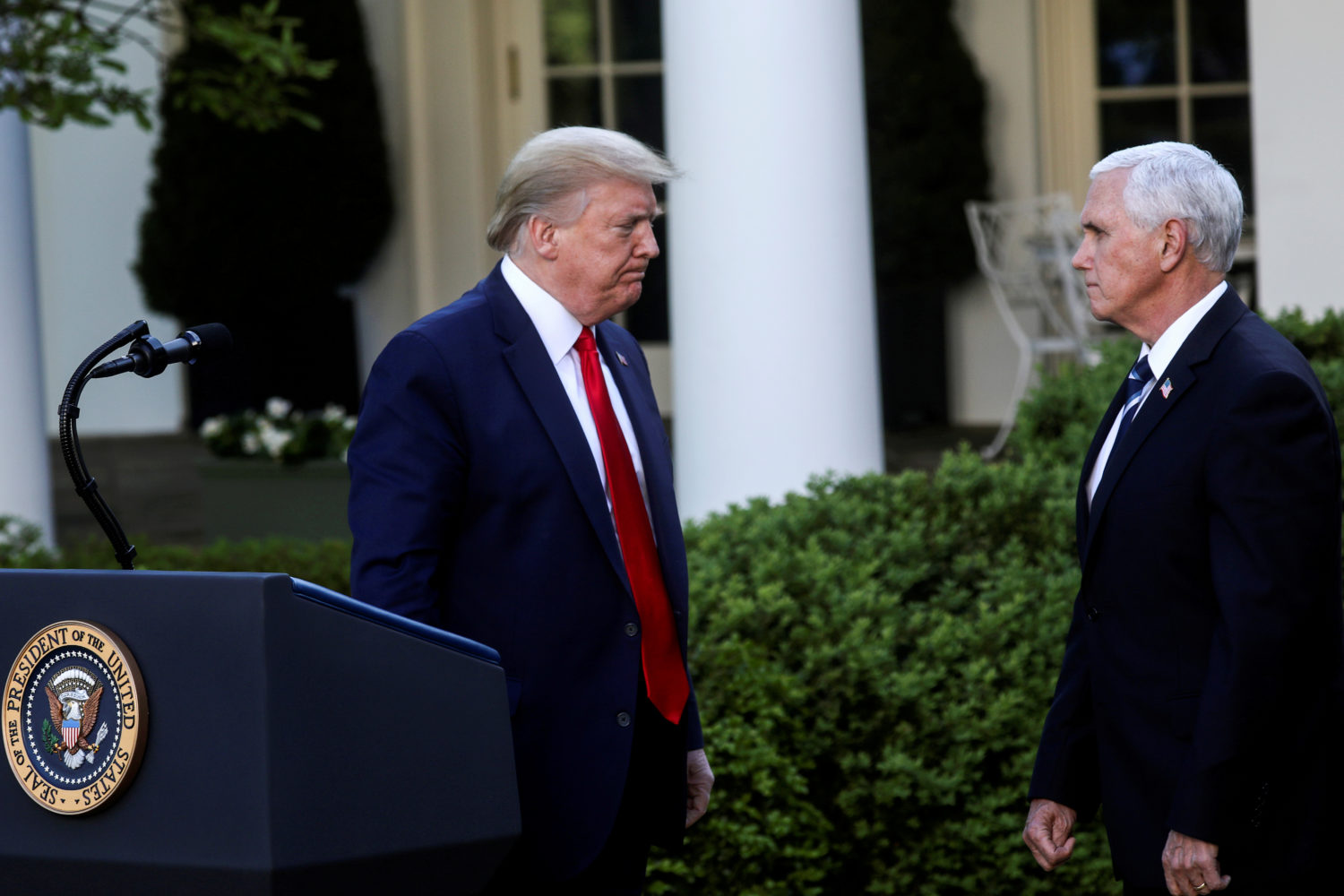 WASHINGTON (Reuters) – The Trump administration has no plans to keep President Donald Trump and Vice President Mike Pence apart, a person familiar with the matter said on Sunday, as concerns rise about the spread of the coronavirus within the White House.

The New York Times first reported the lack of plans to keep Trump and Pence separated despite concern they both could be incapacitated by the disease, citing two senior administration officials.

The White House did not respond to a request for comment.

Two coronavirus cases in the White House last week spurred fears of contagion for the president and vice president, who are leading the U.S. response to the pandemic, and who have both resumed travel and business schedules even as the U.S. death toll from the virus nears 80,000.

Pence’s press secretary, Katie Miller, the wife of Trump’s senior adviser, Stephen Miller, tested positive for the coronavirus a day after confirmation that Trump’s personal valet had been diagnosed with the disease.

White House Press Secretary Kayleigh McEnany sought on Friday to defend administration efforts to protect Trump and Pence, pointing to new measures taken by the White House including contact tracing and putting in place all guidelines recommended for essential workers.

The White House has also instituted daily coronavirus tests for Trump and Pence.

Anthony Fauci, a high-profile member of the White House coronavirus response team, Robert Redfield, director of the U.S. Centers for Disease Control and Prevention, and U.S. Food and Drug Administration Commissioner Stephen Hahn, were in self-quarantine on Saturday after coming into contact with someone who had tested positive for the disease.

If Republicans Trump and Pence were both to become incapacitated, Democratic House of Representatives Speaker Nancy Pelosi would assume presidential duties under U.S. law.

Last month, British Prime Minister Boris Johnson was admitted to an intensive care unit after becoming the first leader of a major power to announce he had tested positive for the highly contagious respiratory virus. Foreign Secretary Dominic Raab deputized for Johnson during his convalescence. 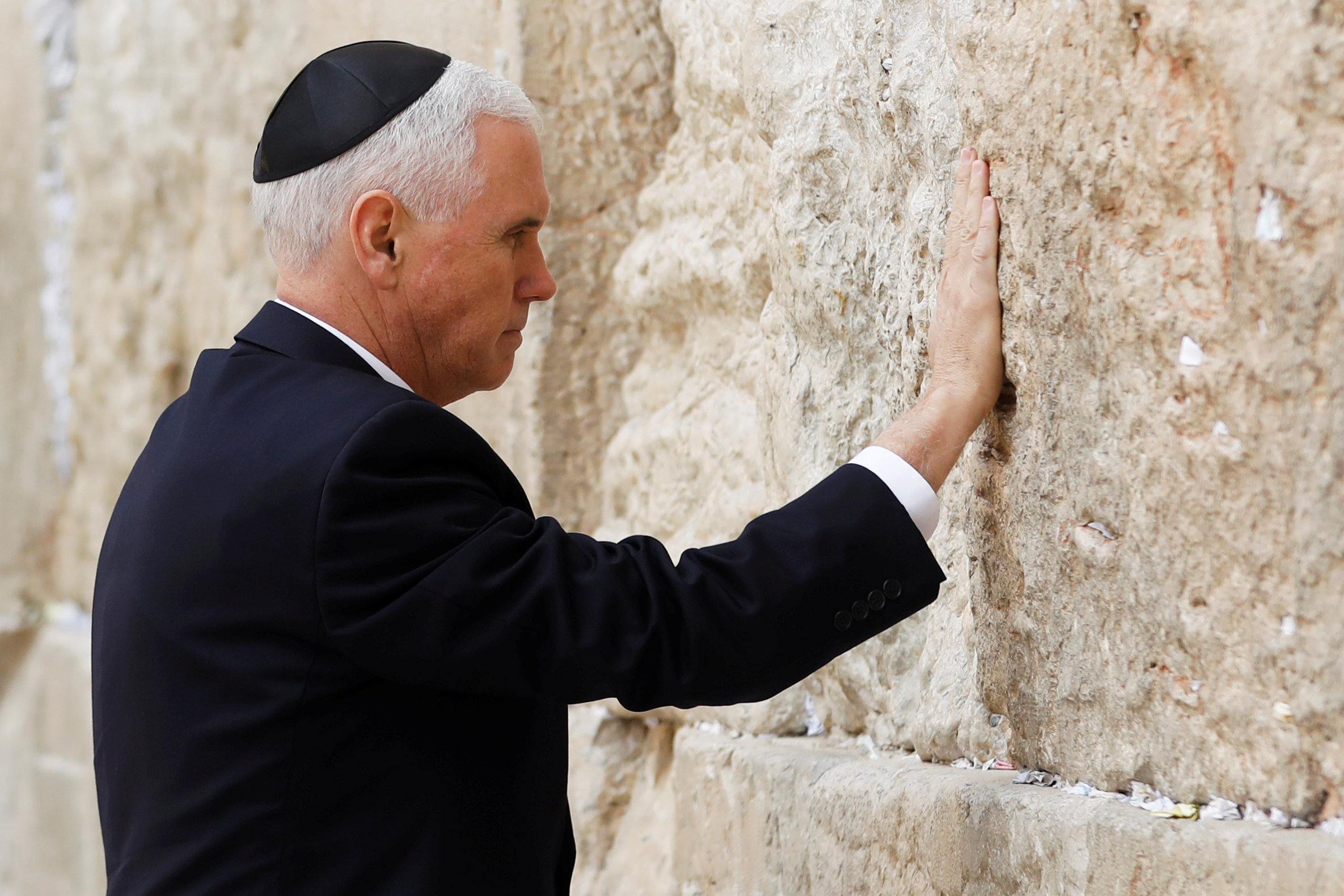 President Donald Trump’s advisers have been working on the outlines of a plan for some time. But Palestinians ruled out Washington as a peace broker after the U.S. president’s Dec. 6 recognition of Jerusalem as Israel’s capital.

“The White House has been working with our partners in the region to see if we can develop a framework for peace,” Pence told Reuters in an interview in Jerusalem on the last leg of a three-day Middle East trip. “It all just depends now on when the Palestinians are going to come back to the table.”

Trump’s Jerusalem move angered the Palestinians, sparked protests in the Middle East and raised concern among Western countries that it could further destabilize the region. Palestinians see East Jerusalem as capital of a future state.

A White House official told reporters he hoped the plan would be announced in 2018.

“It’ll come out both when it’s ready and when both sides are actually willing to engage on it,” said the White House official, speaking on condition of anonymity.

The official acknowledged that the United States and the Palestinian leadership had not had any direct diplomatic contact since Trump’s Jerusalem declaration.

Pence said in the interview that he and the president believed the decision, under which the United States also plans to move its embassy to Israel from Tel Aviv to Jerusalem, would improve peacemaking prospects.

Hanan Ashrawi, a senior official at the Palestine Liberation Organization (PLO), said the Trump administration had dealt a death blow to any prospect for peace.

“The extremist positions of this U.S. administration and the biblical messianic message of Pence not only disqualified the U.S. as a peace broker but created conditions of volatility and instability in the region and beyond,” Ashrawi said in the West Bank city of Ramallah.

Pence discussed the Jerusalem issue during talks with Egypt’s President Abdel Fattah al-Sisi on Saturday and Jordan’s King Abdullah on Sunday. He said the two leaders had agreed to convey to the Palestinians that the United States was eager to resume peace talks.

“We want them (the Palestinians) to know the door is open. We understand they’re unhappy with that decision but the president wanted me to convey our willingness and desire to be a part of the peace process going forward,” Pence said.

Asked if the Egyptians and Jordanians had agreed to pressure the Palestinians to return to talks, Pence said: “I wouldn’t characterize it as that.”

The Palestinians want to establish an independent state in the Israeli-occupied West Bank and in the Gaza Strip with East Jerusalem as its capital.

Israel captured East Jerusalem in the 1967 Middle East war and annexed it in a move not recognized internationally. It says the entire city is its eternal and indivisible capital.

Pence said the U.S. State Department would spell out details in the coming weeks about a plan to move the U.S. embassy to Jerusalem by the end of 2019.

Israeli media have speculated that a 2019 embassy move could help Israeli Prime Minister Benjamin Netanyahu win reelection in a vote scheduled for November of that year.

Pence said he admired Netanyahu’s leadership and appreciated his friendship. Asked if he hoped for the prime minister’s reelection, Pence said: “I’m a strong supporter of Benjamin Netanyahu, but I don’t get a vote here.”

Pence toured Israel’s Yad Vashem Holocaust memorial with Netanyahu on Tuesday before visiting the Western Wall, one of Judaism’s holiest sites. He stood solemnly with his hand on the wall and left a note, as people who pray there traditionally do.

Asked if he thought the United States would succeed in getting that kind of agreement with its European allies, Pence said: “We’ll see.”

Trump said earlier this month the United States would withdraw from the agreement unless its flaws were fixed. 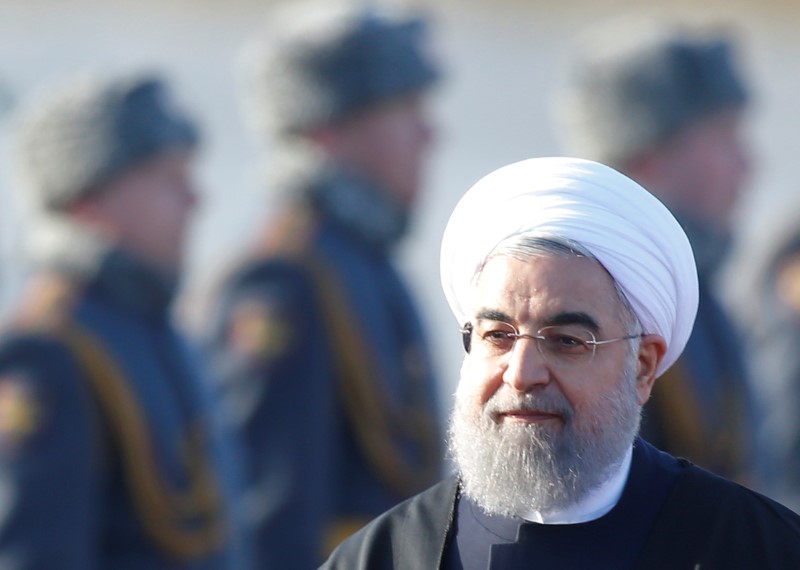 TEHRAN (Reuters) – Iran’s president must get a second term to secure the economic benefits that he promised would result from a diplomatic thaw with the West, Vice President Masoumeh Ebtekar said ahead of a May 19 election.

Hassan Rouhani’s hardline challengers for the presidency, some of whom are close to supreme leader Ayatollah Ali Khamenei, say he traded away too much in a 2015 deal with world powers that limited Iran’s nuclear work but failed to deliver sufficient rewards.

In a rare interview with a trio of foreign reporters at an EU-Iran business forum on Sunday, Ebtekar, one of Iran’s 12 vice presidents, said voters should not give up on Rouhani.

“He needs more time … He has to be given a chance to be able to continue his program,” said Ebtekar, one of Iran’s most prominent women politicians.

“Rouhani has done a lot to overcome some of the hurdles that the investors find when they are coming,” she said in a nod to concerns over red tape and opaque rules voiced by foreign companies that Iran hopes to attract.

As a young woman, Ebtekar was the face of the radical students who occupied the U.S. Embassy and held its staff hostage for 444 days at the time of the 1979 Islamic revolution.

Known as “Mary”, she spoke in calm, fluent English to the world’s media, putting the hostage-takers’ side of the incident that remains a painful memory for the United States and is one of the reasons Washington considers the Islamic Republic a pariah state.

At 56, she is now firmly in the reformist camp, endorsing Rouhani’s vision of a freer society and diplomatic detente after the lifting of sanctions under the deal he engineered.

If hardliners describe the nuclear deal as a limited engagement with the West on a single issue, Ebtekar sees it as the beginning of a new era of international engagement to realize what she says are the hopes of Iran’s younger generation to end its long isolation.

“There is a lot being done which is creating a lot of hope and optimism but at the same time the expectations for the nuclear deal are still very high,” said Ebtekar, her smiling face framed by a traditional black chador over a turquoise scarf.

With unilateral U.S. sanctions still in place, Ebtekar said voters understood that it was not Rouhani’s fault that the nuclear deal had yet to improve their daily lives.

“They understand that mostly the problem is coming from outside. Our government has done its share … now it is up to our partners in the deal to do their share as well.

“This opening up will create a better atmosphere, and I hope that they will – particularly countries like the United States – will stand up to their commitments,” Ebtekar said.

Ayatollah Khamenei’s scepticism over Rouhani’s detente policy is echoed by his strongest challenger, Ebrahim Raisi, a hardline cleric seen as a possible future supreme leader, who says Iran has no need of foreign help.

Ebtekar, however, said the election is Rouhani’s to lose, pointing to parliamentary polls in which the conservatives lost ground. The alliance of moderates and reformists that helped carry him to power in 2013, she said, “gives him a very strong position.”

Ebtekar rejected the view of Western and Gulf Arab states that Iran is an aggressor in the Middle East, saying it has peaceful intentions but also had the right to defend itself from foreign threats.

Iran’s backing of Syrian President Bashar al-Assad, the militant Lebanese group Hezbollah and alleged support for Yemen’s Houthi fighters has put it at odds with the United States and regional rival Saudi Arabia.

“We are looking forward to play our role to promote peace and also security in the region,” Ebtekar said.

“But it’s natural for the people living in this region to defend themselves, it’s very natural for Lebanon to defend itself, Syria, the Palestinians. So defense is another issue.”

“It has become difficult for me to continue bearing responsibility for decisions that I do not agree with and whose consequences I fear,” ElBaradei said in his resignation letter. “I cannot bear the responsibility for one drop of blood.” END_OF_DOCUMENT_TOKEN_TO_BE_REPLACED