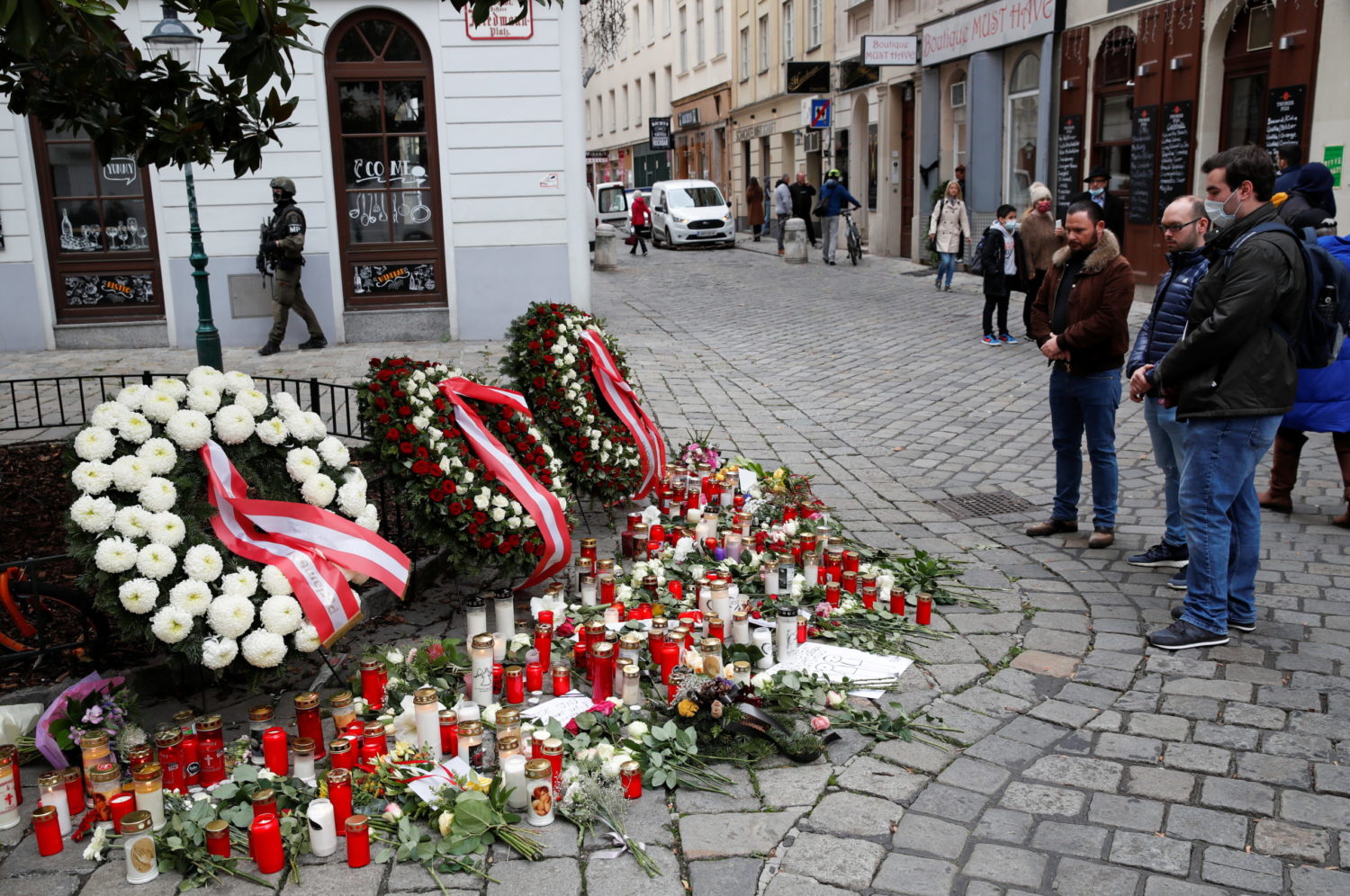 VIENNA (Reuters) – Large quantities of mobile phone footage have confirmed that the jihadist who killed four people in a rampage in Vienna on Monday was the only gunman, but Austria fumbled intelligence on him, Interior Minister Karl Nehammer said on Wednesday.

Austria arrested 14 people aged 18 to 28 on Tuesday in connection with the attack and is investigating them on suspicion of belonging to a terrorist organization, he said. But it would also have to investigate its own actions, he added.

“Before the terror attack began, according to the information currently available, some things also went wrong,” Nehammer told a news conference.

In July, neighboring Slovakia’s intelligence service had handed over information suggesting the attacker had tried and failed to buy ammunition there, Nehammer and a top ministry official, Director General for Public Security Franz Ruf, said.

“In the next steps evidently something went wrong here with communications,” said Nehammer, who called for the formation of an independent commission to examine the errors made.

After receiving the tip-off from Slovakia, Austria’s domestic intelligence agencies at the federal and provincial level made the necessary checks and sent questions back to Bratislava, Ruf said.

“It’s up to the commission to clarify whether the process went optimally and in line with the law,” he said when pressed on what had gone wrong.

The gunman, who was shot dead by police within minutes of opening fire on crowded bars on Monday evening, was a 20-year-old with dual Austrian and North Macedonian citizenship. Born and raised in Vienna, he had already been convicted of trying to reach Syria to join Islamic State and had spent time in jail.

All of those arrested in Austria have a “migration background”, Nehammer said. Vienna police chief Gerhard Puerstl added that some were dual citizens of Bangladesh, North Macedonia, Turkey or Russia.

Neutral Austria, part of the U.S.-led Global Coalition to Defeat ISIS formed in 2014, has for years seen jihadist attacks as its biggest security threat and warned of the danger posed by foreign fighters returning from Iraq or Syria or their admirers.

At the end of 2018, the authorities knew of 320 people from Austria who were actively involved or had wanted to participate in jihad in Syria and Iraq. Of these, around 58 people were thought to have died in the region and 93 to have returned to Austria. Another 62 were prevented from leaving the country.

Nehammer repeated criticism of a deradicalization program, saying the gunman had “perfectly” fooled the program to reintegrate jihadists into society.

Members of the public had handed in more than 20,000 mobile phone videos that the authorities analyzed before coming to the conclusion that there was only one gunman, Nehammer said, putting an end to lingering confusion on that point.

Switzerland has also arrested two men in connection with the attack. Its justice minister said the two were “obviously friends” with the gunman.

Ruf said Austria was in contact with Switzerland and another country that he declined to identify over the investigation.

North Macedonia said on Tuesday three people were somehow involved in the attack and all had dual Austrian and North Macedonian citizenship. It identified them only by initials.

Monday’s attack drew international expressions of support for Austria, which had been spared the deadly militant attacks that have hit other European countries in the past decade.

President Emmanuel Macron of France, which has suffered two deadly attacks recently amid Islamist anger over the publication of satirical caricatures of the Prophet Mohammad, will visit Vienna next Monday, Chancellor Sebastian Kurz’s office said.