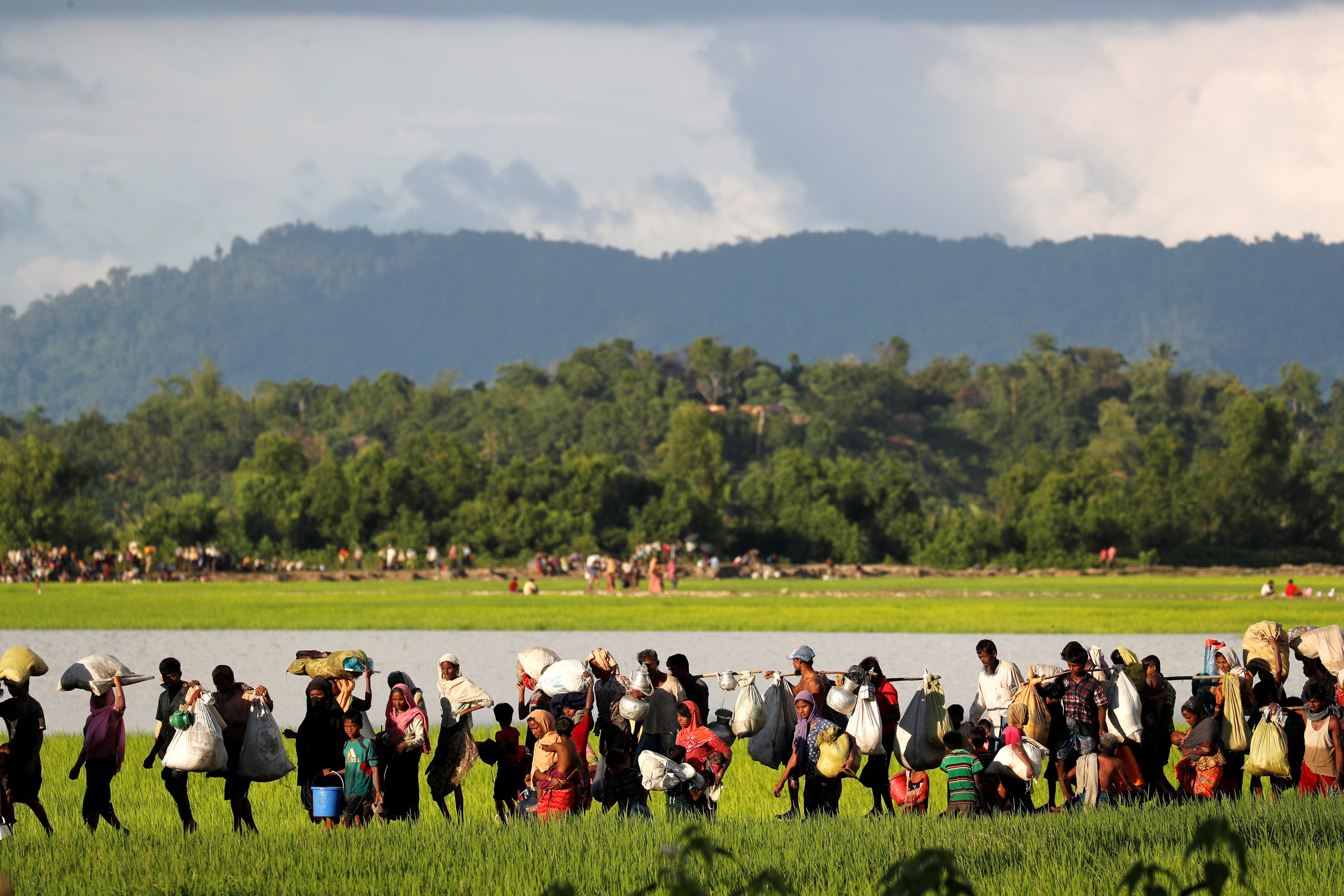 By Tom Allard and Nurul Islam

COX’S BAZAR, Bangladesh (Reuters) – Thousands of Rohingya Muslims from Myanmar fled to Bangladesh on Monday in a new surge of refugees driven by fears of starvation and violence the United Nations has denounced as ethnic cleansing.

Reuters reporters on the Bangladeshi side of the border, in Palong Khali district, saw several thousand people crossing from Myanmar’s Rakhine state, filing along embankments between flooded fields and scrubby forest.

“Half of my village was burnt down. I saw them do it,” said Sayed Azin, 46, who said he had walked for eight days carrying his 80-year-old mother in a basket strung on a bamboo pole between him and his son.

Soldiers and Buddhist mobs had torched his village, he said.

“I left everything,” he said, sobbing. “I can’t find my relatives … I can’t take this any more.”

Some new arrivals spoke of bloody attacks by Buddhist mobs on people trekking toward the border. 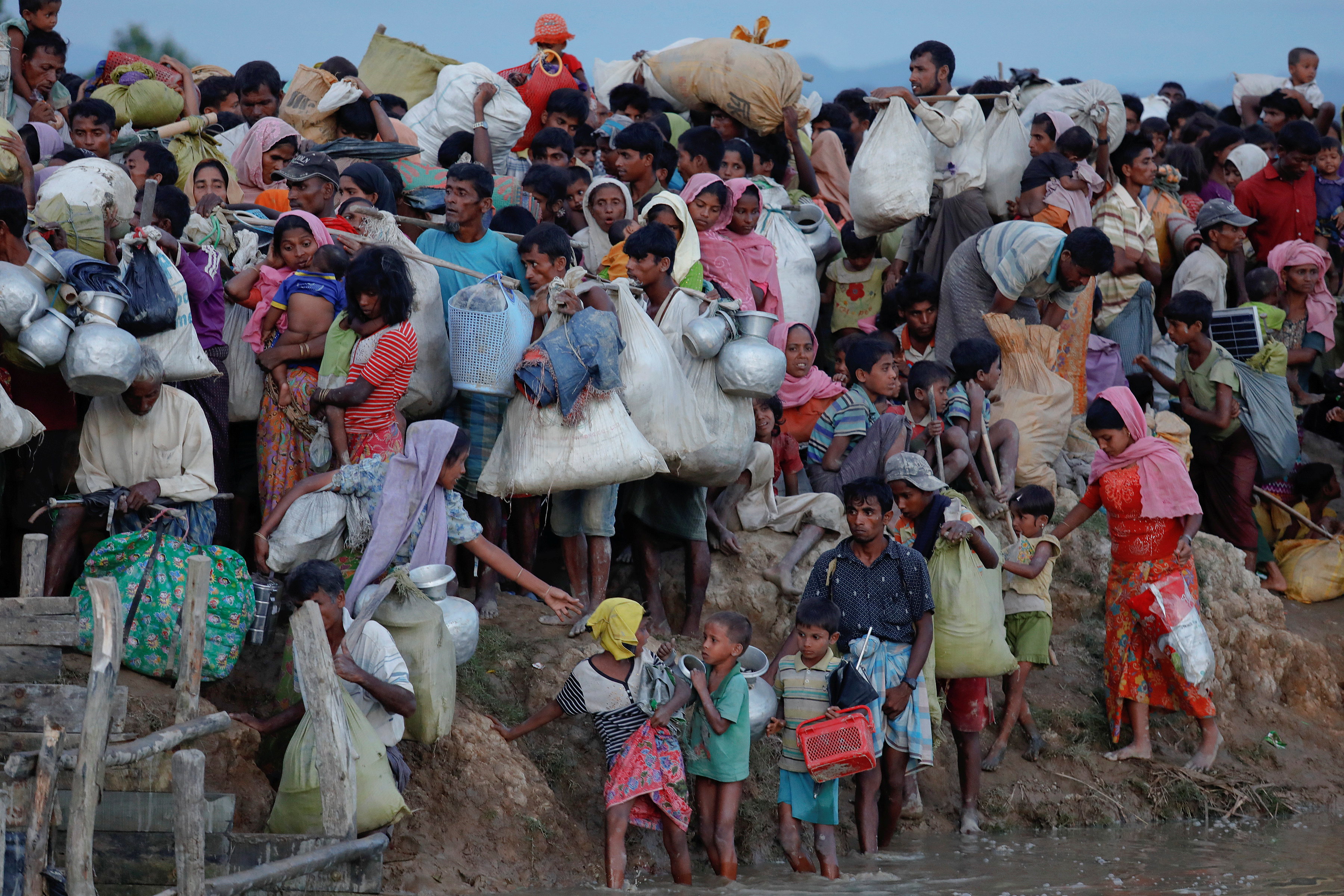 Rohingya refugees who fled from Myanmar make their way through the rice field after crossing the border in Palang Khali, Bangladesh October 9, 2017. REUTERS/Damir Sagolj

About 519,000 Rohingya have fled Myanmar since Aug. 25, when attacks by Rohingya militants on security posts in Rakhine sparked a ferocious military response.

Refugees and rights groups say the army and Buddhist vigilantes have engaged in a campaign of killing and arson aimed at driving the Rohingya out of Myanmar.

Myanmar rejects accusations of ethnic cleansing and has labeled the militants from the Arakan Rohingya Salvation Army who launched the initial attacks as terrorists who have killed civilians and burnt villages.

Among those fleeing were up to 35 people on a boat that capsized off the Bangladesh coast on Sunday. At least 12 of them drowned while 13 were rescued, Bangladeshi police said.

“We faced so many difficulties, for food and survival,” Sayed Hossein, 30, told Reuters, adding that his wife, three children, mother and father in law had drowned.

“We came here to save our lives.”

The Myanmar government has said its “clearance operations” against the militants ended in early September and people had no reason to flee. But in recent days the government has reported large numbers of Muslims preparing to leave, with more than 17,000 people in one area alone.

The government cited worries about food and security as their reasons.

Some villagers in Rakhine said food was running out because rice in the fields was not ready for harvest and the state government had closed village markets and restricted the transport of food, apparently to cut supplies to the militants.

“The situation’s getting worse. We have no food and no guarantee of security,” said a Rohingya resident of Hsin Hnin Pyar village on the south of the state’s Buthidaung district.

He said a lot of people were preparing to flee.

“While the Myanmar military has engaged in a campaign of violence, there is mounting evidence that Rohingya women, men and children are now also fleeing the very real threat of starvation,” rights group Amnesty International said.

Senior state government official Kyaw Swar Tun declined to go into details when asked about the food, except to ask, “Have you heard of anyone dying of hunger in Buthidaung?”

The reports of food shortages will add to the urgency of calls by aid agencies and the international community for unfettered humanitarian access to the conflict zone.

The insurgents declared a one-month ceasefire from Sept. 10 to enable the delivery of aid but the government rebuffed them, saying it did not negotiate with terrorists.

The ceasefire is due to end at midnight on Monday but the insurgents said in a statement they were ready to respond to any peace move by the government.

The ability of the group to mount any sort of challenge to the army is not known, but it does not appear to have been able to put up resistance to the latest military offensive. 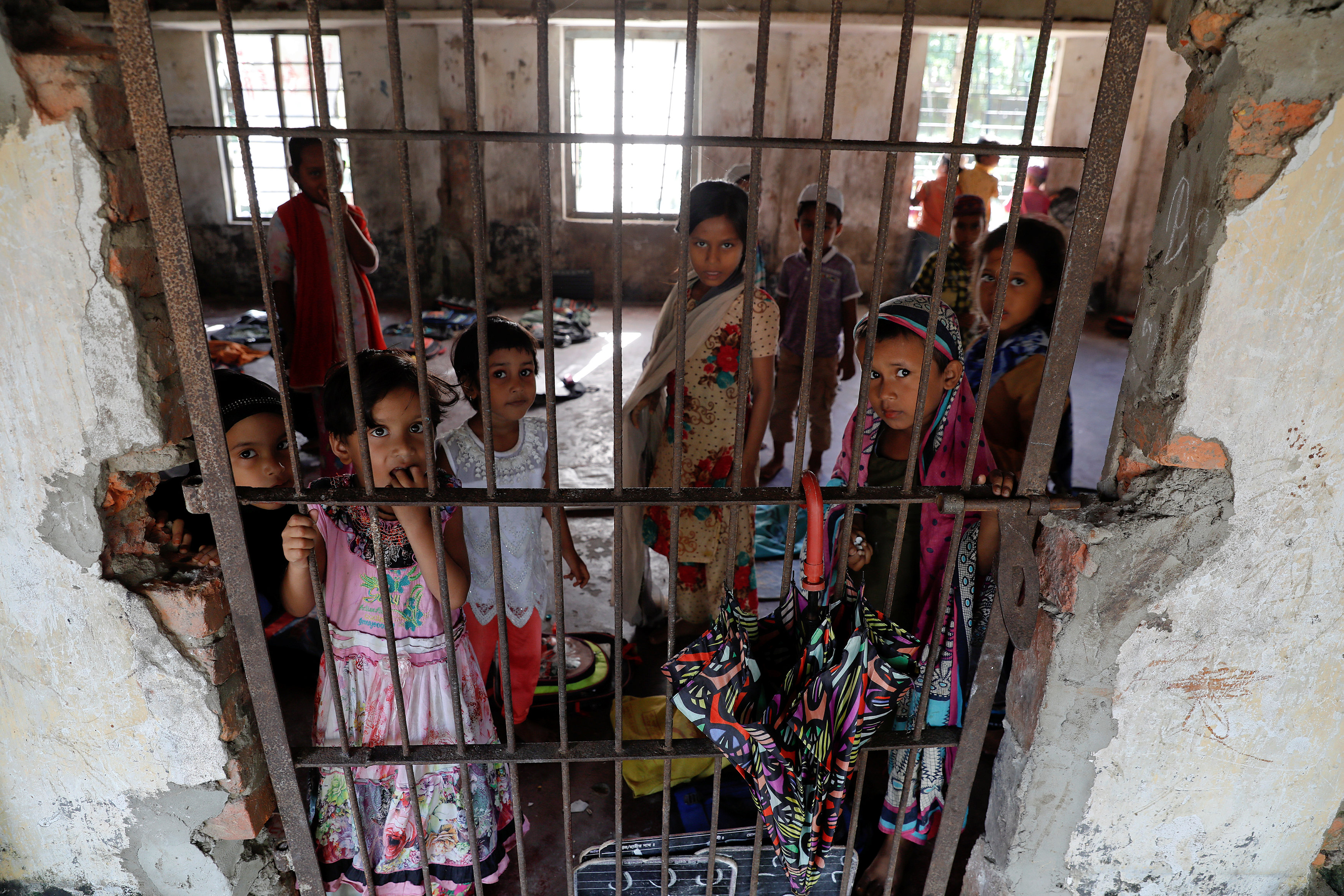 Students of a local madrasa watch from inside their classroom as bodies of Rohingya refugees from Myanmar, who were killed when their boat capsized on the way to Bangladesh, are brought to their school in Shah Porir Dwip, in Teknaf, near Cox’s Bazar in Bangladesh, October 9, 2017. REUTERS/Damir Sagolj

Bangladesh was already home to 400,000 Rohingya who had fled earlier bouts of violence.

Mostly Buddhist Myanmar does not recognize the Rohingya as citizens, even though many have lived there for generations.

But even as refugees arrive, Bangladesh insists they will all have to go home. Myanmar has responded by saying it will take back those who can be verified as genuine refugees.

Many Rohingya fear they will not be able to prove their right to return.

Myanmar leader and Nobel peace laureate Aung San Suu Kyi has faced scathing international criticism for not doing more to stop the violence, although she has no power over the security forces under a military-drafted constitution.

The United States and Britain have warned Myanmar the crisis is putting at risk the progress it has made since the military began to loosen its grip on power in 2011.