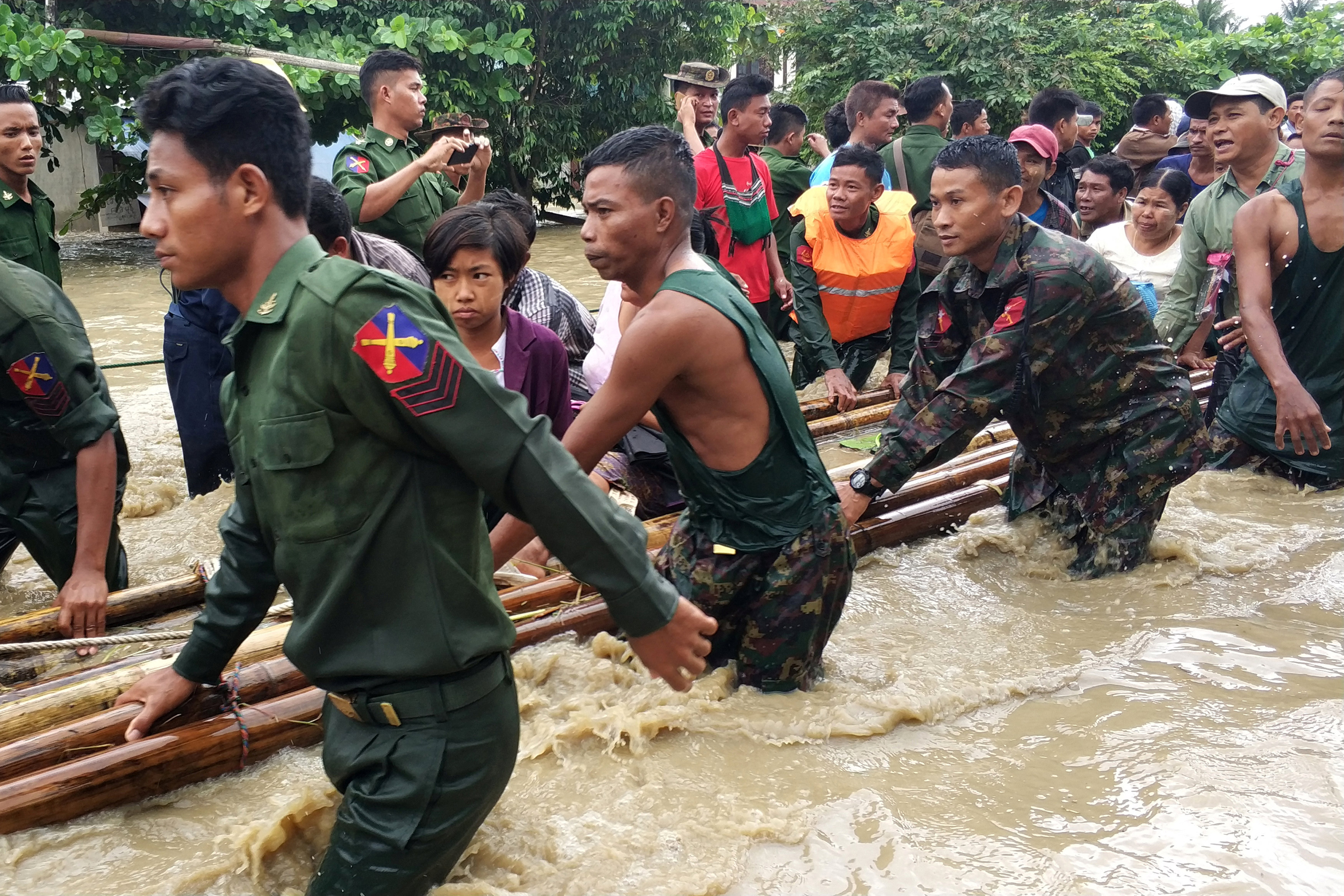 By Antoni Slodkowski and Shoon Naing

IN KYIN KONE, Myanmar (Reuters) – More than 50,000 people have evacuated their homes in central Myanmar after part of a dam failed on Wednesday, inundating communities and damaging a bridge on a major highway, officials said.

The incident spotlights safety concerns about dams in Southeast Asia following last month’s collapse of a hydroelectric dam in neighbouring Laos that displaced thousands of people and killed at least 27.

Myanmar fire authorities sent a team to the dam after the breach at 5:30 a.m. (2300 GMT) unleashed water into the nearby town of Swar and several other settlements.

“The (spillway) of the dam was broken and flooded the two villages close to the highway,” the fire department said on its Facebook page.

Authorities had given the dam the all-clear after an inspection just days earlier, despite residents’ concerns about overspill, state-run media said.

“If you go to my house, there are no belongings left,” said farmer Aung Aung, whose village of Kone Gyi Lan Sone was inundated without warning, sending him scrambling to tell his neighbours. They all ran to higher ground to escape.

“It was only after that we realised the situation,” he told Reuters. “The little shop over there is completely destroyed and washed away,” he added, as floodwaters and broken branches swirled around the wooden homes in the village.

Many people, including some not directly hit by flooding, had decided to leave their homes for fear the waters could rise further, said an official of the Natural Disaster Management Department who sought anonymity, in the absence of authorisation to speak to media.

As many as 14 clusters of hamlets were battling flooding, the department said.

In all, 12,000 households, or a total of 54,000 people, were displaced, said another official, from the Department of Relief and Resettlement, who also declined to be named.

A surge of water as high as 8 feet (2.4 m) hit the first downstream village of Kyun Taw Su, besides flooding Swar and part of the larger town of Yedashe, said Ko Lwin, a journalist based in Swar.

A Yedashe administrative official said authorities could not rule out that people were still trapped in small villages near the dam, adding that of three people reported missing and feared swept away by the waters, one was found alive.

“The two other people are still missing,” said the official, Aye Myin Kyi. “We don’t assume them dead, we are still looking for them.”

About 7,000 people were staying in 17 camps in the town, she added, while 16 more held 3,500 people in Taungoo, the nearest major town, with still more in monasteries and elsewhere.

Pictures on social media showed soldiers using makeshift bamboo rafts and kayaks to evacuate people from flooded homes and shops, some carrying children and the elderly through knee-deep waters. 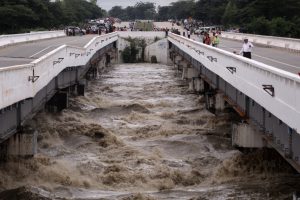 The waters had begun to subside on Wednesday afternoon but still rushed beneath a damaged bridge along the road linking Myanmar’s major cities of Yangon, Mandalay and the capital Naypyitaw surrounded by acres of flooded fields.

The bridge stayed closed to heavy traffic as the carriageway for vehicles travelling north to south had buckled.

“When the water flooded the bridge we closed it, and by the time we arrived here around 8 a.m., two columns had sunk around two feet,” said Deputy Minister of Construction Kyaw Linn, who joined in repair work by surveyors and workers.

Myanmar’s heavy annual monsoon rains have caused widespread flooding that displaced more than 100,000 people and killed at least 11 in July.

Some dams were reported to be overflowing this month, but an irrigation and water management official told the privately-run Myanmar Times newspaper there was no risk of a collapse.

The dam built across the Swar creek in 2004 can hold 216,350 acre-feet of water to irrigate more than 20,000 acres (8,100 hectares) of farmland, says a Ministry of Agriculture and Irrigation document posted online.

Swar residents had expressed concerns that the dam was overflowing, said Ko Lwin, the journalist.

On Monday, the state-run Myanmar Alin newspaper said an administrator and an irrigation official had inspected the dam.

“There is nothing to be concerned about,” it reported the administrator, Tun Nay Aung, as saying, as the dam had not exceeded its capacity.

Reuters was unable to trace contact details for Tun Nay Aung on Wednesday. Government spokesman Zaw Htay did not answer telephone calls from Reuters to seek comment regarding the prior concerns over the dam.

The Myanmar government is assessing some dam projects to help eliminate chronic power shortages, but their potential environmental impact makes the projects controversial.

Large areas were still cut off by the floods, said Aye Aye, 47, one of the relief providers in the Swar area.

“I don’t know about all the people,” she added. “But there were quite a lot of dogs. Motorcycles were also underwater. (We saw) dead buffaloes, dead cows.”