KANSAS CITY, Kan. (Reuters) – A trial over a Kansas law critics call illegal that requires proof of U.S citizenship from people registering to vote is set to begin on Tuesday.

The lawsuit, filed in February 2016 in the U.S. District Court in Kansas City, Kansas by the American Civil Liberties Union (ACLU), argues that the state law violates the National Voter Registration Act by requiring voters who do not have a driver’s license to show documents like a birth certificate or U.S. passport for voter registration. It is one of numerous voter ID laws passed by Republican-led state legislatures in recent years.

Democrats have argued that ID laws target voters who typically support the Democratic Party, such as the young and minorities. Proponents of the measures have said they are intended to prevent voter fraud.

Each side in the case will present opening statements on Tuesday, followed by an expected five or more days of testimony. U.S. District Judge Julie Robinson will hear the case.

In May 2016, Robinson temporarily blocked enforcement of the law pending outcome of the trial. The law first went into effect Jan. 1, 2013.

The chief defendant in the case, Kansas Secretary of State Kris Kobach, has said the law is intended to prevent voter fraud.

A lawyer and candidate for Kansas governor, Kobach has said a lack of required documentation could allow thousands of non-Americans to vote in Kansas, potentially canceling out the votes of citizens. Kobach will serve as lead lawyer for the state.

Kobach, a Republican, served on a commission appointed by U.S. President Donald Trump to investigate voter fraud. Trump contended that millions of people voted illegally in the 2016 presidential election that he won. The commission was shut down in January.

Lawmakers in 23 states have imposed new voting restrictions since 2010, according to the Brennan Center for Justice at New York University School of Law. 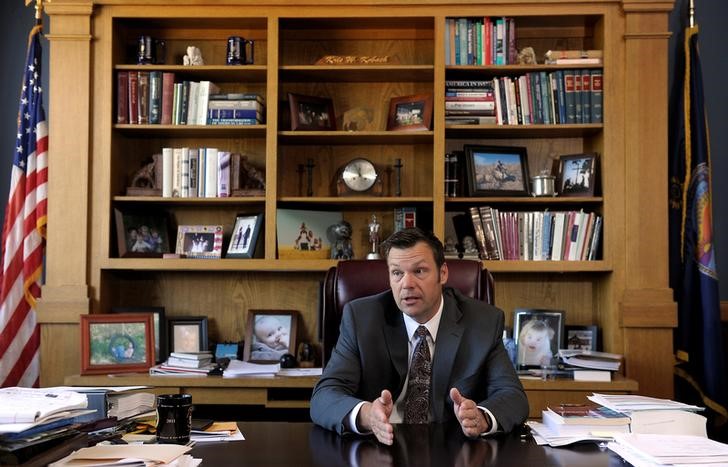 (Recasts to show that judge has canceled contempt of court hearing scheduled for Friday, adds comment by Kansas secretary of state)

Sept 29 (Reuters) – The Kansas Secretary of State and the American Civil Liberties Union (ACLU) have reached a temporary agreement over the state’s voter registration laws, keeping Kansas’ chief elections officer from a contempt of court hearing, according to court documents filed on Thursday.

The deal between Secretary of State Kris Kobach and the ACLU comes six weeks before the U.S. presidential election.

The two sides have been at odds over a Kansas law requiring people to prove American citizenship if they want to register to vote while applying for a driver’s license. Critics say this requirement disenfranchises voters, especially minorities.

The deal will allow people who registered at motor vehicle offices or with a federal form without providing citizenship documents to vote in the Nov. 8 election with a standard ballot, rather than be forced to use a provisional one, the ACLU and Kobach said in a status report filed on Thursday.

Robinson had ordered Kobach, a Republican, to explain by Thursday why he should not be held in contempt for failing to obey a federal order issued in May.

That order required him to register people who applied to vote at motor vehicle offices or with a federal form without proof of citizenship.

Robinson canceled the contempt hearing scheduled for Friday, according to her own court filing, citing the ACLU and Kobach’s agreement.

“Our case is ongoing, but this interim agreement is a critical victory for Kansans who want to vote in the November election. It is a shame that voters had to fight so hard to get Kris Kobach to do his job,” ACLU attorney Orion Danjuma said in a statement.

Kobach said he was pleased an agreement had been reached, but criticized the ACLU.

“The ACLU’s argument was weak at best. However, at this point the preparations for the November 8, 2016, general election must proceed with rules established to ensure the efficient administration of the election,” he said in a statement.

Kansas’ law, among the strictest voter identification statutes in the country, is defended by Republicans who say the rules are meant to prevent voter fraud.

On Tuesday, a Kansas state judge issued a separate ruling extending voting rights through the Nov. 8 election of about 17,500 people who registered to vote at motor vehicle offices.

(Reporting by Timothy Mclaughlin in Chicago; Editing by Matthew
Lewis) 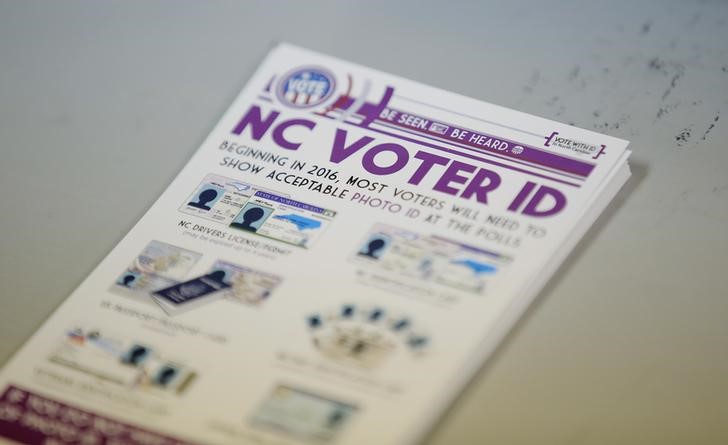 WASHINGTON (Reuters) – The U.S. Supreme Court’s handling of North Carolina’s long-shot bid to reinstate its contentious voter identification law will set the tone for the court’s treatment of similar cases that could reach the justices before the Nov. 8 elections.

Attorneys for North Carolina Governor Pat McCrory, a Republican, filed court papers late on Monday with Chief Justice John Roberts, seeking restoration of parts of the law and arguing the appeals court was wrong to set it aside so close to the election.

The Supreme Court rarely grants such emergency requests, and is even less likely to do so now because it is down to only eight justices, rather than the usual nine, following the February death of conservative Justice Antonin Scalia.

He was a likely vote to put the North Carolina law back in place for the election. But the court is now split evenly between liberals and conservatives.

“With a 4-4 court they are going to be very reticent (to intervene), whatever the topic,” said Rick Hasen, an election law expert at University of California, Irvine School of Law.

The vote of moderate liberal Justice Stephen Breyer could be key. Last month, he cast the deciding vote on a case involving a transgender student wanting to use the boys’ restroom at school. Saying he did so as a courtesy to his colleagues, Breyer voted to block a lower court decision in the student’s favor. This led some legal experts to say Breyer could vote this way again.

In 2014, the high court let some parts of the North Carolina law take effect for that year’s election. It acted similarly on a Texas voter identification law. Breyer did not publicly dissent in either case, unlike some of his liberal colleagues.

Opponents of the North Carolina law say the state’s argument about precipitous disruption of election law is weak, arguing that the 4th Circuit ruling left plenty of time for election workers to train on operating without voter ID in place.

Allison Riggs, an attorney for the Southern Coalition for Social Justice, a civil rights group that challenged the law, also noted that the state waited 17 days to file its Supreme Court application.

The North Carolina law, which also limited early voting and prevented residents from registering and voting on the same day, was enacted in 2013.

Whatever the high court does is likely to signal how it would act in any other voting controversies before the election.

In recent weeks, courts have handed wins to voting rights advocates in several states, including Wisconsin and Texas. Some of those disputes could also reach the high court before the election.

North Carolina’s application does not seek to reinstate all elements of the law prior to the election, meaning some provisions, including a ban on same-day registration, will not be in effect whatever the high court does.