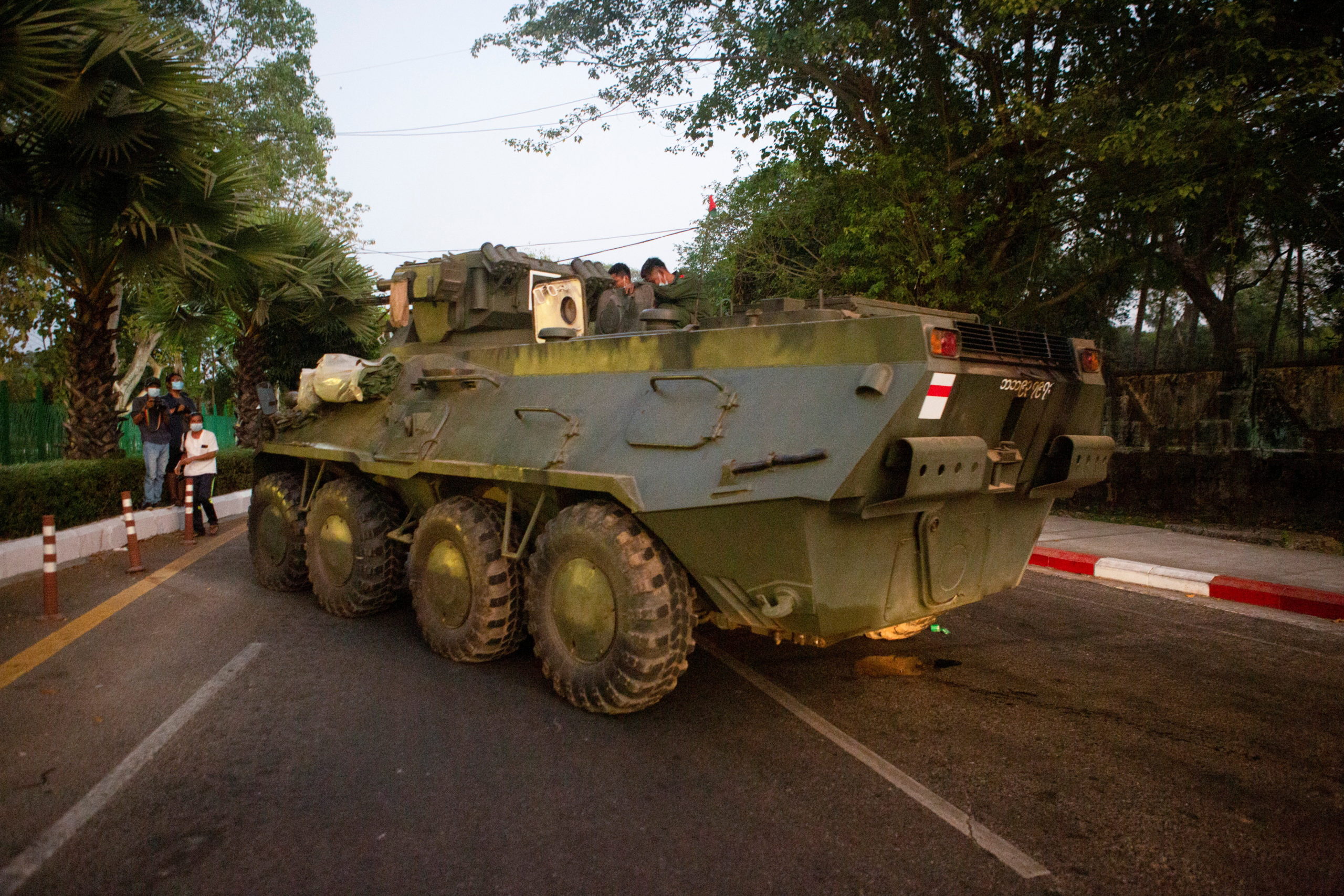 (Reuters) – Protesters in Myanmar kept up demands on Monday for the release of ousted civilian leader Aung San Suu Kyi and an end to military rule despite the deployment of armored vehicles and more soldiers on the streets.

Suu Kyi, detained since a Feb. 1 coup against her elected government, had been expected to face a court in connection with charges of illegally importing six walkie-talkie radios, but a judge said her remand lasted until Wednesday, her lawyer, Khin Maung Zaw, said.

The coup and arrest of Nobel Peace Prize winner Suu Kyi and hundreds of others have sparked the biggest protests in Myanmar in more than a decade, with hundreds of thousands denouncing the military’s derailment of a tentative transition to democracy.

“This is a fight for our future, the future of our country,” youth activist Esther Ze Naw said at a protest in the main city of Yangon. “We don’t want to live under a military dictatorship. We want to establish a real federal union where all citizens, all ethnicities are treated equally.”

The unrest has revived memories in the Southeast Asian nation of bloody outbreaks of opposition to almost half a century of direct army rule that ended in 2011, when the military began a process of withdrawing from civilian politics.

Violence this time has been limited, although police have opened fire several times to disperse protesters. One woman who was hit by police fire in the capital Naypyitaw last week is not expected to survive.

Two people were lightly wounded on Monday when police in the city of Mandalay used rubber bullets and catapults to break up a protest, media and residents said.

Coup leader Min Aung Hlaing told a junta meeting on Monday that authorities were trying to proceed softly, but said: “Effective action will be taken against people who are harming the country, committing treason through violence.”

Authorities have said police were also hurt by stones thrown at some protests.

As well as the demonstrations in towns and cities, a civil disobedience movement has brought strikes that are crippling many functions of government.

TROOPS ON THE STREETS

Armoured vehicles were deployed on Sunday in Yangon, the northern town of Myitkyina and Sittwe in the west, the first large-scale use of such vehicles since the coup.

More soldiers have also been spotted on the streets to help police, including members of the 77th Light Infantry Division, a mobile force accused of brutality in campaigns against ethnic minority insurgents and protests in the past.

Crowds were smaller, though it was unclear if people were intimidated by the soldiers or fatigue was setting in after 12 days of demonstrations.

“We can’t join the protests every day,” said a laid-off travel officer worker in Yangon who declined to be identified. “But we won’t back down.”

At a protest outside the central bank, demonstrators pasted a sign saying “We do not want military government” on an armored vehicle. Police sealed off the headquarters of Suu Kyi’s party, searching it as protesters demonstrated nearby.

Police in Naypyitaw detained about 20 student protesters, one of whom posted pictures of them chanting as they were taken away on a police bus. They were later released.

The army has been carrying out nightly arrests and has given itself search and detention powers. At least 400 people have been detained, the group Assistance Association for Political Prisoners said.

On Sunday, the military published penal code amendments aimed at stifling dissent and residents reported an internet outage after midnight on Sunday that lasted until about 9 a.m.

“It’s as if the generals have declared war on the people,” U.N. Special Rapporteur Tom Andrews said on Twitter.

Suu Kyi’s party won a 2015 election and another on Nov. 8, but the military said the vote was fraudulent and used that complaint to justify the coup. The electoral commission dismissed accusations of fraud.