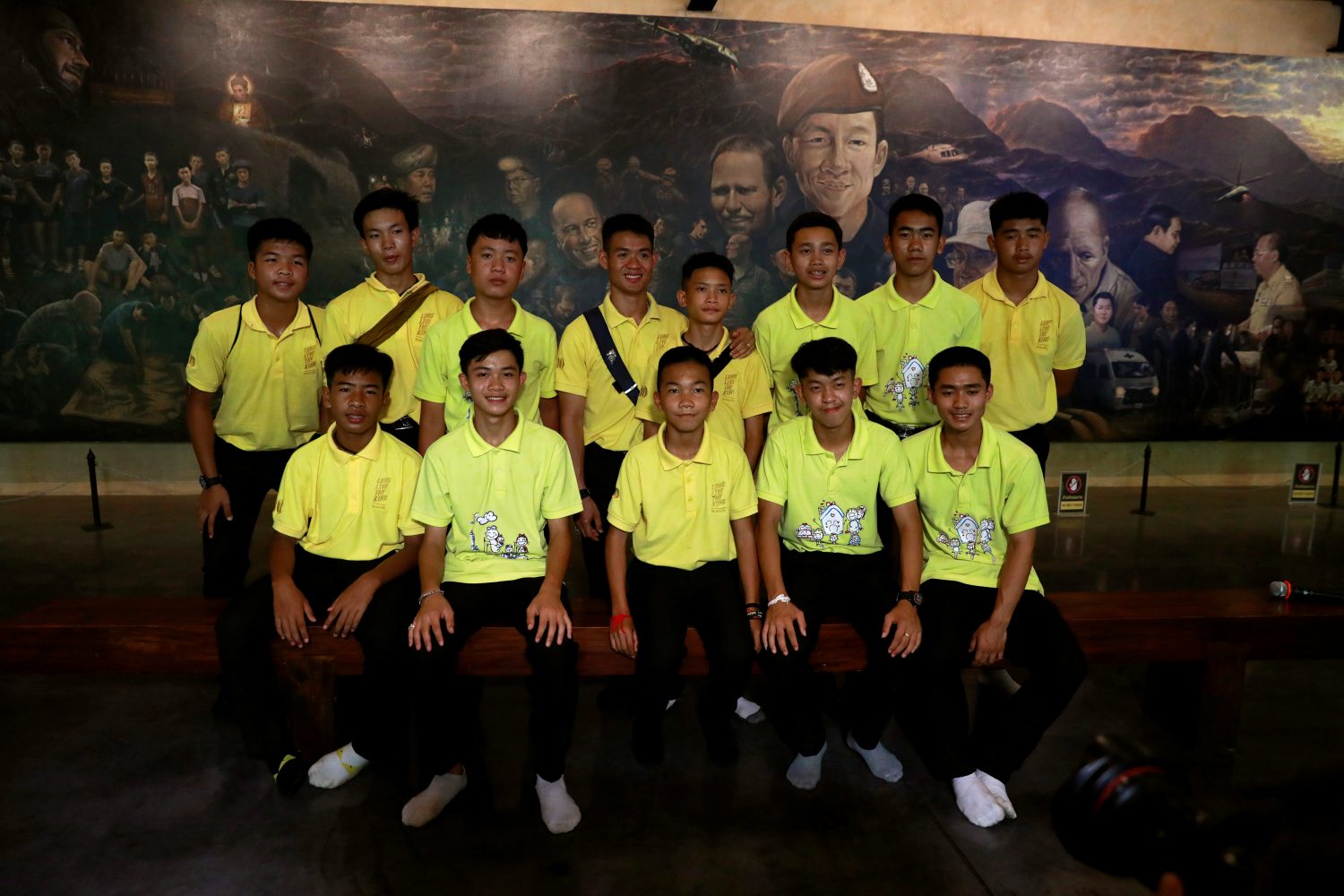 CHIANG RAI, Thailand (Reuters) – A Thai soccer team trapped in a cave last year for 17 days returned there on Monday to perform Buddhist rituals honoring a former navy diver killed in the dramatic effort to rescue them that captivated the world.

A year after their ordeal, the team of 12, wearing yellow T-shirts, accompanied by their coach, gave alms to monks in honor of Sergeant Saman Kunan, who died while he worked underwater.

“I want to thank Sergeant Sam,” Ekkapol Chantawong, assistant coach of the Wild Boars soccer team, told Reuters Video News, as the group placed flowers before a portrait of the diver, set beside a row of shaven-headed monks in orange robes.

“Without him, I and the boys would not be standing here.”

The team, aged between 11 and 16, were trapped with their coach on June 23, 2018 when a rainy season downpour flooded the tunnels of a cave complex they were exploring in the northern province of Chiang Rai.

The race to rescue them gripped public attention as experts from around the world volunteered to help.

Saman Kunan, a former member of an elite Thai Navy SEAL unit, died on the night of July 5 after entering the cave to place oxygen tanks along a potential exit route.

Saman’s wife, Waleeporn Kunan, said the boys always expressed their gratitude to her when they crossed paths in the district where they all live.

“Every time they see me, they would run over just like back then right after their rescue,” she said.

The boys received soccer shirts and offers of tours and match tickets as their rescue unfolded during the World Cup.

A year later, fascination with the saga has yet to die down.

Netflix said in April it had signed a deal to make a miniseries about the rescue, to be directed by “Crazy Rich Asians” director Jon M. Chu and Nattawut “Baz” Poonpiriya.

Two books about the rescue have been published, and a feature film by British-Thai director Tom Waller, “The Cave”, wrapped shooting in December, the Hollywood Reporter has said.

The boys, regarded as national treasures in Thailand, declined to be interviewed and referred questions to their soccer coach.

“Life is the same but now more people know about me,” said Ekkapol, who founded a new soccer team, Ekkapol Academy, for underprivileged and stateless children.

Ekkapol, who is from a minority group in Myanmar, was granted Thai citizenship after the rescue, as were several of the rescued boys who were also stateless.

“The football team is to encourage the boys, especially the border boys, to have somewhere they can play football. To have their own field and a brighter future,” he said.