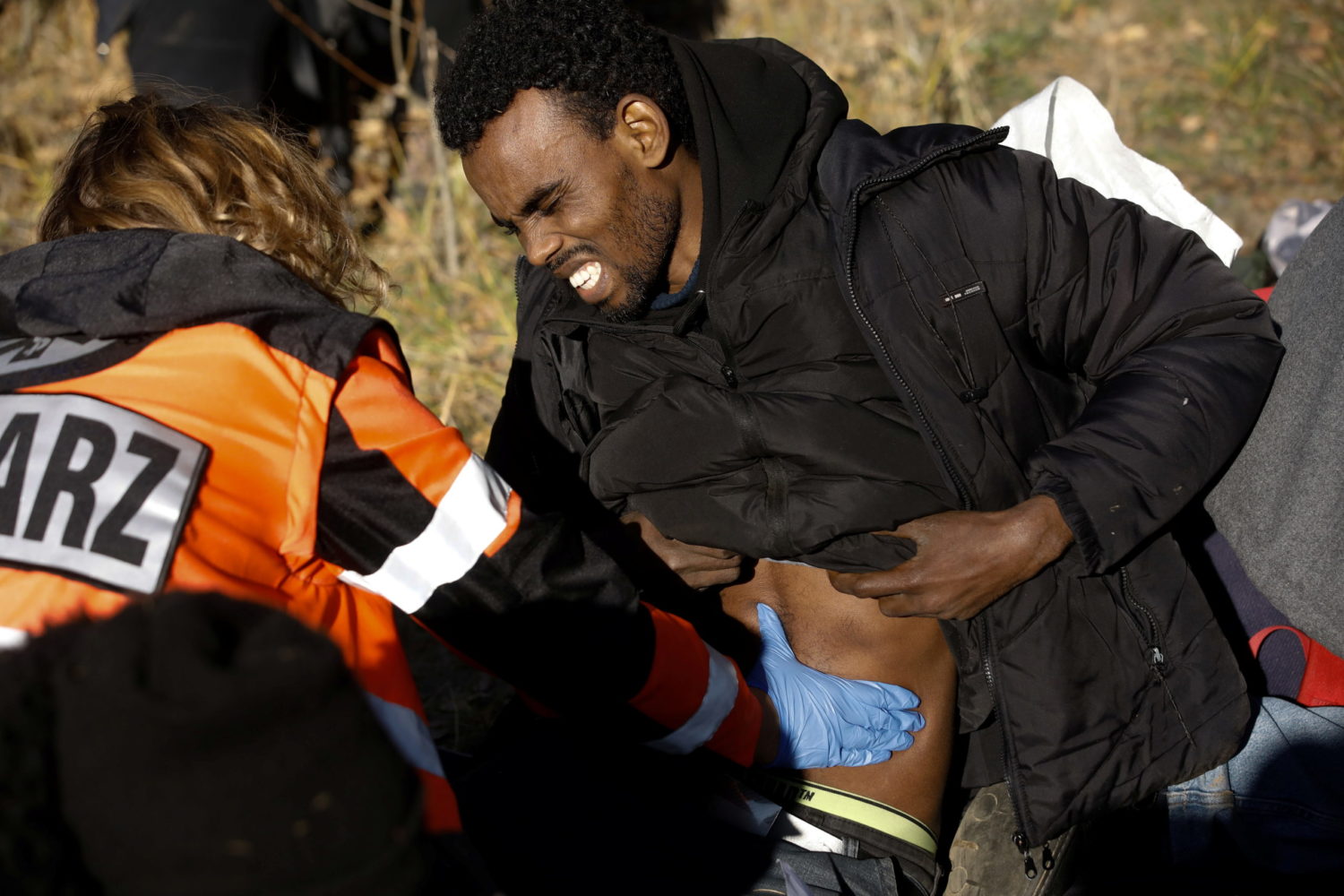 By Joanna Plucinska and Kacper Pempel

Near SIEMIANOWKA, Poland (Reuters) – Somali migrant Abdi Fitah’s bid to cross into Poland from Belarus ended with him barefoot and freezing after he lost his shoes in a river and wandered for days in the woods along the border.

The 23-year-old is one of thousands of people, including children, from the Middle East, Africa and Afghanistan who have tried to enter Poland from Belarus in recent weeks, with charities saying they face harrowing conditions on the border.

Jakub Sieczko, a medical doctor and coordinator of the Medycy na Granicy (Medics on the Border) aid group, said he feared there would be more deaths as temperatures drop.

“There are more and more people who are hungry and dehydrated…The conditions are getting worse,” Sieczko told Reuters, adding that many migrants are from warm countries and unprepared for the cold.

Ibrahim, who said he left Somalia 15 days ago, thought he was having a heart attack while walking through the woods with a group of fellow migrants, before receiving medical help for hypothermia at the border.

“The conditions are very cold, (we’re) not wearing shoes,” he said, explaining how he lost his shoes in the river. “The leg is a big problem. I’m not wearing (enough) clothes…(or) shoes.”

He crossed the border with six other Somalis. Three of them ended up in an ambulance due to their health problems, which included a sprained ankle and symptoms of hypothermia.

Four were driven off in a border guard truck. It’s unclear if they went to a detention center or were pushed back to the border.

The United Nations High Commissioner for Refugees (UNHCR) has said Poland is in breach of international law in its efforts to force migrants back into Belarus instead of offering them asylum.

Poland says it is respecting its international obligations while trying to stem the flow of migrants who, it says, often do not want asylum in Poland but rather in western Europe.

The European Union accuses Belarus of orchestrating the flow to put pressure on the bloc in retaliation for sanctions slapped on Minsk over human rights abuses.

Polish authorities say more than 15,000 attempts to cross the border have been made since early August, mostly by Iraqi, Afghan and Syrian nationals. The attempts have become more frequent and now exceed 500 a day.

Under EU rules, migrants should in principle apply for asylum in the first country they enter, but the bloc is planning reforms to ensure asylum obligations are more evenly spread.

Franek Sterczewski, a Polish parliamentary deputy with leading opposition group Civic Coalition, said more migrants were being turned back by border guards into the woods.

“(The Somali migrants) were sent back to the border seven times,” he said. “They’ve been wandering the forest for weeks, the temperature at night is around zero degrees, it’s raining and it’s very cold. Pushing them back will put their health and life at risk.”