Pastor Jim & Lori Bakker welcome Bill Whaley “The Junk Man” as they discuss how to Live Off Junk for Day 2 on The Jim Bakker Show. 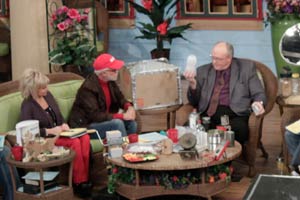 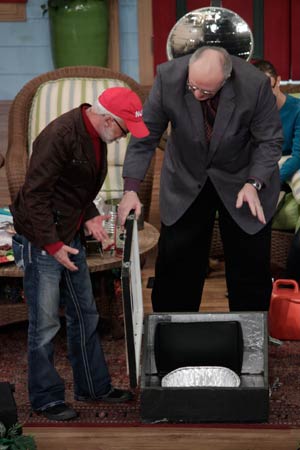 Do you know how to avoid panic and how to avoid going crazy when the world is falling apart? You have to have it together and have answers. -Pastor Jim Bakker 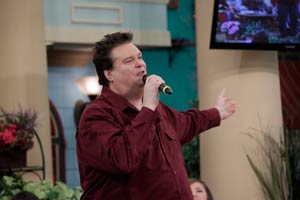 When you see the sun totally dark, like it says in the Bible, Jesus is about to come back. -Pastor Jim Bakker

“Surviving Christian Ministries” founder Bill Whaley, has fascinating tips on how those living on the streets can survive. Bill shares an enthralling story about how he fired the power company over a customer service charge. He believes in being practical and not allowing the excessive charges to be inflated. When his bill continually came in with a thirty dollar customer service charge, he was told it was for the privileged of having his meter. He ordered the power company to come out and remove the lines and the meter the next day, which they did. Living economically is not so hard, especially for those who have had to learn to live on less. Bill’s practical matters allow people to learn how to live on a great deal less than they currently do. The same principals can be applied to end times and preparation. When cooking on a nice gas stove may not be an option, there are practical solutions that can be done. Bill Whaley has dedicated his life to finding alternative ways to turn refuge into usable household items.

Bill runs the power to his Yurt hone on six solar panels. He has enough power even if the sun does not shine and the wind does not blow, he is covered for at least seven days. He also uses a gas generator, which he runs on saw dust. While this may sound bizarre, saw dust can be converted into gas. He can also run energy off the septic tank. This sounds very unattractive to some people, but methane gas in the sewers, can be used to run power. Using alternative measures and utilizing everything within reach that is free, people can learn to live frugally. While some people may walk by and look at Bill’s round Yurt and weird solar panels, he is living tax free, because a Yurt cannot be taxed in Missouri.

Ever heard of tanking a tuna can and using it as a Bunsen burner? He uses old tuna cans and rolls up corrugated cardboard inside. Pouring melted and old crayons into the paper, it lights to be a perfect burner to heat or cook with. Plastic comes from petroleum and is gas based. Everything that we use has a gas base to it. The same principal applies to the plastic that is thrown away every day. It can be melted down and used as a gas in the event of an emergency.

Bill Whaley and his wife keep their home or Yurt at 65 degrees year round; if they get cold they put a blanket on. Turn the thermostat down at night by lying on top of a flannel blanket and covering up with a flannel blanket is how they stay warm on the coldest nights. Back in the olden days, there were not modern heating systems and people maintained the ability to stay warm. The old four corner post beds were used as decorative ways to hang heavy curtains around them. These types of beds allowed people to keep the body heat inside and keep them warm.

Pastor Jim has been looking for a way to be able to market solar ovens to send out with the food. Bill Whaley made a solar oven using a cardboard box, aluminum foil and glue. To cook in this a person will need a turkey style bag and a black bowl. This box method will get up to 250 degrees for cooking food slowly all day, for free. He has another method or cooking box, which will get up to 350 degrees and he has cooked an entire turkey in. His fascinating ministry teaches people how to survive when they are left with nothing but trash. Turning trash into treasures is what Bill Whaley‘s main focus is.

Daniel 12:1 KJV And at that time shall Michael stand up, the great prince which standeth for the children of thy people: and there shall be a time of trouble, such as never was since there was a nation even to that same time: and at that time thy people shall be delivered, every one that shall be found written in the book.

Matthew 24:29 NCV Soon after the trouble of those days, ‘the sun will grow dark, and the moon will not give its light. The stars will fall from the sky. And the powers of the heavens will be shaken.’