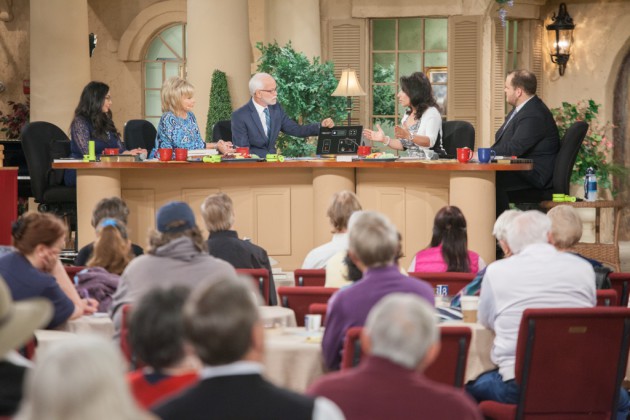 In all my years in Christian television, I’ve never met a woman like Brigitte Gabriel.

I’ve had the chance to interview some exceptional people on my shows — politicians, entertainers  from all walks of life, and a multitude of preachers and prophetic voices — but I have never heard a story as powerful as hers. I talk about how our entire world can be turned upside down in an instant, how quickly we can lose nearly everything we know, and here is a remarkable woman who has lived through it all.

Lori and I were so blessed to be able to welcome her to Morningside. It was one of the highlights of our entire lives! Listening to Brigitte tell her story, it is clear God’s hand has been on her and her family for many years. We had read about Brigitte’s childhood in her best-selling books Because They Hate and They Must Be Stopped, but listening to her voice intensify when she talks about what radical Islamists did to her family breathed new life into those words.

If you have not watched Brigitte Gabriel’s episodes, the shows are on our Web Page & ROKU! They may be the four most important shows we’ve ever done. The world needs to hear this story!

She was truly a miracle child. Her parents had been praying for a child for decades and, finally, God answered those prayers by giving a 55-year-old mother and 60-year-old father a baby girl. They were a Christian family living in Lebanon, and her father owned a restaurant after retiring from a real estate career. Brigitte said they lived a good life — she attended a private school, and a chauffeur drove her there — until the Lebanese Civil War broke out in 1975.

All of a sudden, Brigitte and her family were living underground, in the middle of a war zone! Her family’s home was destroyed by a bomb dropped by Muslim forces who were trying to capture a nearby army base. The bomb, however, struck their house — where a 10-year-old girl lived. Can you believe it?

It’s a miracle from God that Brigitte wasn’t killed! However, she did have to go to the hospital with the injuries she sustained. And then, when it was finally time to go “home,” she and her family didn’t have a home to go to. She told us she lived in an 8-foot-by-10-foot bomb shelter for seven years! Seven years underground without electricity, running water and very little food! That was their new life!

Brigitte’s family was fortunate to have access to the stored bags of rice and chickpeas that were in the restaurant’s basement. They would still have to go out and try to pick some dandelions to eat. Dandelions! She told us how they risk their lives to go search for water, because there would be enemy snipers who would shoot at them!! And this new life went on for SEVEN YEARS!

There’s so much more, I can’t possibly go into all the details here. You really need to hear her tell it. It’s unthinkable! My heart sank as I sat across from her on the stage and I looked at her arm to see the scars she still bears from her childhood. I cannot believe that shrapnel from the explosions she lived through is still under her skin and in her bones. This sight made it all the more real to me. It brings to mind Romans 8:28 (MEV) “We know that all things work together for good to those who are called according to His Purpose.”  Brigitte did not realize what a voice God was giving her to wake us up.  If happened to her it could happen to us.

Please watch our recent shows with her and read her books if you can. This is an important message for us all, because what Brigitte told us is what I’ve been trying to warn America about. We have enemies! They are real, and they have sworn to destroy the United States. They have vowed to destroy us just like they destroyed Brigitte’s childhood and forced her and her family to live underground!

Many people do not want to hear me preach about why they NEED to be prepared. But if you listen to Brigitte, you’ll understand what I’m begging you to do and why I’m begging you to do it now. No one in Brigitte’s family expected their beautiful restaurant to be wiped out. Her parents did not expect their miracle baby would be injured by a bomb and live in a shelter for years! No one EVER expects this to happen, but it CAN happen! Your entire life can change in an instant!  If you are not prepared, get prepared now before it’s too late!

In 1 Thessalonians 5:2-3 (MEV), the Bible tells us “For you know perfectly that the day of the Lord will come like a thief in the night. When they say, ‘Peace and safety!’ then sudden destruction will come upon them as labor upon a woman with child, and they shall not escape.”

Brigitte couldn’t escape for seven years, but she finally did. Now she’s one of the most sought-after speakers in the world. So many different television networks want to hear what she has to say. She’s a best-selling author. And she’s proof that no matter how dark things get, God will one day deliver us. God had His hand on her and her family, and he guided them throughout that ordeal. Just like He will deliver all of those who put their faith in Him, no matter what the future holds. But don’t take my word for it. Listen to what Brigitte has to say:

“The one thing I learned is that God puts you through trials and tribulations for a reason. God has a purpose. Nothing happens without a purpose,” she told me. “And God uses every trial and tribulation to remold you and refine you under pressure to shine as a diamond. Diamonds are refined under pressure. And it is that pressure that makes your message more powerful.”

2 thoughts on “A Powerful Message from A Powerful Woman”