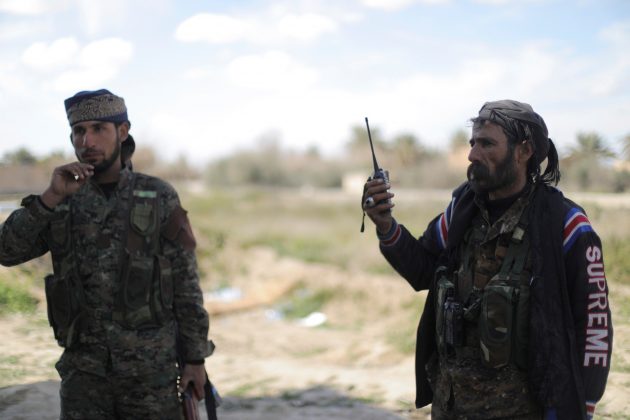 Islamic State faces defeat in Baghouz, the only remaining patch of land it still holds in the area straddling Iraq and Syria where it declared a caliphate in 2014, although it still has control in a few remote areas.

Early on Monday, the Syrian Democratic Forces (SDF) said they had slowed their assault on Islamic State because more civilians were trapped in the area, though it vowed to capture it soon.

A convoy of trucks was visible heading into Baghouz in the morning, and the Britain-based Syrian Observatory for Human Rights said 150 jihadists left the enclave, along with about 250 other people.

There was no immediate confirmation of the surrenders from the SDF or any indication as to how many jihadists remained holed up inside.

Islamic State’s fighters have gradually fallen back on Baghouz at the Iraqi border as they retreated down the Euphrates in the face of sustained assault in both countries after its grotesque displays of cruelty roused global fury.

Despite the setbacks, the group remains a deadly threat, developing alternatives to its caliphate ranging from rural insurgency to urban bombings by affiliates in the region and beyond, many governments say.

The Syrian Democratic Forces this weekend resumed its assault on the group’s pocket in the village of Baghouz, the culmination of a campaign that included the capture of Raqqa in 2017, when IS also faced other big defeats in Iraq and Syria.

The militia had already paused its attack for weeks to allow thousands of people to flee the area, including Islamic State supporters, fighters, children, local people and some of the group’s captives.

It said on Friday that only jihadists remained, but now says some more civilians are left.

“We’re slowing down the offensive in Baghouz due to a small number of civilians held as human shields by Daesh,” said SDF spokesman Mustafa Bali on Twitter, using an Arabic acronym for Islamic State.

However, “the battle to retake the last ISIS holdout is going to be over soon,” he added.

Dozens of trucks similar to those that had evacuated people from the enclave in recent weeks were visible heading back there on Monday and the drivers said they were going to pick people up at Baghouz.

Col. Sean Ryan, spokesman for the U.S.-led coalition, said in an email that he could not verify who Islamic State was holding but hoped they would be released unharmed.

On Sunday, the SDF faced landmines, car bombs, tunnel ambushes and suicide attacks as they attempted to overrun the enclave – tactics the jihadist group has honed through its hard-fought retreat down the Euphrates.

Reuters photographs from Baghouz on Sunday showed dark plumes of smoke rising above houses and palm trees, and SDF fighters shooting into the Islamic State enclave.

While the capture of Baghouz would mark a milestone in the fight against Islamic State, the group is expected to remain a security threat as an insurgent force with sleeper cells and some pockets of remote territory.