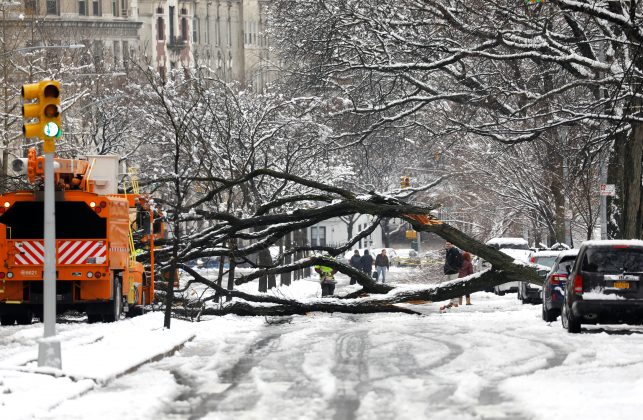 A worker cuts away a tree that fell across Riverside Drive during a snow storm in upper Manhattan in New York City, New York, March 4, 2019. REUTERS/Mike Segar

NEW YORK (Reuters) – New York faced its biggest snowstorm of the winter on Monday as snow spread across the northeastern United States, infuriating commuters who juggled canceled planes and trains and faced icy travels ahead as temperatures plunge. 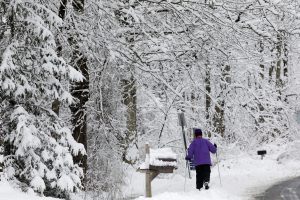 A woman makes her way through the snow on cross country skis during a winter storm in Pallisades, New York March 4, 2019. REUTERS/Mike Segar

That was enough for New York Mayor Bill de Blasio to take the rare step of shutting the nation’s largest public school system and for New Jersey Transit, the largest statewide public transportation system in the United States, to cancel about a dozen commuter trains.

“This is horrible!” said Steve Wesley, 56, as he shoveled snow from his driveway in Maplewood, New Jersey, a New York City suburb.

Wesley’s two-mile local commute by car was delayed nearly two hours by the four to six inches of snow.&nbsp;

“This is not what I want to be doing,” said Wesley, a sales representative for a power equipment distributor. “I’m usually the first one into the office. And if I get there and the parking lot is not plowed, I’ll be shoveling that too.”

Nearly 1,000 U.S. flights were canceled, most at Boston Logan International and New York area airports, according to FlightAware.com.

Government offices and libraries in Boston were closed. In New Jersey, where Governor Phil Murphy declared a state of emergency ahead of the storm, state workers had a two-hour delay.

Commuting challenges may mount over the remainder of the work week as snows melt and then temperatures drop, icing over roadways.

“Each day is a little bit cooler,” said Chenard, noting the week’s highest temperatures for the Northeast will be in the low 30s. “You’ll get some melting during the day, especially when the sun is hitting the snow, and then at night, it’s going to be cold enough to refreeze. Any road surfaces that aren’t treated certainly could get icy at night into the morning.”