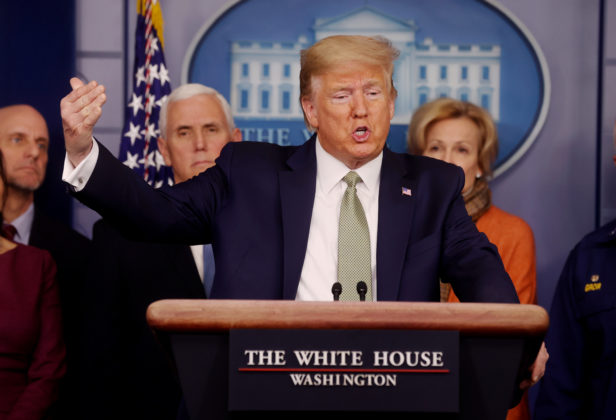 WASHINGTON (Reuters) – As the streets of U.S. cities emptied in response to stepped-up warnings about the coronavirus threat, the Trump administration on Tuesday pursued a $850 billion stimulus package to buttress the economy and weighed a plan to send Americans $1,000 checks.

With the number of reported U.S. cases of the respiratory illness surging past 5,000, millions of Americans hunkered down in their homes instead of commuting to work or school as New York and other major cities escalated “social distancing” policies by closing schools, bars, restaurants and theaters. U.S. deaths from the coronavirus now exceed 90.

In one of the most restrictive policies to date, officials in six San Francisco Bay Area counties ordered residents to stay home beginning on Tuesday for all but the most crucial outings until April 7. The order applies to some 6.7 million people.

“It’s like living in a ‘Twilight Zone.’ It’s crazy. Just a week ago things were so different. You can feel the anxiety in the air,” said Rowan Oake, 36, during a jog through San Francisco’s Presidio Park.

But sounding a note of optimism, President Donald Trump said he believed the hard-hit U.S. economy would come back rapidly when the coronavirus spread slows and that progress is being made against the pathogen.

The administration was seeking $850 billion for a stimulus package, according to a U.S. government official who spoke on condition of anonymity. The package would include $50 billion for airlines – hard hit by the pandemic – and $250 billion for small business loans.

Trump said his administration was considering whether to send checks to individual Americans of $1,000 to help them weather the crisis, though he indicated details needed to be worked out.

U.S. Treasury Secretary Steven Mnuchin suggested there would be some sort of an income restriction on such a step. “I think it’s clear. We don’t need to send people who make a million dollars a year checks.”

Mnuchin said he would meet with lawmakers to discuss the stimulus plan on Tuesday and that he was expecting bipartisan support. The Senate later in the day was prepared to take up a multibillion-dollar emergency spending bill passed by the House of Representatives on Saturday.

Travel restrictions within the United States are also being considered, Trump said, adding that he hopes a national lockdown would not be necessary.

It was St. Patrick’s Day but the mood was sober, not joyous, after traditional parades and parties celebrating the Irish heritage of many Americans were canceled across the country and usually crowded pubs were shuttered.

Even so, New York Mayor Bill de Blasio used the occasion to rally his city, hailing the “indomitable spirit” of America’s Irish immigrants, many of whom have settled in New York.

“New York City’s streets may be empty this St. Patrick’s Day, but thanks to that very same spirit, our hearts are full,” he wrote on Twitter.

Earlier, the mayor told CNN he would consider imposing a similar shelter-in-place directive to the one undertaken in San Francisco for the most populous U.S. city.

Wall Street rebounded on Tuesday following its steepest declines since the 1987 crash, as the Federal Reserve took more steps to boost liquidity in a market sapped by business and travel disruptions due to the pandemic.

The benchmark S&P 500 <.SPX> was up more than 4% after the central bank relaunched a financial crisis-era purchase of short-term corporate debt.

Mnuchin said it may get to a point where shortening market trading hours would be needed, but that the intention is to keep markets open.

The coronavirus also affected politics as three states hold primary elections on Tuesday in the state-by-state process of selecting a Democratic candidate to challenge Trump in the Nov. 3 U.S. election.

Former Vice President Joe Biden and Senator Bernie Sanders square off in Florida, Illinois and Arizona, but Ohio officials canceled that state’s primary due to coronavirus fears hours before the vote was to begin.

The tally of confirmed U.S. cases has multiplied quickly over the past few weeks as testing increased, surpassing 5,200 and prompting fears American hospitals might soon be overwhelmed, as Italian medical centers have been strained to the breaking point by the pandemic.

New York, Washington state and California have the most confirmed cases with Washington accounting for the majority of fatalities with 48, many linked to an outbreak at a nursing home in the Seattle area.

The United States has lagged behind other industrialized nations in its ability to test for the novel coronavirus, making it more difficult to track the contagion.

After previously downplaying the danger and declaring the situation under control, the White House urged Americans on Monday to avoid gatherings of more than 10 people and called for closing bars, restaurants and other venues in states where local virus transmission exists.

Deborah Birx, White House coronavirus response coordinator, would not say whether the Trump administration was closer to issuing some sort of domestic travel restriction.

“We’re looking very carefully at the data every day and that’s why you see this escalation in guidelines from the president,” she told Fox News.