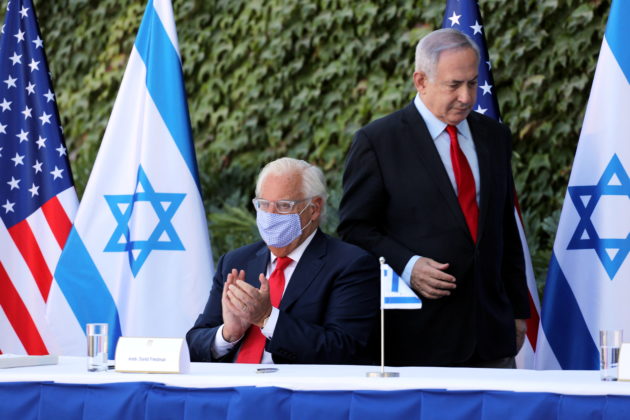 Israeli Prime Minister Benjamin Netanyahu and the U.S. Ambassador to Israel David Friedman attend a special ceremony to sign an extension of the Israel-U.S. scientific cooperation agreement in “Judea, Samaria” (the biblical names for the West Bank) and the Golan Heights, at Ariel University in the Jewish settlement of Ariel, in the Israeli-occupied West Bank October 28, 2020. Emil Salman/Pool via REUTERS

The West Bank settlement of Ariel, the site of an Israeli university, was chosen as the venue for a ceremony opening a new avenue of U.S. scientific cooperation with Israeli researchers.

Palestinians, who seek the West Bank for a future state, said the move made Washington complicit in what they termed Israel’s illegal settlement enterprise.

In Ariel, Netanyahu and David Friedman, the U.S. ambassador to Israel, revised three agreements reached between 1972 and 1977, enabling researchers in settlements to apply for U.S. government funds. They also signed a new scientific and technology cooperation accord.

Under the now-lifted prohibition, research money for Israelis could not be distributed in areas such as the West Bank that Israel captured in the 1967 Middle East war. Most countries view permanent settlements on such land as a violation of the Geneva Conventions, though Israel disputes this.

“The Trump vision … opens Judea and Samaria to academic, commercial and scientific engagement with the United States,” Netanyahu said at the ceremony in Ariel, using biblical names for West Bank territory.

“This is an important victory against all those who seek to delegitimize everything Israeli beyond the 1967 lines.”

Friedman said $1.4 billion had been invested by three U.S.-Israeli research cooperation funds since 1972.

A spokesman for Palestinian President Mahmoud Abbas said lifting of the funding ban represented “American participation in the occupation of Palestinian lands.”

At the ceremony, Netanyahu again praised Trump for his “successful approach to bringing peace to our region”, citing U.S.-brokered deals for diplomatic relations between Israel and several Arab states.