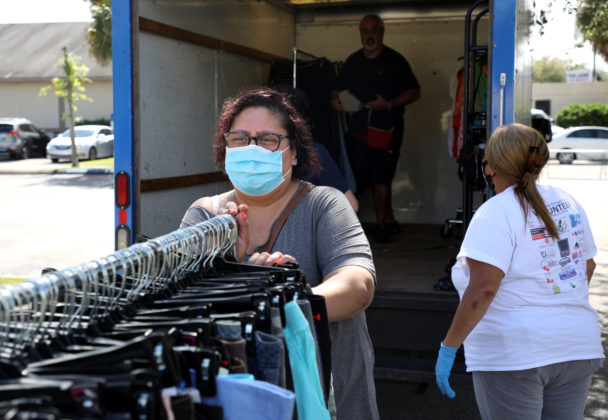 Lisandra Bonilla, who was furloughed from her job at an employment agency due to the coronavirus disease (COVID-19) pandemic, helps set up the 'It Takes a Village' clothing and provisions outreach event, part of the extensive volunteer work she does, in Kissimmee, Florida, U.S., October 24, 2020. Picture taken October 24, 2020. REUTERS/Gregg Newton

(Reuters) – The winner of the race for the White House will face a generation of low-to-middle income Americans struggling to get back to work because of a health crisis not seen in more than 100 years.

Whether it’s President Donald Trump or Democratic challenger and former Vice President Joe Biden, the reality is grim: about half of the 22 million who lost their jobs during the pandemic are still out of work.

New hiring is slowing, dimming prospects for the low-wage workers hit hardest by job losses. Infections of the virus that killed more than 225,000 Americans are rising to new records. Hotels, transportation companies and food providers warn that more layoffs are coming, and the government aid that helped many pay the bills is long gone.

Securing a future for a vast, growing underclass “is the most important challenge America faces over the next few years, 10 years, 20 years,” said Gene Ludwig, a former comptroller of the currency under President Bill Clinton and author of “The Vanishing American Dream,” a book about the economic challenges facing lower and middle income Americans.

“We cannot sustain a democratic society that has these kinds of numbers of low and middle income people that aren’t able to have a hope for the American dream and live decently.”

Congressional Democrats and the Trump administration have been trying to negotiate a $2 trillion coronavirus aid bill, but many Senate Republicans object to the cost and question whether more stimulus is needed. A deal may not be reached until early 2021.

That’s going to be too late for some.

People receiving the enhanced benefits were able to spend more, build savings and pay off debt, according to an analysis by the JPMorgan Chase Institute.

But after the benefits expired at the end of July, poverty is once again on the rise – with the monthly poverty rate reaching 16.7% in September from 15% in February, according to the Columbia study. After a decade of decline, hunger is rising nationwide.

Lisandra Bonilla, 46, saved roughly a third of the enhanced unemployment benefits she received after she was furloughed in late March from her job at an employment agency in Kissimmee, Florida. “I had saved a lot because I didn’t know what was going to happen,” she said.

It was smart planning: in August her benefits were cut to $275 a week before taxes, the maximum in Florida, down from more than $800.

Bonilla returned to work part-time in late September, but now she is struggling to pay the bills on half her previous pay, and fears her savings will be gone by December.

If she isn’t hired full time soon, she needs to find another job.

“We’re trying to shovel ourselves out of the hole, but at the same time the hole is getting bigger,” said Wendy Edelberg, director of the Hamilton Project and senior fellow at the Brookings Institution.

Two factors are particularly worrying, she said. More than 420,000 small businesses shuttered between March and mid-summer, which is more than three times the typical pace, she estimates. And permanent layoffs are also on the rise, hitting 3.8 million in September from 1.3 million in February – similar to levels seen before the 2008 election.

Bishop Donald Harper has been on more than 50 job interviews since he was furloughed in March.

Harper, 55, a veteran chef, most recently oversaw five restaurants at an Orlando resort. But with occupancy still low, it’s not clear when he’ll get back to work.

Applications for jobs at super markets or in health care have also been fruitless.

“I can do anything and everything,” said Harper, who also serves as a bishop for a nondenominational church. He is struggling to pay for food and utilities on $275-a-week unemployment, and three months behind on his $1,900 a month rent.

“I don’t want to be homeless,” said Harper, who lives with two children ages 10 and 13. He has reached out to more than 20 groups seeking rental assistance, with no luck.

The United States has 2.4 million and growing “long-term” unemployed, officially defined as those who have been out of work for 27 weeks or more. Getting everyone back to work is crucial, but economists say these job seekers are at greater risk of dropping out of the labor market or taking lower paying jobs.

This week, the U.S. Commerce Department is expected to report that Gross Domestic Product surged in the third quarter, thanks in part to fiscal stimulus that kept U.S. workers afloat, but has mostly expired.

Now, people who are out of work or in low-wage jobs need rental support, direct cash payments and food assistance, as well as federal jobs projects and retraining programs, labor economists say.

If elected, Biden has pledged to raise the federal minimum wage, and roll out trillions of dollars in infrastructure and green energy programs. But he’ll need the votes in Congress to do it.

Trump has signaled support for more federal stimulus, but has offered fewer specifics on jobs.

Until help arrives, workers are struggling.

Rachel Alvarez, 44, a single mother of three in Naples, Florida, starts a new job this week as a server at a restaurant – her first time working since she lost her job in March.

Restaurant workers who depend on tips aren’t making much money, because business remains slow due to the coronavirus, she said. She hasn’t paid rent since June, and is still waiting to hear from the county government about a grant.

“I’m going to keep my head up, because if shit like this ever happens to my children I want them to keep their head up too,” said Alvarez.