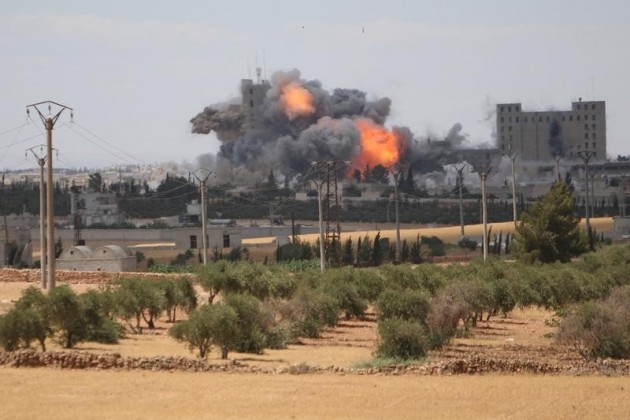 Smoke and flame rise after what fighters of the Syria Democratic Forces (SDF) said were U.S.-led air strikes on the mills of Manbij where Islamic State militants are positioned, in Aleppo Governorate, Syria June 16, 2016. REUTERS/Rodi Said

By Lisa Barrington and Suleiman Al-Khalidi

BEIRUT (Reuters) – Air strikes hit rebel-held parts of Syria’s Aleppo city on Thursday just hours into a 48-hour ceasefire announced by Russia to try to curb weeks of intense fighting as government forces battle for control of the whole city.

Russia, an ally of President Bashar al-Assad, announced the brief truce in the northern Syrian city on Thursday but did not say which parties had agreed to it. There has been no public comment from Assad’s government or factions fighting his forces on the truce announcement.

However the Britain-based Syrian Observatory for Human Rights said aerial strikes hit neighbourhoods in the opposition-held sector and that there were reports of one death and some injuries.

Rebels had also fired rockets into government-held territory in Aleppo, the Observatory said, and fighting and air strikes continued in the surrounding countryside.

Bebars Mishal, a civil defence chief working in rebel-held Aleppo told Reuters that strikes on residential areas had caused fires and damage. “The truce was supposed to have come into effect at 12 midnight, but now there is no truce,” he said.

The international focus in Syria in recent weeks has partly shifted to the conflict with Islamic State, as government forces and their enemies have made gains at the expense of the ultra-hardline Islamist militants on several fronts.

But the separate hope of foreign powers – that the wider civil war could also be resolved – has broken down.

Hundreds of people have been killed in Aleppo since peace talks broke off, as Assad seeks to regain control of the city which was Syria’s largest before the conflict erupted in 2011 and is now split between rebel and government sectors.

Russian-backed Syrian forces have sought for months to control all supply routes into the city. An escalation in air and artillery strikes in the past two weeks on the last supply route, the Castello road, has put hundreds of thousands of people under effective siege.

Mercy Corps, which runs the largest non-governmental aid operation inside Syria, said the increased bombardment had effectively cut aid to rebel-held areas of Aleppo for the longest period since the war began, driving up food prices and choking efforts to ease the plight of residents.

The Observatory said fierce fighting between government forces and rebels took place overnight near the road, with heavy government shelling of the area. A witness said jets and helicopters were seen continuously in the skies above the Castello road since dawn.

Medical charity Medecins Sans Frontieres (MSF) said an air strike had put one of Aleppo’s biggest hospitals out of service. It was not immediately clear if strikes had hit the 64-bed MSF-supported Omar Bin Abdulaziz hospital directly or nearby, and the extent of damage was not known.

Despite the ongoing violence, U.N. humanitarian adviser Jan Egeland described the announcement of the Aleppo truce as a “first step” in addressing humanitarian needs.

He said recent progress in getting aid to besieged towns elsewhere in Syria gave some hope for improvement, and said several countries including Russia felt a “psychological barrier has been broken” with recent aid breakthroughs.

But he said the opening for aid “could end tomorrow” and that not one siege had yet been lifted.

Fighting has flared across the country since the demise of a U.S.- and Russian-brokered February ceasefire that underpinned the peace talks.

The government describes all factions fighting against it as terrorists, although only two groups — Islamic State and the al Qaeda-linked Nusra Front — are proscribed by the United Nations.

John Brennan, director of the U.S. Central Intelligence Agency, said Russia and Syria had been fighting both groups, but “a large proportion of their strikes are directed against what we consider to be the legitimate Syrian opposition that are trying to save their country from Bashar al-Assad”.

Speaking at a rare public hearing of the Senate Intelligence Committee, Brennan said Islamic State had tens of thousands of fighters around the world, far more than al Qaeda at its height, but he expected the group to rely increasingly on “guerrilla tactics” to make up for battlefield losses and constrained finances.

Islamic State militants have committed genocide against the Yazidi minority in Syria and Iraq, an independent U.N. Commission of Inquiry said.

Such a designation, rare under international law, would mark the first recognised genocide carried out by non-state actors, rather than a state or paramilitaries acting on its behalf.