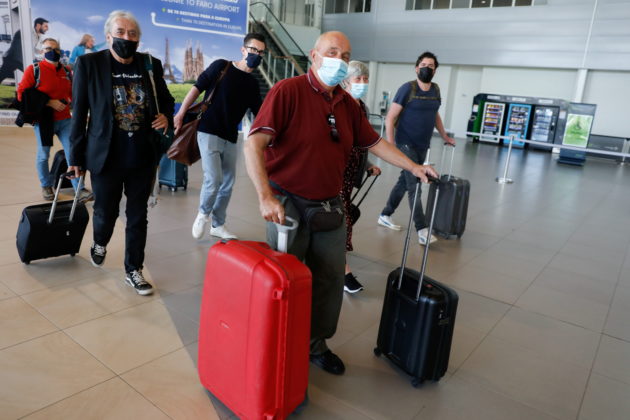 FILE PHOTO: People arrive at Faro Airport from Manchester on the first day that Britons are allowed to enter Portugal without needing to quarantine, as coronavirus disease (COVID-19) restrictions continue to ease, in Faro, Portugal, May 17, 2021. REUTERS/Pedro Nunes/File Photo

Willie Walsh, head of the International Air Transport Association (IATA), also said during an online event that airlines and passengers should be allowed to assess travel risks based on increasingly abundant health data.

The former British Airways head said he was confident Europe could begin to return to normal travel in the second half of the year as vaccination rates rise.

“With sensible testing and screening methods in place we can safely open our borders to regain the freedom that has been taken from us,” he said.

Ministers and officials from G7 countries are meeting in London on June 4-5 ahead of a leaders’ summit next week.

IATA drew on UK testing data that showed a low incidence of COVID-19 in arriving passengers, during the joint presentation with Airbus and Boeing representatives, who demonstrated digital travel risk models.

“These data tell us we can do better,” Walsh said, citing a 2.2% positive rate among 365,895 tests carried out in February-May, according to the National Health Service – or 1.46% excluding higher-risk “red list” countries.

Walsh also singled out Greece, which has largely reopened to foreign tourists, for its use of testing data and artificial intelligence to monitor risk in real time.

“We’re seeing more and more countries questioning whether they have the appropriate measures in place,” he said.

But David Heymann, a professor at the London School of Hygiene and Tropical Medicine, sounded a note of caution.

“What’s really set off governments is the variants, and the fear they will escape the protection offered by vaccines,” he said during the same event.

“No matter what you show in terms of models they’re still going to be concerned about the variants.”