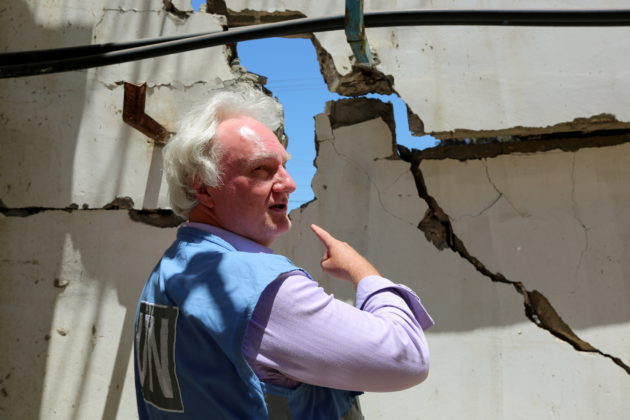 FILE PHOTO: Matthias Schmale, UNRWA's Gaza director, gestures as he inspects the damage at UNRWA'S headquarters, in the aftermath of Israeli air strikes, in Gaza City May 18, 2021. REUTERS/Mohammed Shana

GAZA (Reuters) – The Gaza director of the U.N. agency that deals with Palestinian refugees has been called in for consultation with his bosses in Jerusalem after angering Palestinians with comments they said favored Israel during last month’s fighting.

Protests have erupted in the territory over the comments by UNRWA Gaza chief Matthias Schmale in an interview with Israel’s N12 television on May 22, in which he said he did not dispute Israel’s assertion that its air strikes were “precise.”

Eleven days of conflict between Israel and Hamas erupted on May 10. More than 250 Palestinians were killed in hundreds of Israeli air strikes in Gaza. More than 4,000 rockets, many intercepted, fired by Gaza militants killed 13 people in Israel.

Hamas, the Islamist militant group that rules the enclave has ridiculed him as “a spokesman for the Israeli military,” Schmale, based in Gaza, has apologized for his remarks in which he was commenting on the ferocity of the air strikes and said: “… precision was there but there was unacceptable and unbearable loss of life on the civilian side.”

Sami Mshasha, UNRWA’s spokesman in Jerusalem, said on Wednesday Schmale and his deputy had been “called in for consultation and discussion at the Jerusalem headquarters over the latest developments in Gaza.”

“In the coming few weeks, UNRWA will review the emergency response mechanism in Gaza to determine lessons and conclusions to improve UNRWA’s response and performance during times of crisis and emergency,” Mshasha said in a statement.

In a statement on May 25, Schmale said in apology: “There is no justification whatsoever for killing civilians.” He said: “Military precision and sophistication are never a justification for war.”

Israel’s foreign ministry has said its forces acted “in accordance with international law, in defending our citizens from Hamas’ indiscriminate rocket fire.”