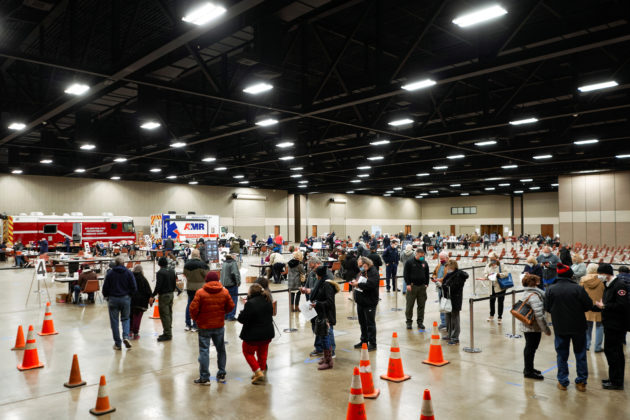 FILE PHOTO: People wait in line to be inoculated against the coronavirus disease (COVID-19) at a vaccination site at the Esports Stadium Arlington & Expo Center in Arlington, Texas, U.S. February 12, 2021. REUTERS/Cooper Neill/File Photo

(Reuters) – Alabama’s governor said on Thursday she was extending the state’s mask mandate for another month, heeding the advice of health experts and breaking with decisions by neighboring Mississippi and Texas earlier this week to lift their requirements.

Alabama’s mask mandate, due to expire on Friday, will remain in effect to April 9, but no longer, Governor Kay Ivey said.

“After that, it’ll be personal responsibility,” the Republican said at a briefing, adding that she plans to continue wearing her mask beyond that date. “Folks, we’re not there yet, but goodness knows we’re getting closer.”

The contrasting moves on masks in the three Southern states comes at a time when the number of new coronavirus infections, hospitalizations and deaths had been sharply falling in the United States after a surge that followed the holiday season.

The improving metric in part reflects an acceleration of the drive to distribute the COVID-19 vaccines that have been approved for emergency use by the U.S. Food and Drug Administration. A third authorized vaccine from Johnson & Johnson began going into arms this week.

Even so, health authorities have stressed the need for caution, urging Americans to keep wearing masks, practice social distancing and other measures to prevent the spread of the virus amid concerns that declines in new infections was plateauing with highly contagious newer virus variants widely circulating.

“Now is not the time to pull back,” Dr. Anthony Fauci, the nation’s top infectious disease official and President Joe Biden’s COVD-19 medical adviser, told MSNBC on Thursday in an interview.

“We were going in the right direction. Now is the time to keep the foot on the accelerator and not pull off,” he said, referring to the announcements that Texas and Mississippi were lifting mask mandates.

Since the pandemic reached the United States early last year, the country has recorded 28.9 million cases and more than 519,000 deaths, more than any other country in the world.

Texas, Mississippi and Alabama are near the bottom of the list of states in terms of administering vaccines, according to the U.S. Centers for Disease Control and Prevention based on the number of people per thousand who have gotten at least one dose. The governors of all three states are Republicans.

The delay in lifting the Alabama mandate will enable more of its 4.9 million residents to be inoculated after the state just administered its 1 millionth dose of vaccine, Ivey said.

Ivey did announce an end to indoor dining restrictions on restaurants and said summer camps can plan to reopen. She is also permitting senior centers to resume outdoor programs and increase the maximum number of visitors from one to two.

Among the improvements she cited was a 77% drop in COVID-19 hospitalizations from its Jan. 11 peak to its lowest level since last June.

“While I’m convinced that a mask mandate has been the right thing to do, I also respect those who object, and believe that this was a step too far in government overreach,” she said.

Even as he urged Americans to stay vigilant, Fauci expressed optimism about a gradual return to normalcy by the end of the summer or early fall if the vaccine rollout goes smoothly, the majority of Americans agree to be vaccinated and new virus variants prove to be manageable.