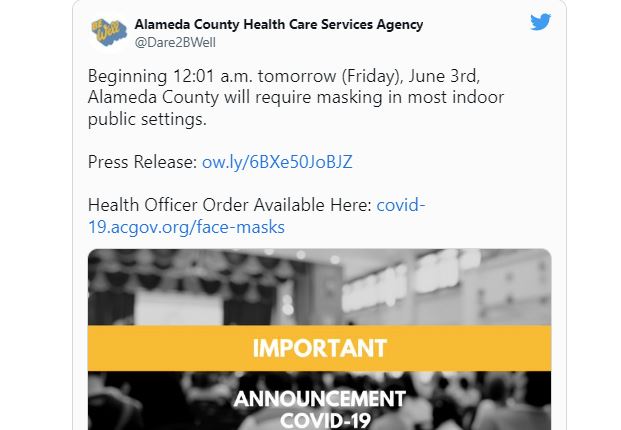 Matt 24:7 For nation will rise against nation, and kingdom against kingdom. And there will be famines, pestilences, and earthquakes in various places. 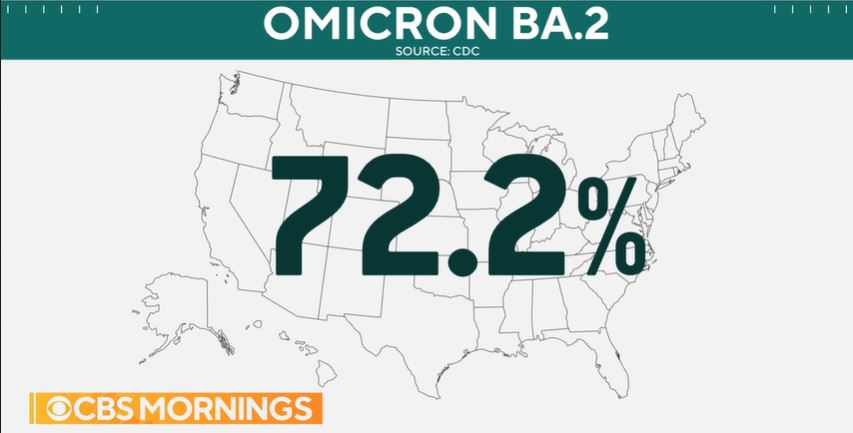 Revelations 6:8 “And I looked, and behold, a pale horse! And its rider’s name was Death, and Hades followed him. And they were given authority over a fourth of the earth, to kill with sword and with famine and with pestilence and by wild beasts of the earth.” 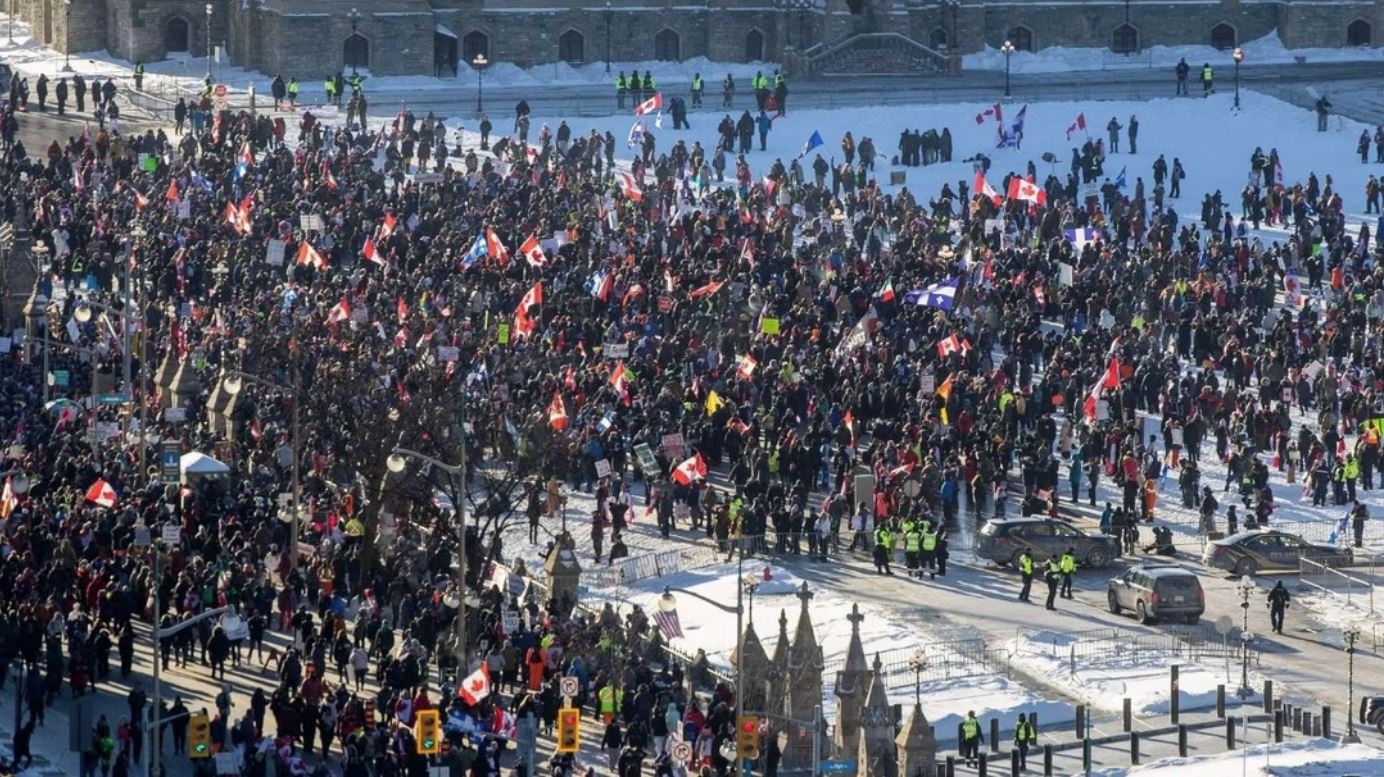 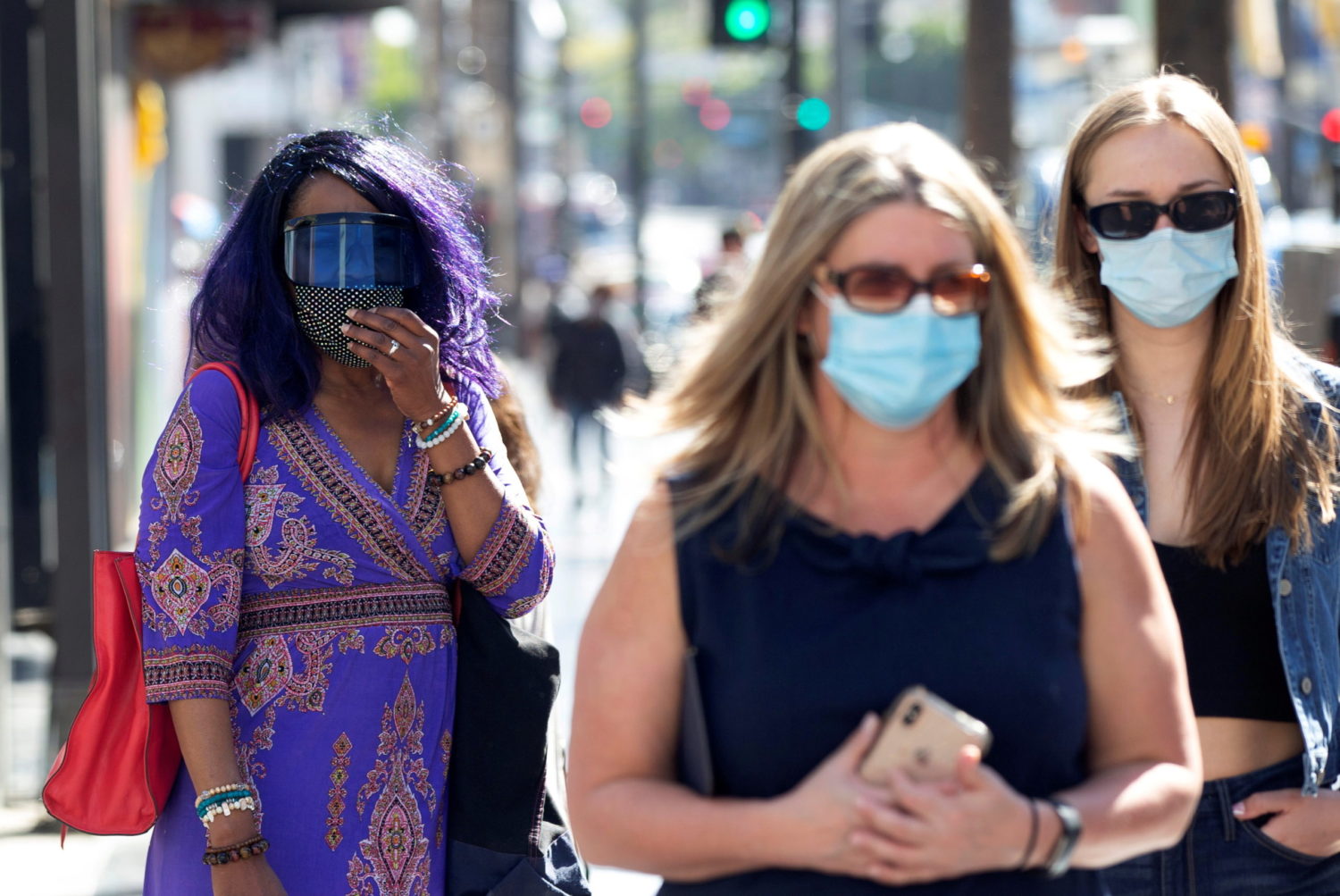 (Reuters) -Los Angeles County will reimpose its mask mandate this weekend in the latest sign that public health officials are struggling with an alarming rise in coronavirus cases tied to the highly contagious Delta variant.

The county, home to 10 million people and the nation’s second-largest city, Los Angeles, is one of several jurisdictions to recommend or mandate wearing masks or other pandemic restrictions in recent days as cases rise to worrisome levels in many parts of the United States.

“We’re requiring masking for everyone while indoors at public settings & businesses, regardless of vaccination status so that we can stop the increased level of transmission we’re seeing,” the Los Angeles County Department of Public Health said on Twitter Thursday.

The mandate will go into effect Saturday night at a minute before midnight, the agency said.

The announcement follows six straight days of more than 1,000 new COVID-19 cases reported in Los Angeles County, with nearly 400 people hospitalized with COVID-19 as of Wednesday, up 275 from the week before. Nine new COVID-19 deaths were reported on Wednesday.

More than 1,500 new infections were reported on Thursday, and the county has become a place of “substantial” transmission, based on criteria set by the U.S. Centers for Disease Control and Prevention (CDC), the Los Angeles County health officer, Dr. Muntu Davis, said in remarks provided to reporters.

Other California counties and other states are also grappling with a spike in coronavirus cases, led by a mutation of the coronavirus known as the Delta variant and predominantly affecting people who are unvaccinated.

Also on Thursday, Sacramento and Fresno Counties in California recommended that masks be worn indoors even by people who are vaccinated. Austin, Texas, on Thursday urged people who are not vaccinated or are otherwise high-risk to avoid travel, indoor gatherings, dining out and shopping, and to wear masks.

Earlier this week, Yolo County in California also recommended indoor masking, and in Springfield, Missouri, children and teachers have been required to wear masks during summer school.

“Everyone, including those who are vaccinated, should be aware of high-risk situations including being indoors, in crowds, and around unvaccinated and unmasked individuals and consider wearing a face covering in these settings,” said Fresno County Public Health physician Dr. John Zweifler.

Data from the CDC show high levels of coronavirus transmission in numerous states, including Missouri, Mississippi, Florida, Nevada and Utah.

Across the country, health officials urged residents who have not yet done so to become vaccinated. Vaccines are approved and available for all people as young as 12 years old. In Los Angeles County, just 0.09% of new cases were among people who had been vaccinated, officials said.

“Our best protection against COVID-19 continues to be the vaccine,” said Sacramento County Public Health Officer Olivia Kasirye. “We urge all eligible residents to get vaccinated in order to protect themselves, and their family and friends.” 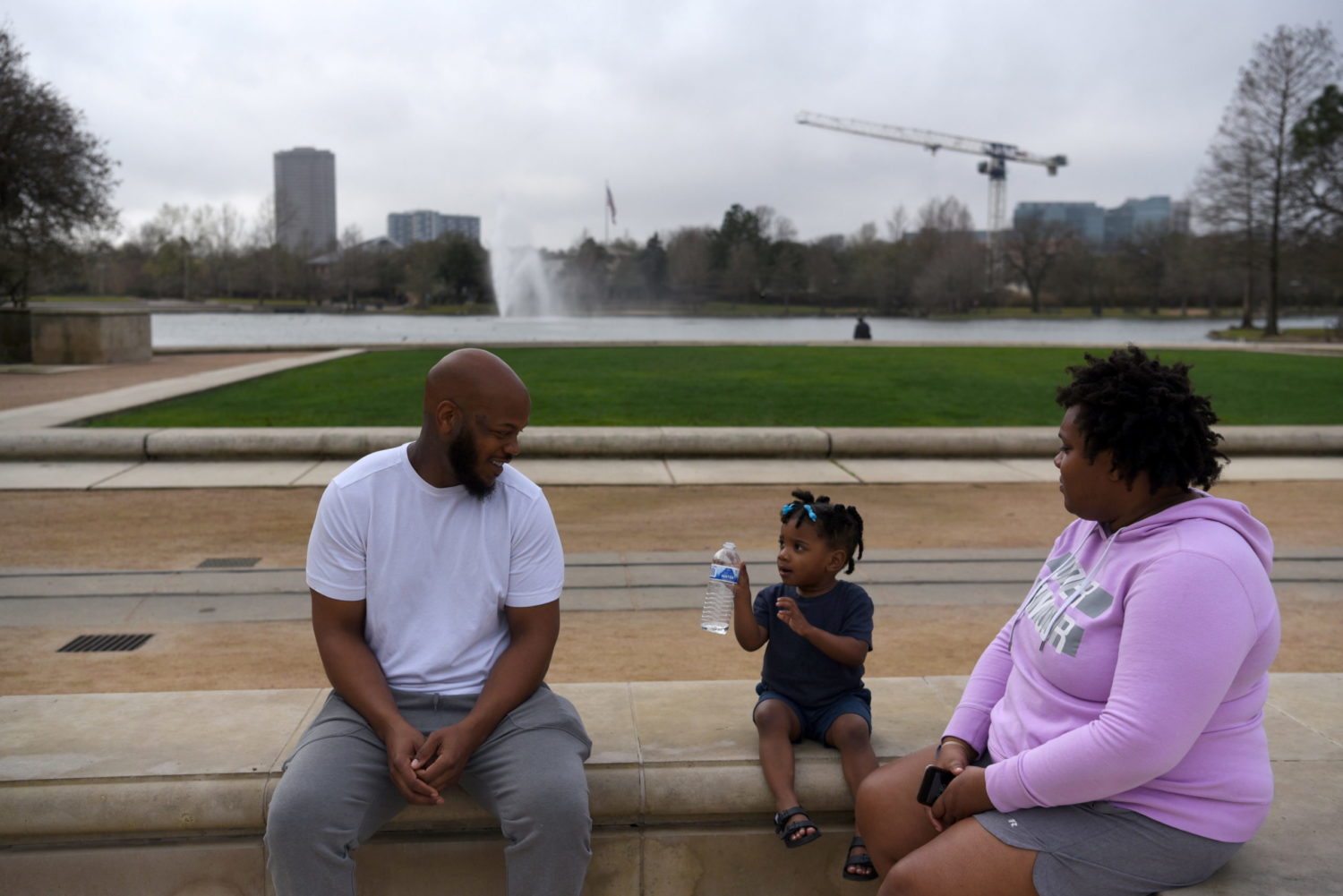 LUBBOCK, Texas (Reuters) – Texans awoke on Wednesday with a statewide mask mandate and occupancy restrictions in businesses lifted, a move some heralded as freedom and others as foolishness.

On paper, Texas’ rollback of coronavirus mitigation efforts is the most sweeping seen in the United States, along with a similar measure in Mississippi. In practice, vast swaths of Texas have rarely enforced mask or occupancy mandates in the past year, anyway.

Several major retailers, grocery and restaurant chains in Texas said they would still require that masks be worn in their stores, which under Abbott’s order relaxing restrictions is their right to do.

Still, some expected to see standoffs between maskless customers and store employees on Wednesday.

Texas was one of the first states to reopen its economy after the first wave of pandemic cases last May, and the nation’s second most populous state led the way again last week when Governor Greg Abbott announced the relaxation amid declines in new daily COVID-19 cases and with the rollout of vaccines.

As of Sunday, 18% of the U.S. population had received at least one dose of a vaccine, according to the Centers for Disease Control.

County officials in regions where COVID patients take up 15% or more of hospital beds for seven consecutive days can enact new mask and occupancy restrictions, under Abbott’s order, but no regions are currently in that situation.

The Texas Education Agency’s guidance for public schools is for the continued use of masks, while nursing homes in the state will not loosen restrictions.

The Dallas Jewish Conservatives organization plans to host a party Wednesday evening with about 200 people. There will be a moment of silence for the pandemic’s dead, refreshments for the guests and a bonfire into which folks will be encouraged to toss masks.

“It’s about freedom, liberty and personal responsibility,” said Benjie Gershon, founder of the group. “The act of throwing a mask into the bonfire … is in no way meant to belittle or undermine the tragic numbers of individuals who have fallen ill to COVID.” 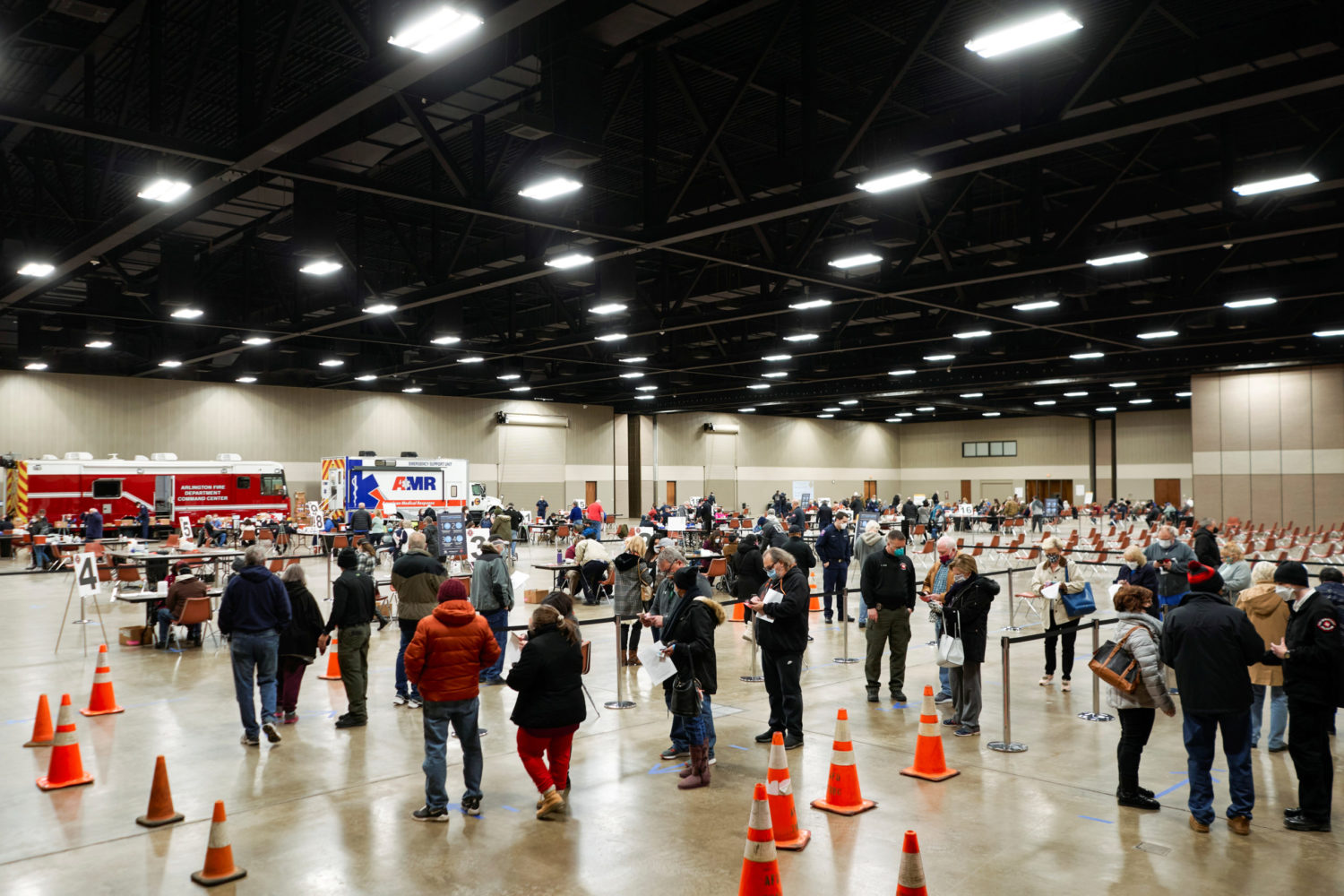 (Reuters) – Alabama’s governor said on Thursday she was extending the state’s mask mandate for another month, heeding the advice of health experts and breaking with decisions by neighboring Mississippi and Texas earlier this week to lift their requirements.

Alabama’s mask mandate, due to expire on Friday, will remain in effect to April 9, but no longer, Governor Kay Ivey said.

“After that, it’ll be personal responsibility,” the Republican said at a briefing, adding that she plans to continue wearing her mask beyond that date. “Folks, we’re not there yet, but goodness knows we’re getting closer.”

The contrasting moves on masks in the three Southern states comes at a time when the number of new coronavirus infections, hospitalizations and deaths had been sharply falling in the United States after a surge that followed the holiday season.

The improving metric in part reflects an acceleration of the drive to distribute the COVID-19 vaccines that have been approved for emergency use by the U.S. Food and Drug Administration. A third authorized vaccine from Johnson & Johnson began going into arms this week.

Even so, health authorities have stressed the need for caution, urging Americans to keep wearing masks, practice social distancing and other measures to prevent the spread of the virus amid concerns that declines in new infections was plateauing with highly contagious newer virus variants widely circulating.

“Now is not the time to pull back,” Dr. Anthony Fauci, the nation’s top infectious disease official and President Joe Biden’s COVD-19 medical adviser, told MSNBC on Thursday in an interview.

“We were going in the right direction. Now is the time to keep the foot on the accelerator and not pull off,” he said, referring to the announcements that Texas and Mississippi were lifting mask mandates.

Since the pandemic reached the United States early last year, the country has recorded 28.9 million cases and more than 519,000 deaths, more than any other country in the world.

Texas, Mississippi and Alabama are near the bottom of the list of states in terms of administering vaccines, according to the U.S. Centers for Disease Control and Prevention based on the number of people per thousand who have gotten at least one dose. The governors of all three states are Republicans.

The delay in lifting the Alabama mandate will enable more of its 4.9 million residents to be inoculated after the state just administered its 1 millionth dose of vaccine, Ivey said.

Ivey did announce an end to indoor dining restrictions on restaurants and said summer camps can plan to reopen. She is also permitting senior centers to resume outdoor programs and increase the maximum number of visitors from one to two.

Among the improvements she cited was a 77% drop in COVID-19 hospitalizations from its Jan. 11 peak to its lowest level since last June.

“While I’m convinced that a mask mandate has been the right thing to do, I also respect those who object, and believe that this was a step too far in government overreach,” she said.

Even as he urged Americans to stay vigilant, Fauci expressed optimism about a gradual return to normalcy by the end of the summer or early fall if the vaccine rollout goes smoothly, the majority of Americans agree to be vaccinated and new virus variants prove to be manageable. 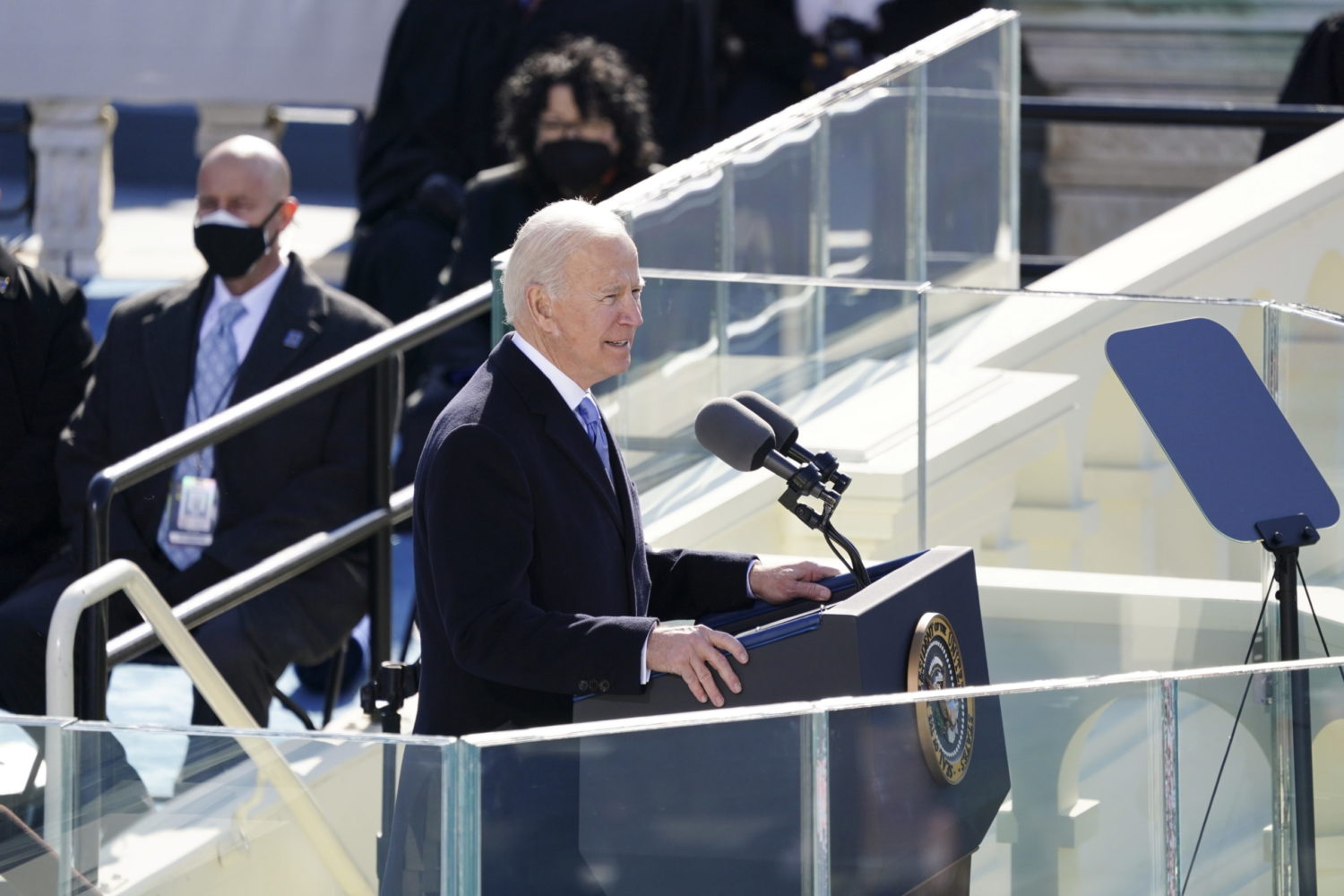 By Susan Heavey and Patricia Zengerle

WASHINGTON (Reuters) – President Joe Biden on Wednesday will immediately reset the nation’s response to the COVID-19 crisis when he heads to the Oval Office after being sworn in to lead a country reeling from its worst public health crisis in more than a century.

As part of a first sweep of executive actions, Biden will order that all federal employees wear masks and make face coverings mandatory on federal property. He will establish a new White House office to coordinate the coronavirus response and halt the withdrawal of the United States from the World Health Organization, a process initiated by former President Donald Trump.

Biden was also poised to nominate an acting U.S. surgeon general as soon as Wednesday, a person familiar with the decision told MSNBC, following the resignation of Trump appointee Jerome Adams.

Biden’s executive actions, particularly the mask mandate, are intended to set an example for state and local officials to rein in the virus, which has hobbled the U.S. economy. The United States has reported nearly 200,000 new COVID-19 cases and 3,000 deaths per day on a seven-day rolling average, according to Reuters data. More than 123,000 Americans were hospitalized with COVID-19 as of Wednesday.

Scientists and public health experts have said face masks can help prevent the spread of the highly contagious novel coronavirus, but the coverings have become a flashpoint in American life reflecting the nation’s larger political divide.