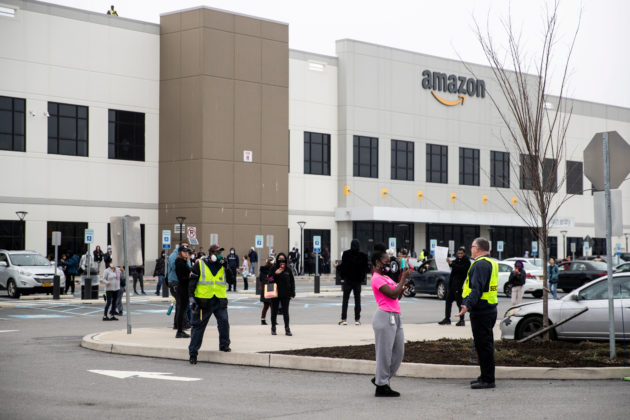 FILE PHOTO: Protesters are seen at Amazon building during the outbreak of the coronavirus disease (COVID-19), in the Staten Island borough of New York City, U.S., March 30, 2020. REUTERS/Jeenah Moon/File Photo

(Reuters) – Amazon.com Inc is testing the use of disinfectant fog at a warehouse in Staten Island, New York starting on Tuesday, the company told Reuters, following worker protests over the risk of coronavirus infection at the site.

The measure shows how the world’s largest online retailer is aiming to increase safety cleaning without closing facilities essential to its operation, as some workers and elected officials have demanded.

Amazon said it is trying out disinfectant fog as used by airlines and hospitals to further sanitize its facilities. The pilot program follows an announcement last week that the company would check workers’ temperature and make masks available at all U.S. and European sites in its operations network.

“We continue to explore even more preventative measures to support the health and safety of employees, who are providing a critical service in our communities,” Amazon said in a statement.

The New York warehouse, known internally as JFK8, is one of several locations where small groups of Amazon employees have walked out to highlight the risks they face from working where colleagues have become infected with the virus, which causes the sometimes deadly COVID-19 respiratory illness.

The virus has led to at least 80,000 deaths globally and infected more than 1.4 million people – including workers at more than 50 Amazon facilities, according to a New York Times report. New York is currently the epicenter of the U.S. outbreak with by far the most confirmed COVID-19 cases and related deaths.

The company has said it is requiring staff to keep safe distances from each other.

The Staten Island warehouse drew particular attention after Amazon fired an employee on paid quarantine for participating in a protest last week that he helped organize.

The United Food and Commercial Workers International Union called on company executives to resign after an internal document leaked, in which Amazon’s general counsel described that employee as “not smart, or articulate.”

The general counsel then issued a statement saying frustration over the health risks created by the employee had clouded his judgment.