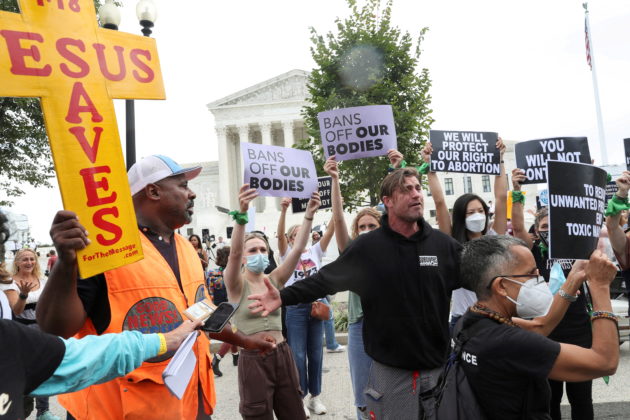 FILE PHOTO: People protest for and against abortion rights outside of the U.S. Supreme Court building in Washington, D.C., U.S. October 4, 2021. REUTERS/Leah Millis

WASHINGTON (Reuters) – The U.S. Supreme Court’s decision to leave in place a Texas law banning most abortions has opened the door for states to seek to restrict other rights including guns by copying the measure’s novel enforcement mechanism, though it remains to be seen how many will actually do it.

The Republican-backed Texas law takes enforcement away from state officials, instead empowering private citizens to sue anyone who performs or assists a woman in obtaining an abortion after embryo cardiac activity is detected – at about six weeks of pregnancy – with awards of at least $10,000 for successful lawsuits. The Supreme Court issued its ruling on Friday.

California Governor Gavin Newsom, a Democrat, said the next day that he directed his staff to work with legislators and the state’s attorney general on a bill that would similarly enable private citizens to sue anyone who manufactures, distributes or sells assault weapons or self-assembled “ghost guns,” also with at least $10,000 in damages.

New York Attorney General Letitia James, another Democrat, said in an appearance on Tuesday on ABC’s program “The View” that she would support a similar effort in her state.

“We need to follow his lead,” James said, referring to Newsom.

President Joe Biden has urged the U.S. Congress to pass national gun restrictions, but Democratic-backed legislation over the years has been stymied by Republican opposition.

Legislators in five other Republican-led states have introduced abortion bills modeled on the Texas law, similarly structured to avoid judicial review, according to the Center for Reproductive Rights, a legal advocacy group favoring abortion rights. None have yet been enacted.

The Texas law, known formally as S.B. 8, was designed to be difficult for courts to block because it removed state officials from enforcement, making it is hard for challengers to figure out who to sue and obtain a ruling that would halt it statewide. The Supreme Court largely accepted that construct while allowing abortion providers to proceed with a legal challenge aimed at some medical licensing officials.

‘A BIT OF AN INVITATION’

Critics have said that ruling would allow states to enact laws that circumvent other recognized rights such as LGBT and religious rights as well as guns.

“The court is not pushing back on the use of S.B. 8-style laws to infringe constitutionally protected rights. I do think this is a bit of an invitation to other states,” said David Noll, a professor at Rutgers Law School in New Jersey.

States seeking to roll back abortion rights may in the near future not need to resort to novel mechanisms like the Texas law to avoid running afoul of Supreme Court precedent on abortion. The conservative justices who hold a 6-3 majority on the court indicated during oral arguments on Dec. 1 in a case from Mississippi that they are willing to undercut or even overturn the landmark 1973 Roe v. Wade ruling that legalized abortion nationwide.

In Illinois, one Democratic legislator has proposed targeting gun dealers with a measure similar to the one California is discussing. National gun control activists sound noncommittal.

Stacey Radnor, a spokesperson for the gun-control group Everytown for Gun Safety, said in a statement that Newsom’s proposal is “an interesting approach that we’re going to examine further as we get more details.”

“If they really wanted to be the full-blown aggressive so-and-sos that Texas has been, they would ban handguns,” said Erik Jaffe, a lawyer who filed a brief at the Supreme Court on behalf of the Firearms Policy Coalition gun rights group that has been critical of the Texas law, said of California.

Jaffe said Newsom, who in September survived a recall election, “might not survive the political fallout” of such a measure.

James White, a Republican member of the Texas House of Representatives who supports the state’s abortion law, questioned in a letter to the state’s attorney general whether private individuals are bound by the Supreme Court’s 2015 ruling legalizing gay marriage nationwide. But White said in an interview he does not anticipate a state law similar to the abortion law targeting the rights of same-sex couples.

“The Supreme Court has ruled that who people decide to get married to is left to their discretion. I don’t know how you would get into civil litigation,” White said.

Advocacy groups for LGBT people said they have not heard of any such proposals.

“I have not, and I hope I never do,” said Shannon Minter, legal director of the National Center for Lesbian Rights, adding that any such measures could run into other legal problems because they would be unlawfully discriminatory.

(Reporting by Lawrence Hurley; Editing by Will Dunham and Scott Malone)