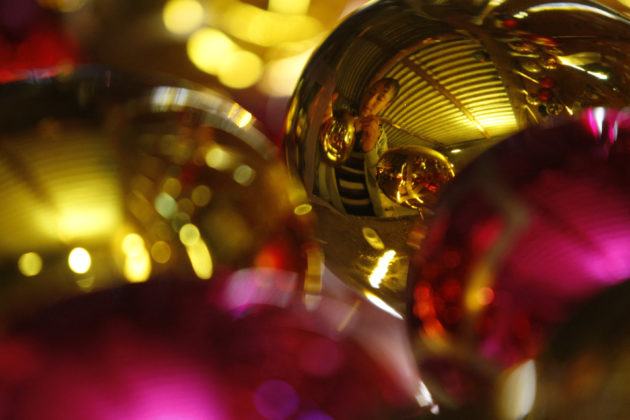 FILE PHOTO: A woman painting a Christmas ornament is reflected on a bauble at a workshop in the village of Chignahuapan in the state of Puebla December 13, 2011. REUTERS/Imelda Medina

TLALPUJAHUA, Mexico (Reuters) – In Tlalpujahua, Mexico, the spirit of Christmas is baked into the small town’s very existence.

While people around the world prepare to decorate Christmas trees and buy gifts to celebrate the holiday, in Tlalpujahua thousands of workers do the delicate work of blowing glass into Christmas ornaments that are then hand-painted.

“We are a people who are very creative and we have developed this industry ourselves, from our art,” baubles maker Jose Luis Munoz told Reuters Television. “And clearly we are committed to making Mexican families and families from around the world feel good this coming Christmas.”

Munoz is one of more than 2,000 people in Tlalpujahua, located about 100 miles (160 km) northwest of Mexico City in the state of Michoacán, who are employed directly in making Christmas ornaments. They produce millions of ornaments each year.

Artisans hand-blow glass over a 750-degree Celsius (1,382 Fahrenheit) flame, transforming long glass tubes into shapes ranging from standard round baubles to flowers, apples, birds and bells. They are then painted with sparkling colors.

Most of the ornaments, about 60%, are shipped overseas, to the United States and Canada, as well as Europe, Japan and Malaysia.

The ornaments are popular with visitors to the town, as well.

“I think that this is a craft like no other and I think the work of artisans from Michoacán is very beautiful,” said Consuelo Herrera, a visitor.

Tlalpujahua once thrived on income from gold and silver mines, but it fell on hard times after a 1937 mudslide shut down most mining.

It underwent a renaissance after a local man, Joaquin Munoz Orta, returned from Chicago where he had learned to make ornaments while working in a factory that produced artificial Christmas trees. He set up a workshop that grew steadily and inspired others in the town to also make ornaments.