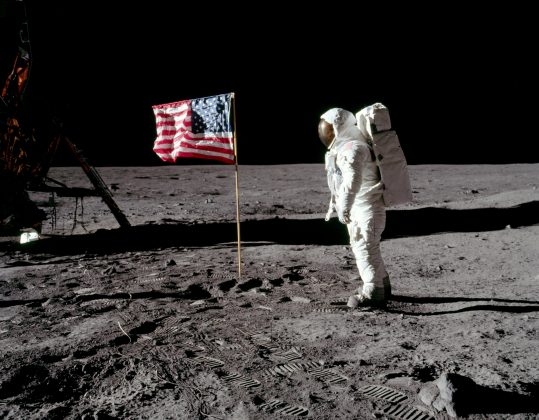 Astronaut Buzz Aldrin, lunar module pilot for Apollo 11, poses for a photograph beside the deployed United States flag during an extravehicular activity (EVA) on the moon, July 20, 1969. The lunar module (LM) is on the left, and the footprints of the astronauts are visible in the soil. Neil Armstrong/NASA/Handout via REUTERS

By Alex Dobuzinskis and Jeremy Schultz

(Reuters) – The Apollo 11 astronauts who made mankind’s first visit to the moon 50 years ago were trained in how to take pictures for science. Back on Earth, some of those photos became pop culture touchstones.

People collected and shared prints of the Apollo 11 landing and moonwalk, which also became the basis for artist Andy Warhol’s colored prints “Moonwalk” and for MTV’s logo when the music channel launched in 1981.

The Apollo 11 astronauts – Neil Armstrong, Buzz Aldrin and Michael Collins – were not trained in how to take photographs of each other but those were the ones that became most popular, said Jennifer Levasseur, curator of the space history department at the Smithsonian National Air and Space Museum.

“The photographs of people are what make it real for everybody back on Earth. We can sort of understand it because we can put ourselves in their place,” Levasseur said.

Armstrong had the instinct to photograph Aldrin standing alone and told him – by radio transmission – to turn around for a picture, Levasseur said.

Another famous photo of Aldrin, showing him standing by an American flag, took more planning, she said. MTV used that picture to market itself, replacing the flag with its own logo.

Still photography from the Apollo 11 moonwalk was captured on cameras specially built by the Swedish company Hasselblad to mount on an astronaut’s chest. All they had to do was point their body in the right direction, adjust the settings if necessary and pull a trigger.

All three Apollo 11 crew members were encouraged to take the bulky cameras on family vacations to familiarize themselves with their unusual operation, according to a NASA website. 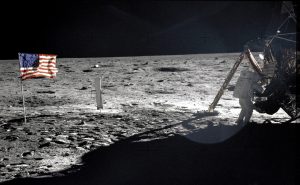 Armstrong, the first human to set foot on the lunar surface, and Aldrin had one camera for their moonwalk and they had planned to share it. However, Armstrong had the camera for almost the entire two-and-a-half-hour landing. As a result, nearly all the still photographs showing an astronaut on the moon are of Aldrin, the website says.

NASA noticed this embarrassing omission as the agency struggled to find a photo of the first man to walk on the moon actually walking on the moon.

Its staff, however, found it almost impossible to tell Aldrin and Armstrong apart. A personalized armband was added to every spacesuit after Apollo 11, the NASA website says.