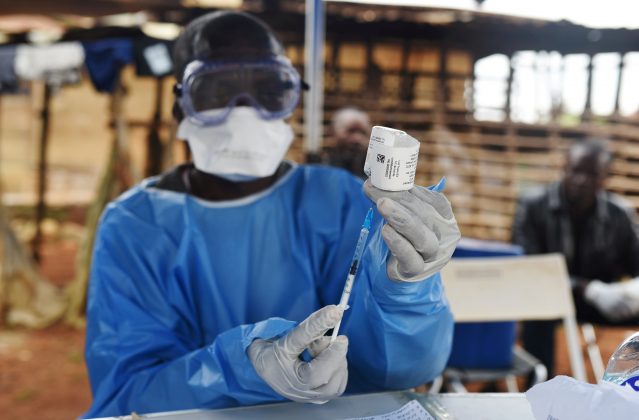 FILE PHOTO: A Congolese health worker prepares to administer Ebola vaccine, outside the house of a victim who died from Ebola in the village of Mangina in North Kivu province of the Democratic Republic of Congo, August 18, 2018. REUTERS/Olivia Acland/File Photo

GENEVA (Reuters) – A Congolese woman who died of Ebola this month vomited four times in a Ugandan market after crossing the border days earlier to sell fish, the WHO said, fuelling fears that the virus may be spreading beyond the Democratic Republic of Congo.

The current outbreak of the highly infectious disease has been all but confined to Congo, killing 1,673 people there – more than two-thirds of those who contracted it – over the past year, and three in Uganda last month.

A World Health Organization panel is debating whether to declare the outbreak “of international concern”, a designation that the agency’s head suggested a case this month in the large Congolese city of Goma had made more likely.

The fisherwoman traveled across the border to Mpondwe market on July 11, according to a Ugandan Health Ministry report published on Wednesday by the WHO.

It said 19 fishmongers were listed as having had possible contact with her while another 590 could be targeted for vaccination.

The health response to the virus relies on tracking down and testing people who may have been exposed to it and vaccinating them and anybody they have had contact with.

Ugandan and Congolese officials were working to find people who might have been put at risk by the dead woman, who appeared to have used an illegal border crossing, health ministry spokesman Emmanuel Ainebyona said.

So far “no one has been found to be positive of the Ebola virus. The team is still monitoring the tested traders,” he said.

The report said health workers had not established where the fishmonger spent nights, who transported her merchandise and who cleaned up her vomit.

The Ministry and the WHO said there were currently no confirmed Ebola cases in Uganda.

The WHO’s emergency committee of international experts were meeting on Wednesday for a fourth time to consider if the 11-month outbreak constituted a “public health emergency of international concern” (PHEIC), and will announce their decision at 1700 GMT.

A PHEIC declaration would be just the fifth in WHO history and include recommendations for international action. It could also help unlock sorely needed funds.

Last month the committee decided the potential disruption of declaring one risked causing economic harm while achieving nothing.

But WHO chief Tedros Adhanom Ghebreyesus said this week that the case in Goma was a potential game-changer since it meant Ebola might now spread among the urban population and into neighboring Rwanda.

A separate WHO report cited a very high risk for Uganda’s Arua district, which borders a Congolese area where an Ebola patient died after having had contact with over 200 people. Two deaths in Arua were under investigation.