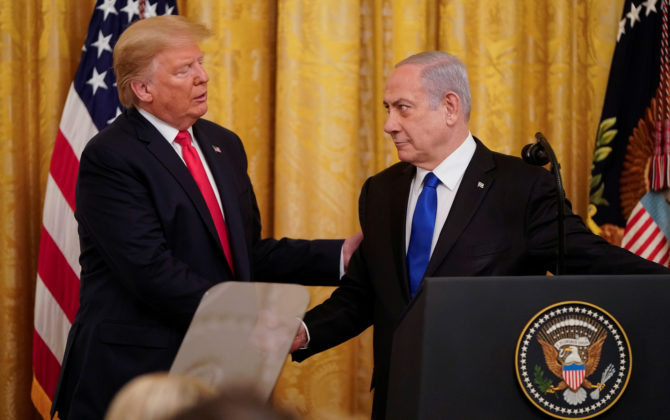 Arabs prioritize key ties with U.S. against Iran in reacting to Trump peace plan
By Stephen Kalin and Amina Ismail

RIYADH/CAIRO (Reuters) – Arab powers appear to be prioritizing close ties with the United States that are vital to countering Iran over traditional unswerving support for the Palestinians in their reaction to President Donald Trump’s Middle East peace plan.

At a White House event on Tuesday with Israeli Prime Minister Benjamin Netanyahu, Trump proposed creating a Palestinian state but demilitarized and with borders drawn to meet Israeli security needs, while granting U.S. recognition of Israeli settlements on occupied West Bank land and of Jerusalem as Israel’s indivisible capital.

The plan diverges from previous U.S. policy and a 2002 Arab League-endorsed initiative that offered Israel normal relations in return for an independent Palestinian state and full Israeli withdrawal from territory captured in the 1967 Middle East war.

Saudi Arabia’s response exemplified the careful balance now required from Gulf Arab monarchies, Egypt and Jordan which rely on U.S. military or financial backing and find themselves aligned with the United States and Israel in confronting Iran.

The Saudi Foreign Ministry expressed appreciation for Trump’s efforts and support for direct peace negotiations under U.S. auspices. At the same time, state media reported that King Salman had called the Palestinian president to reassure him of Riyadh’s unwavering commitment to the Palestinian cause.

Egypt and Jordan, which already have peace deals with Israel, as well as Bahrain, Qatar and the United Arab Emirates (UAE) used similar language that swung between hope for re-starting talks and caution against abandoning long-held stances.

Despite Palestinians’ rejection of the plan and boycott of Trump over perceived pro-Israel bias, three Gulf Arab states – Oman, Bahrain and the UAE – attended the White House gathering in a sign of changing times.

In a bitterly divided Arab world, backing for Palestinians has long been seen as a unifying position but also often a source of internal recriminations over the extent of that support, especially as some states have made independent, pragmatic overtures to historical adversary Israel.

Critics were less kind, condemning the envoys’ presence as a “shameful” abandonment of the Palestinian cause.

“No government or ruler wants to be seen to sell Palestine so cheaply and hand Netanyahu such a victory and, in fact, end up footing the bill,” said Neil Quilliam, senior research fellow at Britain’s Chatham House think-tank.

“At the same time, all states except perhaps Egypt are dependent upon the U.S. and will not risk angering Trump, given his propensity to act like a petulant child.”

Saudi King Salman has previously reassured Arab allies he would not endorse any plan that fails to address Jerusalem’s disputed status or Palestinian refugees’ right of return, amid perceptions Riyadh’s stance was changing under Crown Prince Mohammed bin Salman, who is close to Trump’s son-in-law and senior adviser Jared Kushner, the plan’s main architect.

Palestinian officials say Prince Mohammed, the de facto Saudi ruler, has pressed Abbas in the past to support the Trump plan despite serious concerns. Saudi officials have denied any differences between the king and crown prince.

Naif Madkhali, a prominent Saudi who tweets often in support of the government, blasted Trump’s plan: “No and a thousand no’s,” he wrote under the hashtag #Down_with_the_deal_of_the_century.

In Bahrain, which hosted a U.S.-led conference last June on the Palestinian economy as part of Trump’s broader peace plan, opposition groups came out strongly against the proposal.

“Whoever today gives up the Holy Land of Palestine will tomorrow give up his land in order to preserve his seat,” tweeted Waad party leader Ibrahim Sharif. “Treachery is a stab in the back and is not a point of view.”

Any change to the consensus on refugees’ right of return to what is now Israel and the Palestinian Territories would reverberate loudest in Jordan, which absorbed more Palestinians than any other country after Israel’s creation in 1948.

Palestinians, which by some estimates now account for more than half of Jordan’s population, hold full citizenship but are marginalized and seen as a political threat by some people of Jordanian descent.

“The biggest risk is to Jordan, where sentiment towards the issue and rising levels of discontent converge,” said Quilliam.

Analysts predicted most Egyptians would reject the plan but not present a problem to President Abdel Fattah al-Sisi’s government, which has already cracked down harshly on dissent.

“I feel angry and helpless as an Egyptian, an Arab, a Muslim and above all a human…” prominent blogger Zainab Mohamed wrote of Trump’s plan.

“Following the revelation of details of the American-Israeli conspiracy, it is unacceptable to hide behind ambiguous and murky statements in order to escape confronting this conspiracy,” it said in a statement.

However, a spokesman for Abbas said later he had received calls from Saudi King Salman and Lebanese President Michel Aoun “supportive of the Palestinian position”.