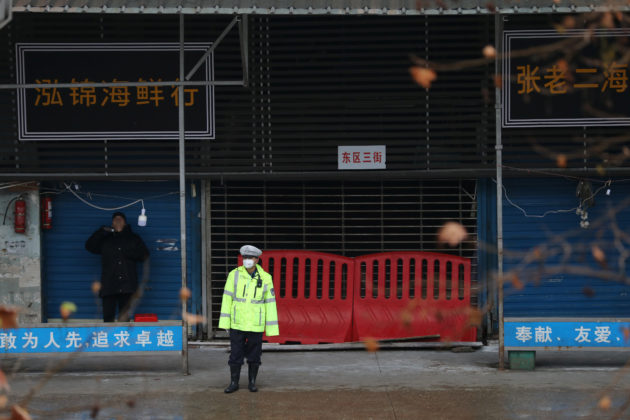 (Reuters) – Apple said it had baked into its outlook uncertainty related to a virus outbreak in China that has killed 132 and infected nearly 6,000. Starbucks  warned results would be hit after it shut over half its cafes in the country.

Companies also restricted travel to China and asked staff there to work from home.

Here’s what large companies have said about the outbreak:

* Facebook suspended non-essential travel to mainland China and told employees who had traveled to China to work from home.

* Alibaba asked employees to work from home for a week after an extended Lunar New Year break ends on Feb. 2. Tencent extended holidays until Feb 9.

* Tiktok owner Bytedance asked employees who traveled during the holidays to quarantine themselves at home for 14 days. E-commerce firm Pinduoduo and UBS Group have advised similar action.

* HSBC banned travel to Hong Kong and China, and asked employees who traveled to the mainland recently to quarantine themselves at home.

* Honda and Nissan flew back some employees to Japan from China on a government chartered flight.

* Novartis asked staff in China to work from home until Feb. 10.

* Volkswagen asked China staff to work from home for two weeks after the extended break ends.

* Toyota Motor, which restricted China travel, said it was halting operations in factories in the country through Feb. 9.

* Apple closed one of its retail stores in China and reduced hours at others, and restricted employee travel.

* Walt Disney shut its resorts and theme parks in Shanghai and Hong Kong during what is likely the busiest time of the year.

* Yum China temporarily closed some KFC and Pizza Hut stores in Wuhan, and Luckin Coffee closed its cafes in the city.

* H&M closed 45 stores and suspended business travel to and within China. Staff arriving from China are advised to stay home for 14 days.

* Swatch closed five stores in Wuhan and suspended travel to and from China.

* British Airways suspended all direct flights to and from China until at least Jan. 31. Finnair suspended routes to Nanjing and Beijing until end-March.

* Cathay Pacific and Cathay Dragon will cut capacity to and from mainland China by half or more from Jan. 30 to end-March. The airline will rebook, reroute or refund tickets booked on or before Jan. 28 for travel by March 31 to or from mainland China.

*InterContinental Hotels will allow customers to change or cancel stays scheduled up to Feb. 3 across mainland China, Hong Kong, Macau and Taiwan.

*Hyatt Hotels said guests who booked stays through its official channels and are cancelling due to the coronavirus outbreak, or are Chinese guests outbound to its Asia Pacific hotels, can cancel stays or change dates for free.

* Ctrip, China’s largest online booking platform, said more than 300,000 hotels on its platform had agreed to refunds on bookings between Jan. 22 and Feb. 8. Refunds also include flight tickets, cruises and car rentals.