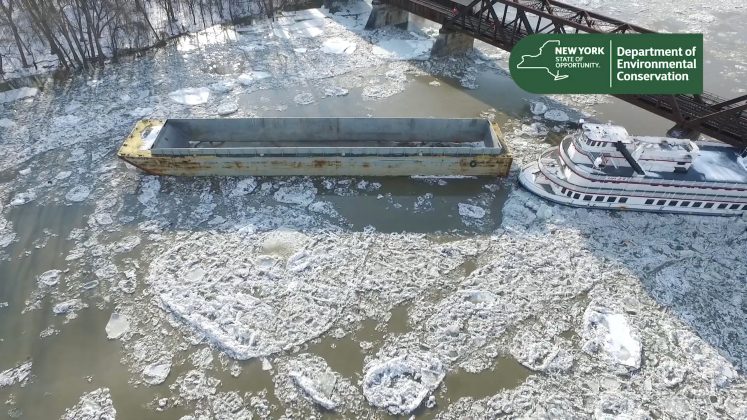 A boat collides under the rail bridge near the Corning Preserve, after breaking lose from its dock on the upper Hudson River and floating down stream towards Albany, New York, U.S., January 25, 2019, in this still image taken from a video obtained from social media. New York State Department of Environmental Conservation/via REUTERS

(Reuters) – The U.S. Midwest and Northeast were braced for dangerous subzero temperatures this week, as the polar vortex was set to blast arctic conditions unusually far south, the National Weather Service said on Monday.

The system was set to extend from the Dakotas through New England, with Chicago expecting temperatures to plunge as low as -25 degrees Fahrenheit (-32 Celsius) overnight Tuesday into Wednesday, the weather service said.

The polar vortex – the frigid winds that circulate around the North Pole – is extending further south into the Upper Midwest, said weather service meteorologist Brian Hurley.

“If you live up in the Arctic Circle, you’d say this is pretty normal. When it’s actually brought down to this level, that’s when you know it’s something serious,” Hurley said in a telephone interview.

Blizzard conditions are predicted across parts of the western Ohio Valley and snow is expected Tuesday through Wednesday from the Great Lakes region into New England, the weather service said.

Snowfall will occur in the Dakotas, Minneapolis and St. Paul, Minnesota; and in Central Michigan, where a foot (30 cm) or more of snow is expected, the weather service said. Upstate New York, Vermont and New Hampshire will see less than a foot of snow, and Boston will get less than an inch (2.5 cm).

Chicago will take the main brunt of the supercold weather, with widespread heavy snow already affecting the area on Monday, the weather service said on Twitter. Wind chills as low as -50 F (-46C) were also expected by Tuesday evening through Thursday morning.

The service’s Des Moines, Iowa, branch said “dangerous, life-threatening cold air” will hit the Midwestern state from Tuesday morning through Friday morning, with wind chill values on Wednesday likely to range from minus 45 Fahrenheit (minus 43 C) to minus 55 Fahrenheit (minus 48 C) across the northern part of the state.

Delta Air Lines Inc said it would waive flight change fees for passengers affected by the winter weather in Chicago, Detroit and areas of the Upper Midwest.